With new stringent regulations against pollution being introduced, it is important for the manufacturers to build marine engine that satisfy these norms and do not hamper the normal operation of the engine. To achieve this, engines are provided with several automation systems, which not only reduce the pollution level but also increase the efficiency of the engine and reduce other operational cost.

One such introduced automation is lambda control which controls the fuel injection system of the marine engine according to the variation in the load on the same. 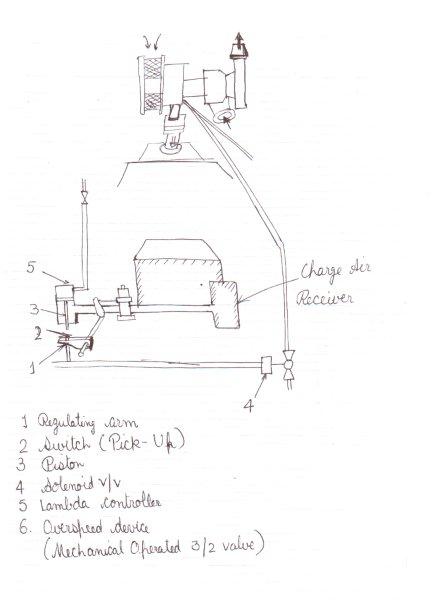 The main function of any engine is to supply enough power so that it can handle the load put on it. The load may increase or reduce during the operation and to accompany this, some excess fuel may be given to keep up the performance.

This is done by controlling the two main elements which are responsible for combustion- fuel and air. This controller senses the relation between the charge air pressure and fuel index of the engine at that load.

The working of Lambda controller can be understood with the help of the following diagram:

When there is a sudden momentary increase in the engine load, the lambda control will regulate the fuel through injection pump using the regulator arm. For this, (1) is turned on which in-turn commands the switch (2) to touch the Piston arm (3) and be pushed downward, where in the electric circuit will be closed.

Hence, solenoid valve (4) will open which will then actuate the jet system to accelerate the turbocharger resulting in increase in charged air pressure. This will result in pressing the piston (3) back in the lambda cylinder (5). When the lambda value or lambda ratio is satisfactory, then the solenoid valve will get closed, deactivating the jet system.

When the system is activated for more than 10 seconds, then the solenoid valve is signaled to shut off and there is an alarm for system failure

During the start procedure, the lambda controller is used as an index limiter.