An offshore oil rig, a floating city on the ocean, is a city that never sleeps. Though you must have heard about the life on this wonderful floating platform, there are few things you might not be aware of. The first and foremost thing is to note that life on an oil rig is not all partying and gambling. It is in fact a gamble with one’s own life in trade for the dreaded death. Though the sentence might sound a bit exaggerated, it is not all untrue, foe one constantly encounters with deadly conditions while offshore on an oil rig. This article presents a life on an oil rig.

Looking for a life in the sea

Five thousand years ago was a time when demand for oil was much more than the supply of the same. Besides collecting the oil seeping through the ground through land oil wells, companies in the oil industry started exploring beyond and developed drilling of crude oil below the sea bed. It was in Gulf of Mexico that the open waters gained their first oil well structure. News spread and ever since new fields have been discovered including in the Scottish waters and the North Sea.

The Life on an Oil Rig

Life changes dramatically for the one who decides to step foot to work in this industry. Earlier life on an offshore oil rig was arduous and difficult but there has been a significant change and improvement in the living conditions. One needs to get outfitted to start work on the rig and hence safety glasses, hard hats, coveralls and steel-toed boots are issued on arrival. Regular safety trainings are given before and during employment. The work designated to a rig worker usually falls on an 8-12 hour shift with breaks for food in the morning, noon and night. One might have to do night shifts since this industry operates 24 hours a day and 7 days a week. But a two week work on the rig will earn the worker a holiday of almost three weeks.

And while on aboard a rig, one need not worry about the food or laundry or accommodation. Rooms with bunk beds are a common sight where one gets a womb like feeling with the slight swaying of the rig while sleeping. Also the rig has smoking zones where safety matches are provided to the smokers. Cinema, televisions in every room, gymnasium, indoor sports facilities like table tennis, computers with internet links are some other added benefits one enjoys on the rig along with the handsome payment earned for the work. 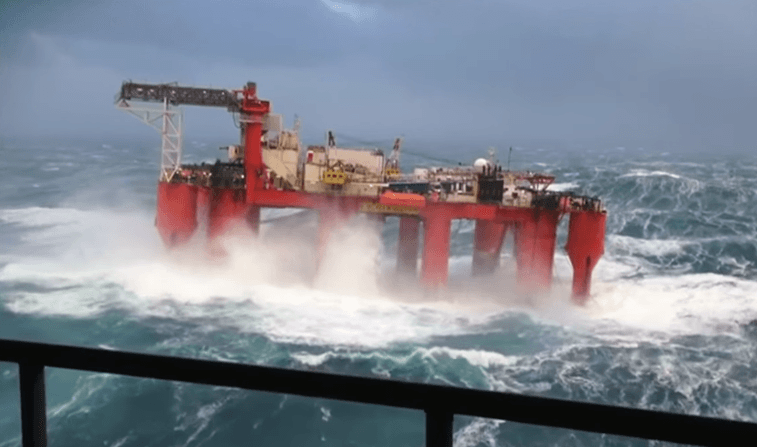 But despite all this, the one major risk of undergoing near death experiences every now and then on aboard the rig, is more than enough to defy all the enjoyment one can have.

The environment of the rig is pretty hostile as nature of operation of work involves regular occurrence of tragedies and accidents. Fluids that are flammable are drawn out of the earth, some of which is burnt in flames to separate poisonous sulfide gas from the same. Dangerous machinery are operated and work is even carried out at tall heights despite of whatever the climatic condition is, be it even stormy or windy.

Be it for a worker on the rig or off rig workers like the paramedics, housekeepers, and caterers etc., life on an oil rig falls into a situation of dilemma to choose for, since it involves the greatest of risks while providing equally tempting benefits of life.