The oceans and seas surrounding the continents offer several wonders, many of which are yet to be discovered by humans.

The vast bodies of water that cover over 70% of the planet’s surface, holding around 1.35 billion cubic kilometers of water, have plateaus, valleys, plains, mountains, and trenches.

And interestingly, the underwater formations are enormous compared to those on dry land.

The mountains situated in the ocean basin are higher than those we see on land; similarly, the plains are flatter, so the ocean trenches are much more profound.

Of all the features that oceans offer, the very depth of these water bodies makes them so enchanting. Indeed, the ocean is deep, and the average depth of the oceans and seas surrounding the continents is around 3.5km.

They are known as the hadal zone, and the deepest sea trenches are created by shifting tectonic plates.

Currently, there are 46 hadal habitats across the oceans, and humans know very little about these regions since it’s challenging to study these parts of the oceans. Here is a list of ten points that mark the deepest points of oceans.

Jacques Piccard and Don Walsh reached a 10,916 m depth in their Trieste bathyscaphe in 1960. The first unmanned vehicle to reach the Deep was controlled by the Woods Hole Oceanographic Institution’s researchers, reaching up to 10,902 meters.

Appearing as a crescent-shaped scar in the Earth’s crust, the trench measures around 2,550 km long, 69 km wide on average, and has a maximum depth of 10.91 km at the Challenger Deep. At the same time, some other efforts measured the deepest portion at 11.034 km. The deep runs several hundred kilometers in the southwest direction, towards the US island of Guam.

The deep holes in the Mariana trench were formed due to the collision of converging plates of the oceanic lithosphere. During the collision, one plate descended into the Earth’s mantle, and the downward flexure formed a trough at the line of contact between the plates.

At the bottom of the Marina Trench, the density of water is increased by 4.96% due to the high pressure at the seabed. However, the expeditions conducted at various times have observed the presence of large creatures such as flatfish, large shrimp-type amphipods, crustaceans, and even an unknown type of snailfish. Scientists believe there are many new species in the Mariana Trench awaiting discovery.

Located in the southwest Pacific Ocean and at the Kermadec Tonga Subduction Zone’s northern end, the Tonga Trench lies around 10.882 km below sea level. The deepest point in the Tonga trench, known as the Horizon Deep, is considered the second deepest point on Earth after the Challenger Deep and the deepest trench in the Southern Hemisphere.

Stretches at a distance of 2,500 km from New Zealand’s North Island northeast to the island of Tonga, the Tonga trench was formed due to the subduction of the Pacific plate by the Tonga plate.

Researchers have also found that these plate movements cause large volcanoes in the Japan trench and the Mariana trench. According to marine scientists, the sediments of the Horizon Deep houses a community of roundworms.

Another deepest part of the ocean belonging to the Pacific Ocean, this trench lies at a considerable depth of 10.5 km below sea level. Lying close to Kuril Island and off the coast of Kamchatka, this trench is responsible for many oceans bed volcanic activities in the region.

The trench was formed due to the subduction zone developed in the late Cretaceous, which created the Kuril island and the Kamchatka volcanic arcs.

Another submarine trench lies on the floor of the South Pacific Ocean. The Kermadec Trench stretches around 1,000 km between the Louisville Seamount Chain and the Hikurangi Plateau.

Formed by the subduction of the Pacific plate under the Indo-Australian Plate, the Kermadec Trench has a maximum depth of 1o.04 km.

Along with the Tonga Trench to the north, the Kermadec Trench creates the 2,000 km-long, near-linear Kermadec-Tonga subduction system.

The trench is also home to various species, including a giant amphipod, which measures approximately 34 cm in length at the bottom of the trench. A few years ago, the Kermadec Trench was in the news after the Nereus, an unmanned research submarine, imploded because of the high pressure at a depth of 9,990 meters while conducting explorations at the Kermadec Trench.

Located in the western Pacific Ocean, the Izu-Ogasawara Trench has a maximum depth of 9.78km. Also known as Izu-Bonin Trench, this deep trench stretches from Japan to the northern section of the Mariana Trench and is also an extension of the Japan Trench. Apart from the Izu-Ogasawara Trench, the western Pacific Ocean houses the Izu Trench and the Bonin Trench.

Another deep submarine trench located east of the Japanese islands, the Japan trench (as shown in the image above), is part of the Pacific Ring of Fire in the northern Pacific Ocean. With a maximum depth of 9 km, the Japan trench stretches from the Kuril Islands to the Bonin Islands. It is also the extension of the Kuril-Kamchatka Trench and the Izu-Ogasawara Trench to the north and south, respectively.

The trench was formed due to the subduction of the oceanic Pacific plate beneath the continental Okhotsk Plate. And the tsunamis and earthquakes lead to the movement of the subduction zone with the Japan Trench.

Located between the Caribbean Sea and the Atlantic Ocean, the Puerto Rico trench marks the deepest point in this region and the eighth deepest point found on the Earth’s surface.

It lies at a depth of 8.64 km, is spotted at Milwaukee Deep, and measures a length of over 800 km; this trench has been responsible for many tragic tsunamis and earthquake activities in this region.

Efforts for a complete mapping of this trench have been undergoing for a long time. The French bathyscaphe Archimède first attempted to explore the seafloor in 1964, and a robotic vehicle was sent to the trench in 2012 to study its characteristics.

The deepest trench in the Atlantic Ocean after Puerto Rico Trench, South Sandwich Trench, is at a depth of about 8.42 km, described as Meteor Deep, and runs for over 956 km, making it one of the most noticeable trenches in the world.

The Peru–Chile Trench (the Atacama Trench) is located around 160 km off the coast of Peru and Chile in the eastern Pacific Ocean. The Atacama Trench has a maximum depth of 8.06 km below sea level. The deepest point of the trench is known as Richards Deep. 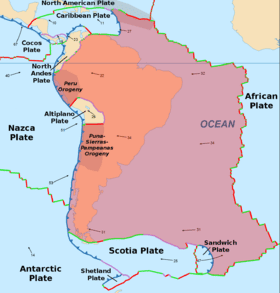 The trench measures around 5,900 km in length and 64 km in mean width, while it covers an area of about 590,000 square kilometers. The Atacama Trench was formed due to a convergent boundary between the subducting Nazca and the South American Plates.

Frequently Asked Questions about the deepest parts of the Oceans

1. What is the deepest and darkest part of the ocean?

Mariana Trench is the deepest part of the ocean, with a depth of 35,800 feet. It is one of the least explored places on the planet, deep enough to swallow Mount Everest.

2. Has anyone been to the bottom of the Mariana Trench?

Famous Businessman and Explorer Victor Vescovo reached 35,853 feet into the Pacific Ocean, breaking all records for the deepest dive.

3. What are the five deepest parts of oceans?

4. What is the 2nd deepest part of the ocean?

Tonga Trench is 35,702 feet deep and is the second deepest place on Earth in the south-western Pacific Ocean.

5. Does anything live at the bottom of the Mariana Trench?

6. What would happen to the human body if it were placed in the deepest parts of the ocean?

The human body would be crushed by the enormous pressure. The person would die in minutes.

Disclaimer: The author’s views expressed in this article do not necessarily reflect the views of Marine Insight. Data and charts, if used in the article, have been sourced from available information and have not been authenticated by any statutory authority. The author and Marine Insight do not claim it to be accurate nor accept any responsibility for the same. The views constitute only the opinions and do not constitute any guidelines or recommendations on any course of action to be followed by the reader.