There are lot of discussions going on for adopting the mass flow metering system known as the Coriolis flow meters (based on the Coriolis Principle – named after Gustave Coriolis, a French mathematician) in the bunkering industry to improve upon existing measurement technologies and to prevent fuel-pilferage.

Thousands of vessels stem bunkers around the world every day and every now and then we come across news about bunker theft either by the supply vessel (bunker tanker or barge) as described in ‘malpractices in bunkering operations’ or the receiving vessel under-declaring the transferred fuel. 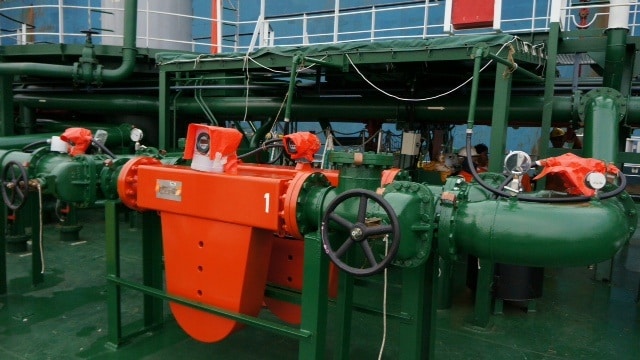 What is the Coriolis Principle?

The Coriolis flow meters work on a basic principle of Coriolis Effect or ‘Force’ – which is essentially a veering or deflection of a moving object when viewed from a rotating reference frame. In the Northern Hemisphere a moving object will appear to deflect to the right (facing the direction of motion) and vice versa in the Southern Hemisphere. Note that Coriolis force is actually not a force but since the objects tend to veer to the left or right of its path, it is assumed that a force has acted upon it to cause this deflection because of the Earth’s movement underneath it.

A good example of this would be to consider an airplane flying from Madrid to New York. Both places share almost the same latitude – so it would make sense for the pilot to set a course due West (2700). However because of the Coriolis Effect if constant course corrections are not applied the plane will probably end up somewhere in Canada (i.e. right to the intended path in the Northern  Hemisphere). Mass flow meters are based on this principle and a simplified explanation is as follows:

Imagine a jet of water e.g. from a pressure hose pointed straight ahead – the jet of water will move in a straight line but when viewed from a rotating reference the jet will appear to be veering to the right or left depending on the hemisphere. If the same jet of water was now enclosed in a measuring tube rotating around a fixed point with its axis perpendicular to the direction of flow of water; the measuring tube would appear to twist/deform due to the change in angular velocity from the Coriolis Effect. However, it’s not practical to make the tube rotate so instead, the tube is oscillated electromagnetically causing it to vibrate achieving the same effect as if the tube was rotating. This twisting/deformation of the tube results in a phase difference (time lag) which is registered by use of special sensors and thus form the basis of the mass flow measuring in the system.

The mass flow meters come in different varieties – such as straight tube type, twin tube type, bent tube type – with each having its own advantages and disadvantages; however, discussion on these types is beyond the scope of this article.

The question we all face today is whether the Coriolis meters could be an alternative solution to existing volumetric flow meters (also called positive displacement meters) and manual measurements (where a bunker surveyor would measure the quantity of fuel transferred using the ‘dip’ method and look-up tables).

The issues primarily faced today are:

1) Experience of the surveyor / ship crew to carry out accurate calculations – there are many factors that can contribute to errors like incorrect temperature, density etc. and these errors can be compounded quickly giving rise to large errors in the final quantity of mass delivered. In other words, the final results will only be as good as the surveyor who performed the calculations. Whereas the Coriolis mass flow meters measures the mass directly taking into account various temperature and pressure change automatically and thus eliminating any guess work and need for any look-up tables, trim corrections etc.

3) Gauge Glasses of Flow Measurement Systems Can be Tampered With: Existing flow measurement systems will have a separate temperature and pressure gauges where these could easily be tampered with or gauges not being accurate like non-aqueous liquid filled gauges with glycerine and silicone oils often seen with broken sight glass. The whole purpose of a liquid filled gauge is for the liquid to absorb vibrations, thus providing a dampening effect to enable accurate readings and also to reduce wear and tear by lubricating all moving parts – in other words this affects the integrity and reliability of the gauge readings over time. On the other hand, mass flow meters have another inherent advantage of measuring temperature, pressure, temperature and density simultaneously via built-in sensors and displayed on an LCD display.

4) Inability Of Volumetric Meters to Detect Entrained Air in the System: Amongst other things, one major flaw in volumetric meters is and will always remain – is its inability to detect entrained air in the system which may be introduced inadvertently like during tank stripping, changing tanks, leaking valves to an empty tank; turbulence during high loading rates or deliberately leaving a valve open to an empty tank or blowing compressed air into the system through the delivery hose. This malpractice is known as ‘cappuccino bunkers’.

The ‘cappuccino’ or aerated bunkers (often with froth and bubbles) when sounded will give the impression that the fuel is delivered as ordered. In fact after sometime when the entrapped air in suspension settles out of the fuel oil the fuel level drops and a short fall is discovered. In other words the existing flow meters in use today will only measure the volume of throughput and not the actual mass of fuel being delivered. As a result when air introduced into the system, which is essentially ‘small air bubbles’ – the flow meter will register it as volume and when this volume converted to mass (because fuel is always sold by weight but delivered by volume) will result in a substantial loss, especially in large bunker deliveries this could be considerable, with huge financial implications.

Whereas in the case of Coriolis mass meters manufacturers’ have been claiming that these are much better in handling the ‘cappuccino’ bunkers but not all Coriolis meters have the ability to deal with entrained air which can still pose a challenge. Manufacturers’ have various varieties of mass flow meters available today however, what is not clear is how these meters would cope with the presence of entrained air or two-phase flow (gas + fuel oil) because any flow meter’s (whether volumetric or mass) basic function is to measure what goes through it and if a mixture of air and fuel is present then how it’s going to differentiate the two?

Further, the entrained air is also likely to produce a lot of additional noise and since the Coriolis meters flow measurement is based on signal processing then this will tend to interfere with the readings and thus further reduce the accuracy of flow measurement.

In short, even if the manufacturers claim to have solved the entrained air problem; we believe this issue is here to stay. Because even though Coriolis mass flow meters will outperform any other volumetric meter type on the market, it would be extremely difficult for the manufacturers to claim 100% accuracy and reliability of the measurement in the presence of entrained air.

5) Traditional Methods of Surveying Can Give Less Quantity Tolerance Level: Lot of manufacturers’ of mass flow meters claim a quantity tolerance level of less than 0.5% and some stating tolerance levels to be as low as 0.1%. Considering a stem of 2000 tons of bunker; 0.5% would mean a loss of 10 tons (in a large fleet this can easily be compounded to a huge loss –10 t x $600 = $6000 per vessel) whereas comparing this to traditional method of surveying can give errors of less than 0.1% or better (this is from own experience) most of the time.

6) Vibrations Can Affect Coriolis Meters: Coriolis meters would also need to be compensated against external vibrations and be corrosion resistant. Because flow rates are measured by vibrating tubes; therefore the readings could be affected by external forces or vibrations transmitted through pipelines and also due to the operating environment where pitting, cracking, coating erosion is common place; corrosion resistant meters would need to be considered like stainless steel, titanium etc. Again some of the manufacturers’ claim to have solved this issue but will this hold up to the harsh marine environment and constant vibrations that is felt on a vessel during cargo operations etc.

In conclusion Coriolis meters will definitely reduce the amount of bunker quantity disputes as these meters are less prone to tampering and can be used as an anti-pilferage tool in deterring cappuccino bunkers and at the same time increase the transparency during a stem operation. The present method of manually gauging the tanks and calculations are of course not only more prone to error but also time consuming especially in an event of a dispute but when diligently carried out the quantity tolerance can be less than 0.1% most of the time.

As technology advances and mass flow meters are more perfected (quantity tolerance-wise) vessel operators and bunker suppliers will see tangible benefits in form of high level of transparency, efficiency and faster turnaround times for the vessel. Because everyone in this industry is well aware that in case of a major dispute a success of a claim will largely depend on the nature and the quality of evidence gathered at the time the supply is made. Without detailed contemporaneous written evidence, the party affected is likely to lose the claim or it could be many years before the dispute is settled!

To achieve global acceptability manufacturers’ may need to provide and install these meters at own cost on vessels and barges in order to conduct trials and document results. Some manufacturers’ are already engaged in trials with ship operators and suppliers but more needs to be done in order to win the confidence and trust of the end users.

Unless the use of mass flow meters is mandated disputes could still arise. For example, a vessel is fitted with a mass flow meter but the barge is not and in case of a short delivery (caused other than the cappuccino effect or other dubious practices); the barge could still stand ground that the full ordered quantity was delivered! What would you do in a situation like this? Therefore until such time, the use of mass flow meter should complement the existing method of manual surveying. Lastly, even though often the buyers (ship operators) may be tempted to buy bunkers from those offering the lowest price per ton; they should continue to use only the most trusted and reliable bunker suppliers.

Let’s know in comments below.

Bunker Detective is an exclusive division of AVA Marine Group Inc.  AVA Marine is a professional marine surveying and consultancy firm – founded and led by its principal marine surveyor Kaivan H. Chinoy. The Company provides a comprehensive range of specialist marine surveying, marine loss control & consultancy services primarily in Western Canada and the West Coast of the United States. To learn more about their marine surveying capabilities, visit the website at ava-marine.com / bunkerdetective.com

The article was first published at Bunker Detective and has been reproduced with the permission of the author.