A gas tanker was moored at a shipyard and crew and shipyard personnel were busy preparing for maintenance. The shipyard had issued permits to enter tanks which, in theory, meant the tanks were adequately ventilated and illuminated.

During a preliminary inspection it was found that a maintenance hatch cover had become dislodged from the deck in the lower tank dome and had fallen 17 metres to the bottom of a cargo tank, leaving the maintenance hatch open and unsecured.

Work inside the tank started the next day. One of the tasks was to recover the maintenance hatch cover. Instructions were issued to the crew to be extra vigilant on account of the unsecured open hatch in the lower dome; none of them had entered this tank before but the bosun and AB had previously entered similar tanks. 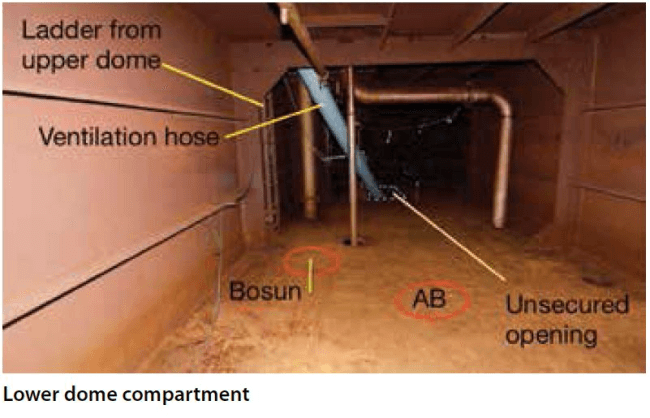 The bosun, the AB and an OS began by lowering equipment to recover the hatch cover into the lower tank dome. The AB then went into the lower tank dome. He was not sure where the maintenance hatch was located so he used his torch to get an overview. When he had located the hatch, he started to rig the recovery equipment about 3 metres from the opening.

The bosun followed close behind. He looked around to locate the opening in the deck then joined the AB. No lighting had yet been rigged up in the tanks but both men carried portable lights and felt comfortable that these would provide sufficient light for the time being. Both men were working on preparing the equipment, with their backs to the entrance ladder.

The OS followed a few minutes later carrying a hand-held torch. The bosun heard the OS as he started to climb down the ladder but after one or two minutes he realised the OS was not with them. He shone his light around the space to locate the OS but he was nowhere to be seen. The bosun then went over to the open hatch and looked into the tank. He then saw the OS lying immobile at the bottom of the tank 17 metres below.

Within 10 minutes the victim had been brought out on deck and first aid was administered. The victim was brought to a nearby hospital but he was subsequently declared dead.