In the early morning hours, a navy frigate was underway in darkness and good visibility at about 17 knots. Its navigation lights were on, but the AIS was in receive mode only and therefore was not transmitting own AIS information – as is sometimes the case with military vessels.

The bridge was manned with an OOW and another six crew including two lookouts and a helmsman. The OOW called the local VTS by mobile phone, informing them that the frigate would enter the VTS area from the north and giving its planned route through the VTS area. The VTS operator saw a radar echo on his overview screen, which was assumed to be the naval vessel. Because the frigate was not transmitting AIS signals, there was no information about the vessel’s identity, course and speed vectors.

The OOW’s attention was focused on three vessels that were approaching from ahead on the port side. He informed the bridge team of the three approaching vessels and asked them to notify him of any further observations. In addition, the bridge team could see a floodlit ‘object’ on the starboard side but they did not discuss it or examine it further on the radar or via AIS because they assumed it was an object on shore. 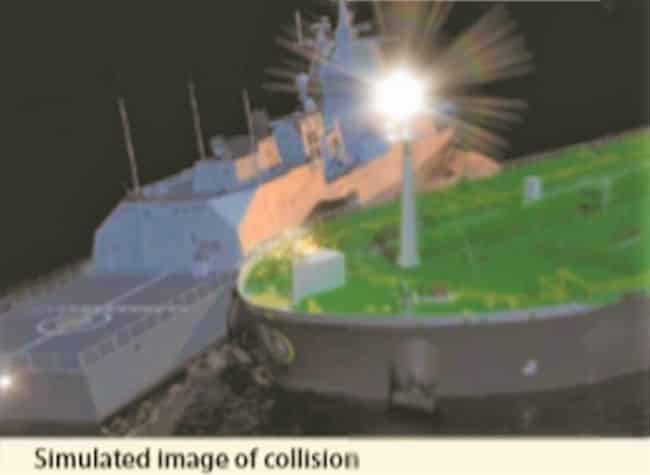 Meanwhile, a tanker was getting ready to depart a terminal some distance from the oncoming frigate. The bridge on the tanker was manned by the pilot, the Master, an OOW and a helmsman. The pilot called the VTS on the VHF to announce their imminent departure. The deck lights of the tanker were left on to ensure adequate visibility for the crew during departure and afterwards as they secured equipment in case of heavy weather. Soon, the tanker was moving away from the terminal.

The pilot called VTS to announce their departure and intentions. The pilot ordered a course of 350° with the tanker now at a SOG of about 3 knots. The pilot had seen two southbound vessels to the north, one of which was the frigate, and two northbound vessels to the south. About 12 minutes later the tanker’s speed had increased to about 6 knots. The frigate was by now about 1.5nm away and was approaching at an angle of 10–12° on the port bow. 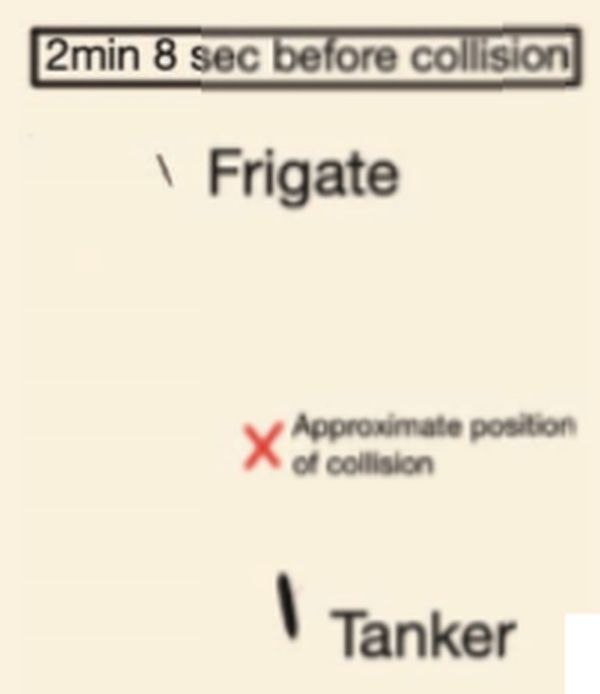 The pilot then asked the Master to use the Aldis lamp to signal the oncoming ship. Shortly after signalling with the Aldis lamp, the Master and the pilot observed both sidelights of the frigate so they assumed it was turning to starboard. Yet, shortly afterwards, they again saw only the green light, so they continued sending out light signals with the Aldis lamp. The pilot ordered a course change of 10° to starboard to indicate to the approaching vessel that they were making an evasive manoeuvre. At about the same time the OOW on the frigate ordered a course change to port of about 10 degrees, which was applied in small increments.

As the two vessels approached each other the VTS operator now remembered the frigate’s report some hours earlier and he immediately called the pilot on the tanker. By this time there was approximately 875 metres between the two vessels. The pilot broadcast over VHF: ‘Turn starboard if you are the one approaching.’ The OOW on the frigate understood the call to be from one of the three other northbound vessels that wanted the frigate to go further to starboard to increase the passing distance. The OOW still thought the ‘object’ on the starboard side was stationary and that they could not go further to starboard without getting too close to the ‘object’. Meanwhile, the tanker was still altering course to starboard and increasing speed, now at about 7 knots.

On the frigate, the team saw the lights on their starboard side were getting closer, but they believed that the OOW was in control of the situation. On the tanker, the Master, seeing that the situation was becoming critical ordered ‘stop engines’. The OOW on the frigate suddenly realised that the ‘object’ that was giving off light was moving and that they were on a direct collision course. Seconds later, the pilot on the tanker ordered full speed astern on the engines but the two vessels collided nonetheless. The tanker’s starboard anchor ploughed into the starboard side of the frigate causing extensive damage.