A small container vessel was secured in port. A couple of visitors had boarded and, in the early morning hours, they were now on their way off the vessel. The gangway had been raised a few meters above the dock surface, so the gangway watchman needed to lower it back down to the dockside to permit their exit.

As this was being done, the two visitors attempted to disembark by stepping over the bulwark, which was almost at the same height as the quay. 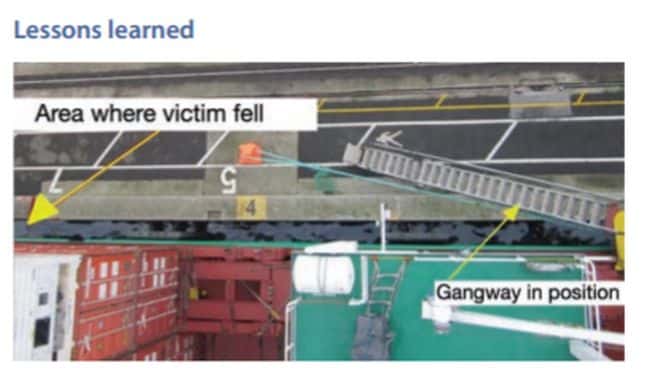 One of the persons fell into the water in the gap between the vessel’s side and the quay. Two life rings were quickly thrown into the water and a monkey ladder and lifelines were rigged on the vessel’s bulwark. The general alarm was sounded and the port emergency service was called for immediate assistance.

Shore assistance arrived in less than 20 minutes and the victim was recovered about 20 minutes after that. The victim was transferred to a shore hospital but his death by drowning was later confirmed.

The visitors were tempted to step ashore by the near equality of height between the berth and the bulwark. This false sense of security and overconfidence cost a life. Rigorous management and control of embarkation/disembarkation is of the utmost importance.