While underway on a general cargo vessel, the OOW was listening to music on a personal computer and, from time to time, he hummed or sang along with the music and chatted with the lookout. The visibility remained good and they could not see any ships or other traffic nearby. The S-band radar, AIS unit and both very high frequency (VHF) radios were switched on.

At about 2149, the sailboat’s AIS unit ‘target alarm’ sounded. Alerted, the skipper’s wife called the skipper to come inside the cabin and have a look at the AIS display. Together, they noted from the AIS data that the approaching ship was making good a course of 122 degrees (T) at 11.5 knots. The skipper then went back on deck to look for the ship. Within a minute, he saw its green sidelight fine on his starboard bow. The skipper decided to alter course to port to a heading of about 280 degrees, with the aim of passing well clear of the ship. 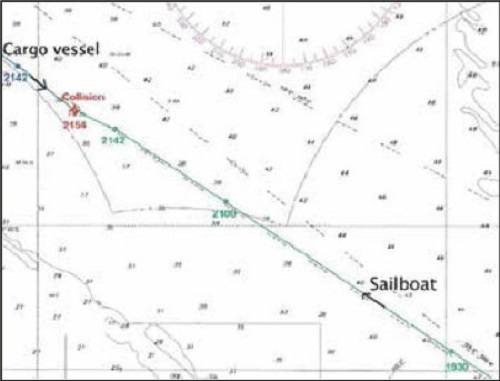 Just after 2153, the cargo vessel’s lookout reported that the green light he had been observing seemed very close. The sailboat was in fact now less than one mile ahead of the ship and the two vessels were closing at a combined speed of nearly 18 knots. In response to the lookout’s report, the OOW checked the radar and the AIS unit but saw no target in the direction of the green light. About two minutes later, the sailboat called the vessel on VHF channel 16 and identified themselves. The yacht was now about 200 m from the ship’s bow.

Alerted by the unexpected radio call to his ship, the OOW stopped humming. A few seconds later, he broadcast on VHF channel 16 that the ship’s course was being altered to starboard. He then ordered the lookout to engage hand steering. He could no longer see the yacht’s green light when he ordered the rudder hard-to-starboard. At 2156, with the vessel’s heading at about 130º, it collided with the sailboat, the yacht scraping along the ship’s starboard side.

When the Master came to the bridge after the collision, one of his first actions was to adjust the radar gain and clutter controls. The yacht (as a target) was then easily identified on the radar display. Had the OOW correctly adjusted the controls on the ship’s radar, he may have determined that the green light the lookout had identified was a vessel. As a result, he would have been in a better position to make a full appraisal of the situation, the risk of collision and to take early and appropriate action.

While the cargo vessel’s lookout sighted the sailboat’s starboard sidelight, the OOW was not keeping a proper lookout. He made a series of assumptions based on limited information instead of following a systematic approach to confirm what had been observed. As a result, he did not conclude early enough that the lookout had identified a sailboat and that the yacht posed a risk of collision

Had the OOW correctly adjusted the controls on the ship’s radar he would have been in a better position to make a full appraisal of the risk of collision allowing for early and appropriate action. It is possible that the OOW was distracted from his primary task, the safe navigation of the ship, by his conversations with the lookout and the music that he was engaging with through his constant humming and singing.

The sailboat’s watchkeeper was not keeping a proper lookout. He did not visually identify the cargo vessel’s navigation lights in time to make an effective appraisal of the situation, did not set the yacht’s AIS unit on a range scale that provided adequate warning of approaching vessels and, when alerted by the AIS of the approaching ship, misinterpreted that information.

Pope Francis Extends Financial Aid To Families Of Crew Members Of Capsized Gulf Livestock 1
We use cookies to ensure that we give you the best experience on our website. If you continue to use this site we will assume that you are happy with it.OkRead more