You are here: Home › Marine Careers › What Is Marine Engineering: Courses, Job Description & Salary
TwitterFacebookLinkedInPinterestBuffer
For information on how to join merchant navy read –
The Ultimate Guide To Join Merchant Navy

About a century ago no one would have heard about a marine engineer, but today it is a profession which is as established as any other famous ones.

Over the last 100 years, engineering as a field of study has developed and diversified far beyond what could have been imagined prior to this period.

Not only that but it has also branched out into various specialised fields that have achieved great progress.

Most of these new fields are aligned to any of the basic engineering branches such as mechanical, electrical, civil, electronics, computers etc and have something or the other incorporated from them. One such branch is that of marine engineering.

Marine engineering is the field of study that deals with the design, development, production and maintenance of the equipment used at sea and onboard sea vessels like boats, ships etc.

Read how to become a marine engineer here.

A marine engineer is a professional who has studied marine engineering (sometimes also called maritime engineering) and is responsible for the operation, maintenance and repair of all major mechanical and engineered equipment onboard a ship.

There are several mechanical systems that help in the operations of any vessel like the propulsion mechanics, electricity and power generation system, lubrication, fuel systems, water distillation, lighting and air conditioning system etc.

These are all included in the technical responsibilities of a marine engineer.

Some of the important duties that people who have done marine engineering (maritime engineering) perform are:

Monitoring and maintenance of mechanical systems – Engineers of each rank on board ship is allocated specific machinery and systems for maintenance and monitoring purpose.

Machinery systems are divided among all engineers and it is the duty of each engineer to ensure his/her machinery is running at all times. Marine engineers are also required to look after the machinery on deck.

Fuel oil bunkering – Marine engineers also handle the transfer of fuel oil to the ship from a bunker station or barge. It is usually the duty of the 4th engineer, who also takes regular soundings of the fuel oil tanks and report it to the chief engineer for planning bunkering operations.

Apart from the above-mentioned duties, a marine engineer on ships is required to follow all the instructions of the chief engineer, the head of the engine room department on the ship.

In the latter half of the 19th century, marine engines for propulsion arrived and revolutionised the sea travelling vessels. It was about this time that the marine engineer began to stamp his importance over the scheme of work and transformed from a ‘stoker’ to an engineer.

In recent years, there have been many new introductions to the marine technologies that have further enhanced the machines and the services like the fuel cells and magneto hydrodynamics etc.

Further research and development are also in progress and newer details emerge every now and then. It would thus be safe to state that marine engineering is a very dynamic field.

A marine engineer can opt for different types of vessels, depending upon his/her background training and expertise, which can be categorised to :

In recent times, this field of study has caught on the imagination of many around the world. The interest was shown by students of various countries and the response at the concerned departments in the universities bears testimony to this.

The increase in the employment opportunities in this field has added to the lure of a job as a marine engineer. Both merchant navy and armed navy have immense opportunities for the students of this field.

In addition to this, various manufacturing industries and units that produce shipping equipment and machines also hire these professionals to work in their production houses.

In some countries, a marine engineer can switch over to armed navy (after giving physical and medical fitness exams) as the technical qualification requirement are already achieved by a seagoing engineer.

Also, budding field jobs as trainers and teachers at various institutions are available and suitable candidates are very much in demand. Judging by the developments and the interest it would not be wrong to assume that this field of study would continue to leave an indelible mark on the world.

A marine engineer’s job on a ship is challenging as the engine room is a complex mechanical system with a hostile environment. Engineers mainly work in four-hour shifts and have to do additional hours of maintenance work.

However, during the time of emergency, the work hours can stretch for hours without any major breaks until the machinery/system is brought back to normal working condition and there is no threat to the ship of any kind.

When on a port, a marine engineer can go onshore, if time permits and after taking permission of the chief engineer and Captain.

With the advancement of technology, the amount of time a ship stays at the port has drastically reduced, leaving the ship’s crew with no time to go out on shore-leave.

Marine engineers just like any other ship’s crew work on a contract basis. Shipping companies usually offer four to six months of a working contract, depending on the experience and rank of the marine engineer.

After doing a four-year marine engineering degree course, a candidate becomes eligible to work on ships (after pursuing required supplementary courses). A fresh marine engineering graduate will join a ship as a trainee or junior engineer for six months working contract.

After completion of the training and the necessary sea-time, a fifth engineer is eligible to appear for class IV exams, clearing which, he or she will be able to join as a 4th engineer.

After gaining a good amount of experience and on the basis of performance, a company will provide a promotion to the third engineer. On completion of required sea time as a third engineer, one can give Class II exams to become a second engineer.

Similarly, on completion of necessary sea time and gaining a good amount of experience, a second engineer can give Class I exam to get promotion as chief engineer.

Do note that the promotion will solely depend on the company’s decision even if the marine engineer has the experience and certificate.

The process might also differ in the country and company one belongs to. 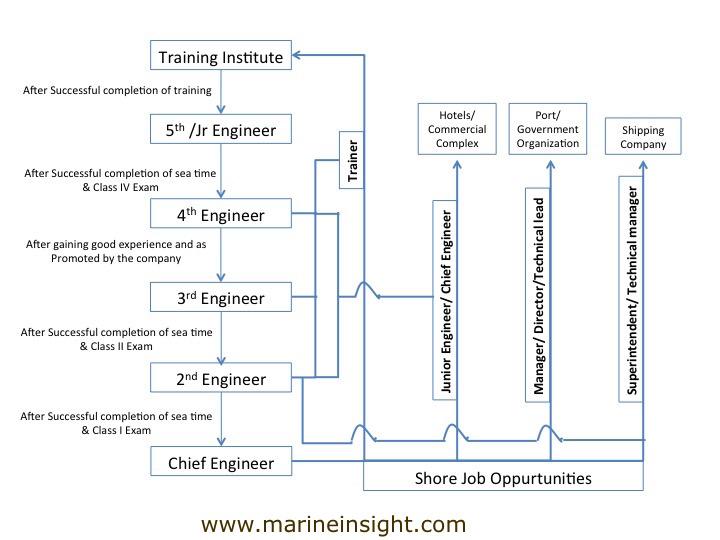 The above graph is a brief overview of hierarchy and job opportunities for Marine engineering candidates. The Shore Job entirely depends on the capability/ experience of the candidate and requirement of the shore company.

After marine engineering, a candidate has to do various advanced courses and management studies to opt for a shore job even having sailed as a chief engineer.

These books have been used for several years now by both maritime students and experienced professionals.

Some of the famous marine engineering books are:

A salary of marine engineer mainly depends on the type of ship he/she is working on, the shipping company, and the level of experience.

The salary structure can also vary based on one’s nationality and the country one belongs to.

For. e.g. marine engineers from India have salaries in the range mentioned below ( in USD$/month):

Please do note that this is just a rough estimated range and vary according to the factors mentioned earlier.