Ship accident videos usually involve collision, grounding, or capsizing of ships. However, when an accident involving a floating vessel results into a huge explosion of fire and smoke, it’s an extremely scary scene to visualize.

Explosion on ships or any other floating vessels is one such major threat that can not only hamper the operational processes of vessels but also threaten the lives of crew personnel. Most of such explosions are inadvertent in nature and occur quite suddenly, without any precedence whatsoever. 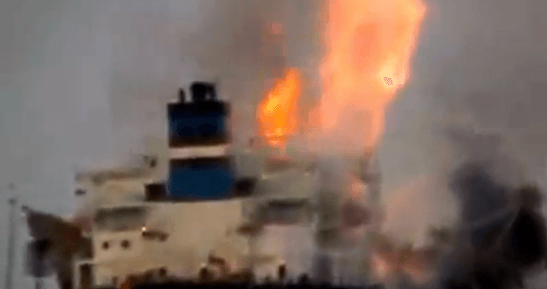 However there are quite a few such major explosions that have been the subject of some brave video capturing. Mentioned herein are 6 shocking ship explosions that were caught on tape.

Disclaimer : The videos used in this article contains flashy images, loud noise, and coarse language which might be unsuitable for some viewers.

1. Bouchard 125: The oil flatboat (barge) imploded at Staten Island (U.S), the fuel transferring depot of Port Mobile, over a decade ago in 2003. The video captured shows the flatboat in raging flames and dark clouds of fumes rising in the horizon. The imploding of the Bouchard 125 was a ghastly incident that led to the death of two personnel of the flatboat and caused immense problems for the company with respect to the vessel’s operational safety and viability.

2. Bunga Alpinia: The tanker vessel Bunga Alpinia owned and operated by MISC (Malaysian International Shipping Corporation) imploded in 2002 while berthed at the port of Labuan. The imploding caused the death of one crewing personnel aboard the tanker vessel. Though efforts to curtail the spread of the fire were quite prompt, it was with immense difficulties that the fire was brought under control.

3. M/T Prem Divya: The morning sun at the Dubai port of Fujirah saw greyish plumes of smoke arising from the vessel Prem Divya, in January 2012. According to the reports, a spark from on board welding work caused the vessel to implode with fire and blasts, killing three members and injuring a few.

4. Fuel Flatboat Explosion – Alabama: This video captured in the darkness shows the blazing of a couple of fuel containing flatboats in the River Mobile in the state of Alabama in April 2013.The accident didn’t cause any fatalities though the US Coast Guard was prompt to carry out evacuation operation in a bid to prevent any casualties of life. The blaze of fire suddenly intensifies to explode massively, leaving a scary scene in its wake.

5. Lagos Fuel Terminus – Tanker Barge Explosion: The city of Lagos watched as the skies darkened with heavy smoke fumes from an explosion of a fuel terminus. The incident took place during fuel transfer procedure. The fire on one of the tanker barges started slowly and then expanded into chaos, exploding more than once. According to some reports, the fire started in a fuelling station and there were no casualties to life or other vessels in the vicinity. However, some people were wounded in the accident.

6. Fuel Tanker TPAO: The explosion aboard TPAO, Turkey’s biggest oil tanker ship in the year 1997 was one of the most horrifying accidents ever. The spreading fire engulfed a few other vessels in the vicinity and caused fatalities to not just the crew members and maintenance work-men but also the rescuing fire-fighters as well. The event became a much reported incident with the Turkish and international media presenting live feed of the rescue operations to control the spread of the fire.

Note: All efforts have been taken to ensure the accuracy of details mentioned in this article. If you feel something needs to be added or removed, let us know in the comments below.