You are here: Home › Types of Ships › What is Karadeniz Powership?
TwitterFacebookLinkedInPinterestBuffer

A Powership is an exceptional marine vessel – a floating power house resource, with an electrical generating station installed on it. In 2009, the Karadeniz Powership – an auxiliary branch of the Turkey based Karadeniz Energy Group, took the initiative of designing and developing its own “Power ships” to accomplish the mission of establishing the world’s first Powership fleet.

To begin with, 4 bulk-carrier converted Powerships, namely – Doğan Bey, Rauf Bey, Kaya Bey and Ali Can Bey were all set sail as a part of the global expansion strategy that worth more than billions of dollars. In 2010 – 2011, these ships commenced their duties in Iraq and Pakistan to have the population meet the power needs there. A fifth ship, Irem Sultan joined the pack in 2012, followed by Fatmagül Sultan in 2013.

What are the benefits of Power Ships?

The proposed, designed and developed Karadeniz Powerships are expected to fulfill the urgent electricity requirements across the countries of the Middle East, Asia and Africa. The current fleet has the capacity of producing more than 750 MW of electricity and with the additional ships scheduled for completion soon; the total fleet capacity is anticipated to surpass 2,000 MW. The operation area of these power ships will be mapped across 15 countries, mostly in the Middle East and South Asia and in North Africa as well.
Powerships are no ordinary vessels but are built using special technology. They can be operated both on liquid fuels (HFO/RFO) and natural gas with an option of duel fuel. Even at various high voltage levels, these Powerships can provide uninterrupted electricity as per the requirements of the involving countries.

Also see: How is power generated and supplied on ships? and What is cold ironing?

Karadeniz Powerships are delivered to the client countries as a fully operational floating power plant, following a rental contract or a Power Purchase Agreement (PPA). Their capacities vary from 45-500 MW and the delivery time takes around 60-180 days to supply medium-term solutions through contracts of 2-5 years. Karadeniz Energy Group will be in full charge of their powerships’ operation and maintenance during the contract period.

Following the shutting down of numerous nuclear reactors with forged or un-certified parts, all over the world, the Karadeniz powerships can become the most eligible successor to tackle power shortages.

The first Powership of the Powership fleet, the Karadeniz Powership Doğan Bey was built in Istanbul, Turkey. It has been providing electricity in the South-East region of Iraq since May 1st, 2010, with a capacity of 144 MW. 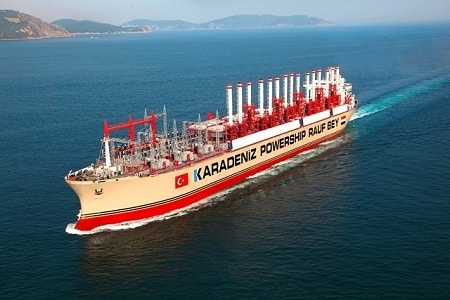 Constructed in Turkey’s Tuzla Shipyard, the 2nd member of the fleet and also the 2nd largest Powership of the world with a capacity of 200 MW, the Karadeniz Powership Rauf Bey has been supplying electricity to fight the power outages in the Gulf region since May 2010. 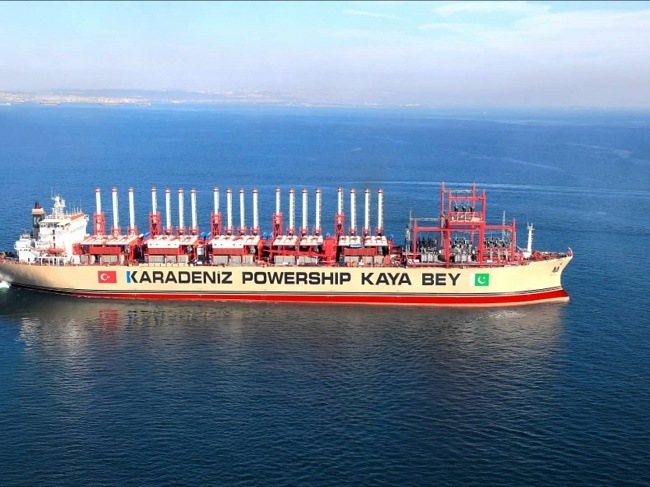 Turkey-built third Karadeniz Powership of the fleet and the world’s largest with a massive capacity of 220 MW, Kaya Bey was expected to alleviate the energy crisis in Karachi, Pakistan, coordinating with the Korangi Thermal Power Station from early 2011. But it has raised much controversy since its failure to produce the contractual amount of power and electricity. 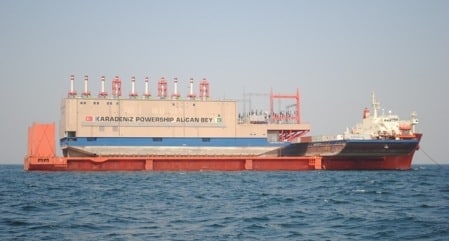 The fifth member of the Powership fleet, the Karadeniz Powership Irem Sultan was built in Turkey and has been supplying electricity since 2012, with the capacity of 110 MW. It is also the first Powership to have a dual fuel option that allows it to be operated both on Natural Gas, and HFO (Heavy Fuel Oil).

Another Turkey-built Powership, with a dimension of 142 m x 42 m, Fatmagül Sultan operates both on HFO and Natural Gas, powered by nine MAN 18 V 51/60 DF medium speed engines and steam turbine and is expected to produce 205 MW of electricity. The power ship is currently moored in a Lebanese port, facing towards the Zouk Power Plant.

Built on the same technology as of Fatmagül Sultan, the Karadeniz Powership Ayşegül Sultan is 135 m long and 42 m wide and boasts a capacity of 175 MW.

Slated for a 2013 launch, the Karadeniz Powership Nuray Sultan equals to Zeynep Sultan technology and capacity wise. The DOLPHIN class Powership has a dimension of 100 m x 31 m and runs on dual fuel.

Another Karadeniz Powership Orhan Bey is scheduled for completion by 2013 which will be producing 175 MWs of power. The 135 m long and 42 m wide ORCA Class power ship will also have duel fuel technology with nine medium speed engines MAN 18 V 51/60 DF and steam turbine.

The project with Power ships fleet was codenamed as ‘Power of Friendship’ to be directed beneficially by the Karadeniz Energy Group as a friendly offering for the Middle East, Asian, and African countries suffering from electricity deficiency. An estimated count of six billion kilowatt hours (and more) of electric power has been recorded by the famous joint project funded by the Turkey based Karadeniz Energy Group and the Ministry of Electricity of Iraq. The ‘Power of Friendship’ project has been a huge success in the Republic of Iraq and the active power plant of Silopi, in South-east Turkey, played a significant role in it.

The Powerships – Doğan Bey, Rauf Bey and Irem Sultan are active participants of the company’s Powership fleet and are cooperating to be able to provide around four million citizens in Iraq with rich and continuous supply of electric power and energy. Needless to state, the ‘Power of Friendship’ project has traversed new frontiers and touched new heights in promoting peace and contentment by fulfilling the fundamental requirements of the people in Iraq.

Very few projects such as this one has managed to acquire such appreciation and popularity in the international arena. The ‘Power of Friendship’ has maintained strict standards of avoiding environmental pollution, promoted dual fuel technology and made the company immensely proud of its work culture.

The third power ship, the Karadeniz Powership Irem Sultan joined the Basra project towards the end of the year of 2011 with a generous contribution of 110 MW worth of electricity production. In fact the active collaboration of the three Powerships has led to an incredible total of 450 MW and even more. The installed electric capacity in the Basra region is also connected to three locations with the help of substations that run on high voltage.

Even unfavorable and rough weather like sudden sand storms, sweltering heat or could not disrupt the continuous generation of electric power and has functioned as a base load production. This has been of great significance to the Basra region and has displayed commendable work ethics. It has also aided the national grid of electricity with its uninterrupted donations of electric power. This project is of huge importance to the reputation of the company as Basra serves as the gateway of Iraq and connects it with the world. Thus, energizing Basra and providing it with electricity has been useful to the Iraq government, for the overall progress of the nation.
Powerships Pakistan

Two ships from the Powership fleet, namely the Kaya Bey and the Ali Can Bey had been employed to generate a huge amount of electric energy to provide for the five million Pakistani citizens, every single year. The Karadeniz Powership Kaya Bey is declared to be the biggest Powership in the whole world and is endowed with excellent machinery and energy sustenance. In a joint collaboration with the Karadeniz Powership Ali Can Bey, the production of electricity was expected to rise up to an incredible count of around 330 MW and it was much more of energy generated by any power plant, based on the land.

These two Karadeniz Powerships acting in Pakistan are considered to be the biggest investment by Turkey and they display fine examples of topnotch engineering. The Karadeniz Powerships in Pakistan, were positioned almost 300 meters from the main shore and were placed adjacent to each other. Thus, they were completely cut off from the land and acted as one mighty, independent power island. The Powerships were connected to the land using only high voltage lines for transmission and they had the required fuel delivered to them by few special tankers.

However, the early anticipation by the Karadeniz Energy Group and the Pakistan Federal Ministry for Water and Power has grown into violation of contract as the two Powerships have arguably failed to meet the target capacity of electricity production, since their operational commencement in 2011. The breach of terms has led to the end of contract and seizure of Kaya Bey and Ali Can Bey. If a settlement deal does not work out with the National Accountability Bureau, the Karadeniz Group would be suing Pakistan at a US arbitration court, to compensate for their loss and the release of the two Powerships, which now reside in the government’s custody.

What are Pipe Laying Ships?

What is a Dynamic Positioning Ship?
Want to share your tips and advice? Got questions? Visit the community forum to ask questions, get answers, meet people, and share your tips!