Vibrations are an integral part of every mechanically moving component or machine on board ship. Vibrations in marine engines are a result of periodic or random oscillations caused about an equilibrium point.

When these same vibrations occur in machines with bigger size, operating under heavy loads (2-stroke marine propulsion engine) the intensity of vibration levels would magnify because of large mass rotation and combustible gases forces inside the machinery.

If the vibration levels increase beyond the minimal level i.e. when mechanical system has one or more frequency, it may lead to deformation or breakage of engine components. It is therefore important to damp the vibration by some external arrangement.

In a 2 stroke marine propulsion engine there are basically 3 types of vibrations that act on the engine when it is in operating condition:

Axial vibration is a kind of longitudinal shafting vibration which occurs in the crankshaft because of the radial as well as tangential forces. 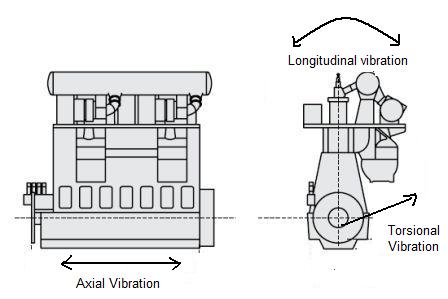 All the above vibrations may cause wear down of internal components, loosening of holding bolts, damage to the engine structure, and even failure of the crankshaft.

For counter acting on the longitudinal vibration of the ship, engine bracings is used. One end of the bracing is attached to the top part of the engine and the other to the ship’s structure.  This stiff connection dampens and transmits the engine’s rocking vibration to the ship’s hull. 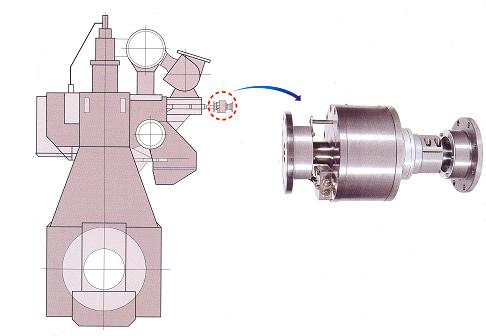 These are crankshaft generated vibrations, and hence to counter act them, dampers are fitted in the crankshaft. This arrangement dampens harmful and excess vibration. To understand the complete working of Axial and Torsional Damper, click here.