On a cargo vessel, a fire occurred in the mast house where oxygen and acetylene cylinders were stored. The crew had arranged two gas torches in tandem for carrying out hot work on the windlass drum.

Both the torches were connected in parallel from the same pair of gas cylinders by temporarily fitting “standard” t-joints at the regulator valves.

At some time during the hot work, it was decided to use one gas torch to carry out brazing repair work on the other torch while it was connected to the pressurized gas hoses.

Flashback from the torch being heated travelled through the hoses up to the mast house, rupturing the hoses at the regulator valve connections and causing a fire inside.

Fortunately, the backfire arrestors on the regulators prevented a major explosion of the cylinders.

Such hazardous accidents can take place on any kind of ship if proper precautions are not taken while handling gas welding/cutting onboard ships.

Compressed gas cylinders are used in the ship’s engine room and deck for a variety of repair and manufacturing operations. The two most used types of gas cylinders for this purpose are oxygen and acetylene.

When performing gas welding or cutting operation, the following practical tips must be considered for the safety and efficiency of operations and to avoid accidents while carrying out deck operations :

Compressed gas cylinders must be handled with utmost care and always be secured in a vertical position even if they are full or empty. Full and empty cylinders to be segregated and marked clearly.

Never store oxygen and acetylene cylinders together in one space whenever possible. Keep them separately in well-ventilated spaces. Ensure when not in use, their caps should always be on them.

3. Keep Grease and Oil Away

Control valves and fittings should be kept free of oil and grease. Never operate cylinder valves and parts with oily and greasy hands. 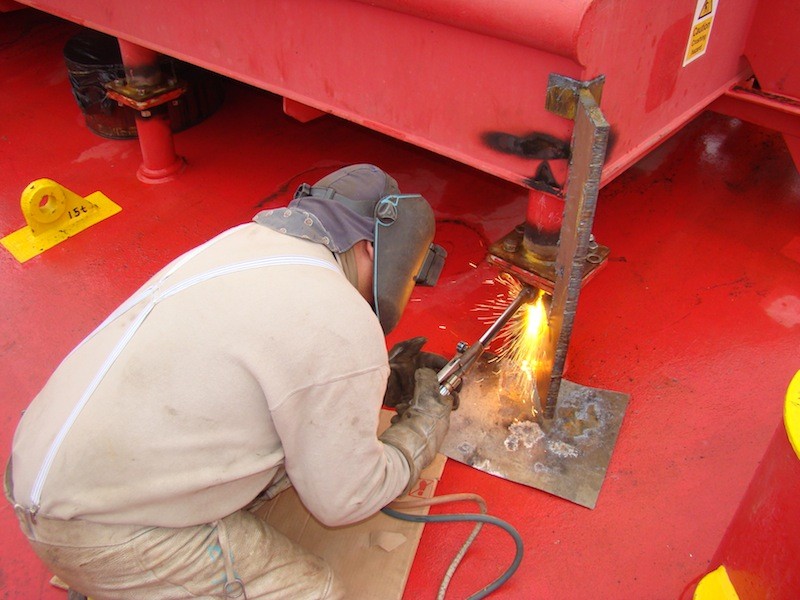 When performing gas welding, ensure the pressure of oxygen is always higher than the acetylene to avoid acetylene going back to the oxygen line.

Acetylene should not be used for welding at a pressure exceeding 1 bar of atmosphere gauge as it is liable to explode, even in the absence of air, when under excessive pressure.

7. Rectify Cause of Backfire

In the case of a backfire, the first priority should be to close the oxygen valve and then immediately close the acetylene valve. No operation is to be performed until the cause of the backfire is rectified.

In case of flashback or explosion of the gas pipes, the first action must be to isolate the cylinder valves for both cylinders. Further action is to be taken as per the ship’s fire drill procedures.

The connections between the hose and blowpipe, and between hoses should be securely fixed with fittings to comply with Regulatory Standard.

A regular watch is to be kept on the temperature of the acetylene cylinder. If the temperature is elevating, it is to be considered the same as a flashback or explosion situation for taking action.

Manifold hose connections including inlet and outlet connections should be such that the hose cannot be interchanged between fuel gases and oxygen manifolds and headers.

Any hose in which a flashback has occurred must be replaced with a new one.

While performing the job, the hoses should be laid properly and kept out of any moving machinery, sharp corners, high-temperature areas etc. Ensure they are not dangled, knitted or tipped over.

14. Use Only Approved leak detection fluid

Only approved leak detection fluid to be used for detection of a leak from hose or regulator arrangement. If it is not available, non-detergent soap (Ivory) can be used.

Never use sealing tape of metal joining material to prevent leak between metal to metal gas-tight joints. With an oxygen cylinder, this could result in the initiation of a metal-oxygen fire.

Never try to over tighten any nut of regulator connection or cylinder valve spindle to stop the leak. This can lead to damage.

Only special tools should be used to clean any clogging in the blowpipe. Before performing any maintenance, complete the system to be isolated. Never attempt repairs on pressurized oxy-acetylene equipment nor carry out any unauthorized modification on hot work equipment.

18. Use Safe Ignitors Only

Blowpipe should only be ignited with friction ignitor or other stable flame generators. Avoid using lighter as sudden flame, else blowpipe can hit the lighter body and explode

Oxygen should never be used for ventilation, cooling purpose or for blowing the dust off the surface of clothes.

20. Discard Hoses That Had Flashback

Any length of hose in which a flashback has occurred should be discarded immediately.

Last but not the least, make sure before carrying out any kind of hot work, the hot work checklist and risk assessment forms have been duly filled. Also, do not forget to follow all safety procedures while carrying out such jobs in enclosed spaces.

High pressurized gas cylinders carrying highly flammable material are a major threat to the ship and its crew. Special care and attention must therefore be taken while handling such equipment, taking into consideration all safety procedures and manufacturers’ notes.

Do you know any other important points that must be added to this list? Let’s know in the comments below.