You are here: Home › Marine Technology › A Guide To Lube Oil Purifier
TwitterFacebookLinkedInPinterestBuffer

A ship has hundreds of machinery and systems which helps in its day to day operations.

The main engine lube oil system on ships ensure lubrication of the main bearings through pumping of lube oil by duplex oil filters, to the crossheads, and guides, piston cooling and bottom end bearings through the swivel jointed pipes in the engine casings.

The engine cylinders have their own lube oil system, which lubricates the surfaces between the cylinder wall and the piston rings through a set of concentric nozzles or quills fitted around the cylinder liner.

There are various properties of lubricating oils to be maintained, such as viscosity, volatility, alkalinity, oiliness, detergents.

It is imperative to maintain the lubricating oil’s properties and to ensure it is in good condition.

This is executed by the watchkeeping engineer who is responsible for carrying out proficient engine room watch especially, on lube-oil temperature, pressure and the condition of oil.

The common contamination of the lube oil can occur because of:

As impure lube oil leads to:

Therefore, we need Lube oil purifier on ships for proper purification of lube oil with minimum throughput or batch purification in case of heavy contamination. 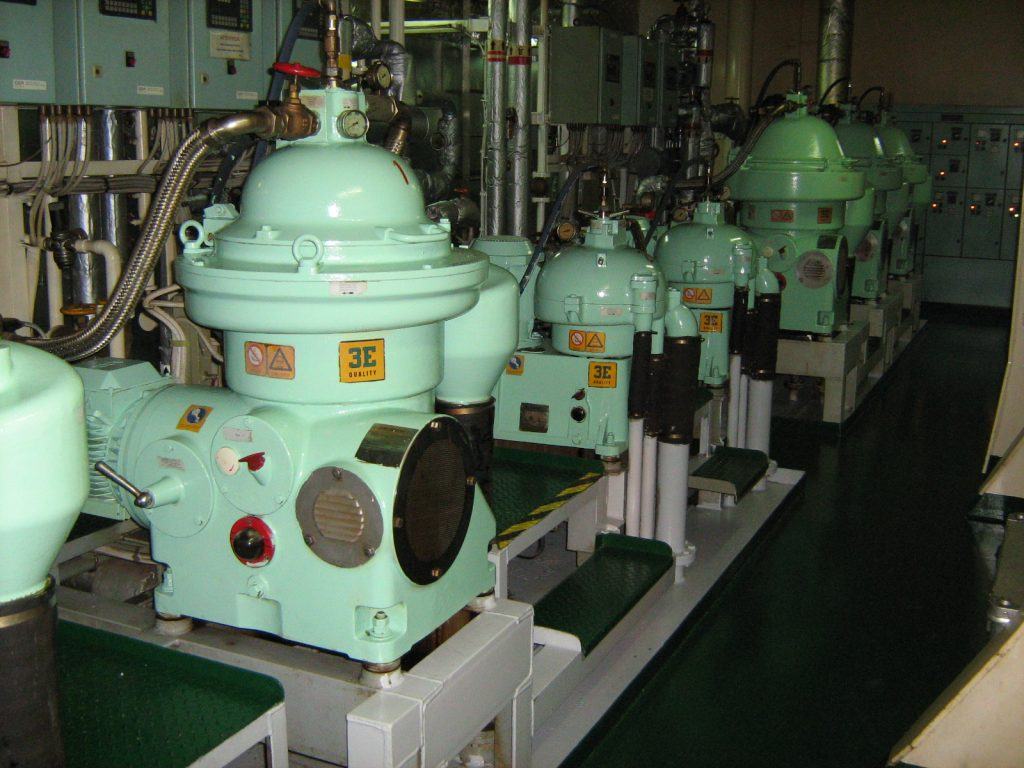 There are three ways in which lube oil purification can be done:

A high-speed centrifugal purifier is installed on a ship to get rid of the unwanted contaminants and pollutants from the lube oil.

On ships, separate marine purifiers are used for fuel and lube oil. Lube oil is purified only through centrifugation while the fuel oil uses both centrifugation and gravity separation.

On ships, it is also referred to as Centrifuge. It is a purifier that separates two liquid substances based on their difference in density with the use of gravity disc to separate solid and water and sealing water as an operator with two-holed lower discs; one for water and other for oil.

Electric Motor: This is responsible for driving various components such as bowl, tachometer, gear-pump via pinion gear, and rotating counter.

Friction Clutch: Friction clutch is installed on the horizontal shaft to safeguard and protect the electric motor from damage as the complete purifier assembly is too heavy for a motor to take the full load from the start without overheating. Once the system attends a preset required momentum, the pads gradually move out under centrifugal force connecting the motor directly to the bowl. It is necessary for the friction clutch to engage with the drum for the revolution of the bowl.
It safeguards against heavy starting current. A solid coupling, then due to a large starting current, would simply overheat and burn the motor winding. Therefore, friction coupling allows for some time, and after the motor reaches a certain RPM, the coupling gets engaged thereon.

The Bowl & Disc Stack: The Bowl is a solid assembly made up of high tensile steel working within purifier frame with ample space to accumulate and discharge sludge. Disc Stacks are incorporated with small holes to form the interface line and carry out separation using centrifugal force that causes oil to move inward and water and solid particle to move outward.

Rotating Shaft and Automation: Electric motor through bevel gear drives the bowl to produce high-speed centrifugal action. The vertical shaft rotates the bowl at high speed while the spur gear connects it with a horizontal shaft which is also driven by the motor through a clutch plate or friction plate.

The Centrifugal purifier is installed with full automation circuit involving three-way valves, detectors, monitors, transducers, solenoid valves, pneumatic valves etc, and a control panel, which ensures the centrifuge fulfils all the criteria required for operation in an automated unmanned condition.

Gravity Disc and Pairing Disc: This is fitted on the top of the disc stack to create an oil-water interface based on the difference in their density. While the pairing disc is the stationary impeller mounted in a chamber at the bowl’s neck to convert rotational energy of the liquid into pressure head.

The gravity disc whose size depends on separation temperature, the density of oil at the temperature and desired throughput of oil and by using of nomogram from the purifier manual; is responsible for setting the location of oil and water interface line variable as per maker’s design and the machinery need.

The Centrifuge, one of the most important auxiliary equipment on the ship, works on the basic principle of separation based on the difference in the specific gravity of two different liquids.

Gravity separation is the traditional method which is used, but it takes a while as gravity is the sole thing responsible for settling out. In the Centrifuge, the gravitational force is increased by using centrifugal force (almost 5000 times stronger) which significantly increases the separation power. In purification, based on centrifugation, clean oil is directed back into the process while water contamination is continuously discharged. Particles are contained in the separator bowl for later disposal or discharged automatically as per the programmed/installed operations.

Parameters to be kept in mind during purification:

Feed inlet oil temperature: The contaminated/impure lube oil is passed through the heater. An increase in temperature thereby lowers the viscosity, which ensures better purification.

Density of oil: Lower the density, better is the purification.

Back pressure: As the backpressure varies with the properties of oil such as density, temperature, the viscosity of the feed inlet; it needs to be adjusted for it ensures that the oil paring disc is absorbed in the clean oil on the way of pumping to the clean oil tank.

Throughput of oil feed: Minimum throughput – the quantity of oil pumped into the purifier per hour- optimizes the operation.

Prechecks before starting the Purifier (operation):

Before starting the Centrifuge:

The process is carried out as follows:

The impure or the contaminated lube oil is supplied to the centre from the settling tank and then with the help of centrifugal force aided with gravitational force, the separation between oil and water takes the place of their specific density.

As water is heavier, it is thrown out toward the side of the bowl whereas the oil being lighter is positioned at the centre.
Water is applied first for the oil will come out from the waterside if the impure or contaminated lube oil is directly supplied to the centrifuge. Hence, after the water is supplied; it is checked that it is coming out from the waterside and then gradually, the seal water brought to an end.

The seal water is not applied quickly as it may come to the oil side. Therefore, an interface line, also known as E-line formed between oil and water achieved by the gravity disk at the outlet, which is very crucial for correct operation.

A number of gravity discs, also known as regulating disc are provided with the purifier whose diameter is changed as per the specific properties of the lube oil.

The sludge can be discharged at time intervals or continuously depending upon the automation and operations of the installed system. Dedicated discharge detectors monitor the sludge side and provide a signal upon detection of any abnormality.

Water washing is used to remove contaminants such as acids, salts from the lube oil. Water is injected into the oil before purifying at a rate somewhere between 3-5% of the flow that continuously renews the water seal in the centrifuge. The temperature of the water is maintained 5 degree Celsius higher than the oil, while the oil’s temperature is about 75 degree Celsius.

Steam Jetting is a technique in which steam is blown into the engine lube oil which pairs to the purification by removing carbon more effectively through coagulation of colloidal carbon.

Reason Centrifugation is preferred over other methods:

Auxiliary maintenance is of predominant importance for smooth and accurate functionality of the ship. Some shipowners employ a fundamental preventative maintenance policy, while others operate more sophisticated systems based on condition monitoring.

The maintenance of Lube oil Purifier entirely depends upon the monitoring and lube oil sampling.
Overhauling should be done at regular intervals.
Gravity disc should be chosen as per the specifications.
The lube oil feed system must be evaluated for ensuring the optimized operation.
The sump tank must be cleaned if there is heavy contamination and fresh oil should be fed to the minimal level.
The piping system should be cleaned, and the entire engine must be flushed if solid contaminants are found.