The world’s first natural gas powered container ships are getting national attention as the focus of the newest advertisement in the Think About It campaign sponsored by America’s Natural Gas Alliance (ANGA).

The ad, which launched today, highlights TOTE Maritime’s new liquefied natural gas (LNG) containerships. The ships have received praise within the shipping industry since the company made the announcement it was building them in December of 2012, but ANGA’s campaign is expected to catapult the project to the national stage, drawing attention to innovation and environmental responsibility in U.S. maritime shipping.

“TOTE Maritime is the first U.S. maritime company to announce the conversion of its fleet to natural gas,” noted Anthony Chiarello, President and CEO of TOTE, the parent company of TOTE Maritime. “Switching to natural gas will significantly reduce our emissions, improving air quality for our employees and the communities we serve.” 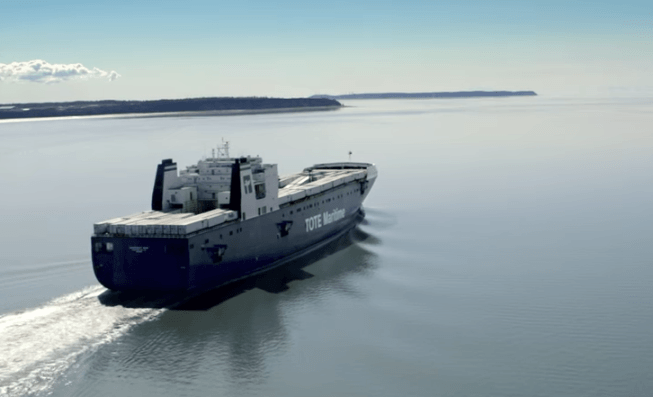 Construction of the first of two new Marlin class ships is nearing completion at the General Dynamics NASSCO shipyard in San Diego, Calif. The first ship will enter service between Jacksonville, Fla., and San Juan, Puerto Rico later this year as the most advanced, environmentally responsible vessel of its kind. The second ship will enter service in early 2016.

TOTE also has plans to convert two of its existing ships serving Anchorage, Alaska, from the Port of Tacoma, Wash., to LNG by 2017. In both markets, the use of natural gas will significantly reduce particulate matter and carbon dioxide emissions along with sulfur oxide and nitrogen oxide.

Mark Tabbutt, Chairman of Seattle-based Saltchuk, the owner of TOTE, commented, “We are proud of TOTE and the work that it is doing to advance LNG as an alternative maritime fuel. It’s an honor and a privilege to have this story told on a national scale.”