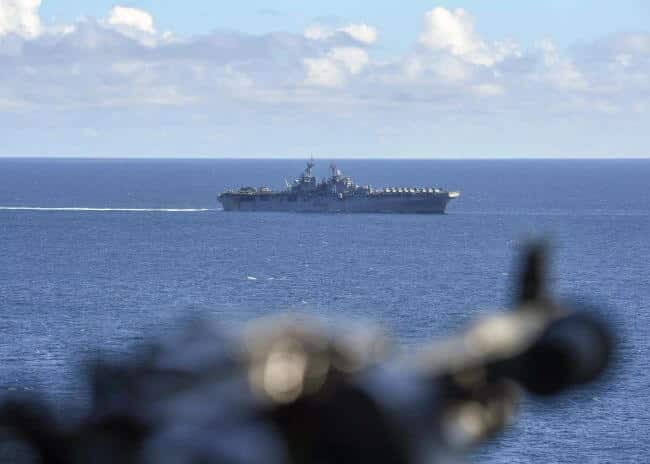 This post has been updated with additional details on the downing of the Iranian drone.

Amphibious warship USS Boxer (LHD-4) took down an Iranian drone that U.S. officials say threatened the ship as it entered the Persian Gulf on Thursday.

At about 10 a.m. local time, Boxer was transiting Strait of Hormuz when an Iranian fixed-wing drone approached the ship, a defense official told USNI News.

“A fixed-wing unmanned aerial system (UAS) approached Boxer and closed within a threatening range. The ship took defensive action against the UAS to ensure the safety of the ship and its crew,” a Pentagon spokesman said in a Thursday afternoon statement provided to USNI News.

The statement did not detail the method in which Boxer downed the drone. The ship is armed with RIM-7 Sea Sparrow short-range anti-ship missiles, and the RIM-116 Rolling Airframe Missile (RAM) and Phalanx CIWS point defense weapons systems. Additionally, the Navy and the Marine Corps have begun to field a wide variety of non-kinetic systems capable of downing a drone by other means.

Photographs released by the Navy in January, show Marines operating the MRZR-mounted, anti-UAS Marine Air Defense Integrated System on the deck of Kearsarge as part of the ship’s force protection regime as it transited the Suez Canal. USNI News understands the 11th Marine Expeditionary Unit aboard Boxer also deployed with the system and that it’s the likely weapon that was used to splash the Iranian drone.

Military.com reported that MADIS was used in the engagement. In March, USNI News reported that the Marines were experimenting with the capability before developing a version to deploy with Marine JLTVs. 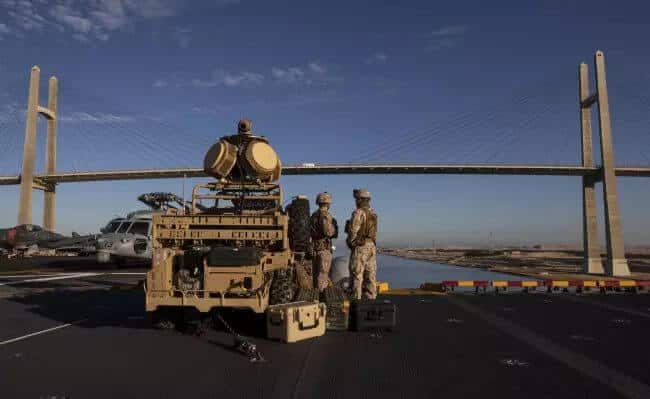 “The MADIS system connects mature radars, passive detection sensors, optics and jammers – and soon a kinetic kill option will be integrated in, likely a small drone that could shoot down another small drone,” reported USNI News.

News of the intercept first came from a press event at the White House in which President Donald Trump told reporters of the downing of the Iranian drone.

“This is the latest of many provocative and hostile actions against vessels operating in international waters,” Trump told reporters in the White House on Thursday afternoon.

The downing of the Iranian drone comes as the Iranian Revolutionary Guard Corps Navy announced they had seized a UAE-owned, Panamanian-flagged tanker and follows reports of Iranian harassment of a British owned tanker last week.

Boxer has been operating in U.S. Central Command since mid-June with the 11th MEU and two other amphibious warships.

The ARG left San Diego, Calif., on May 1 on a scheduled deployment. In addition to Boxer, the Abraham Lincoln Carrier Strike Group has been patrolling in the Gulf of Oman and the North Arabian Sea since mid-May.

The presence of large fixed-wing Iranian drones near the Persian Gulf is not new, with carriers and other U.S. warships rotating through the region having interactions with them in recent years. However, the drones typically keep their distance, making sure the U.S. ships see them but not coming close enough to where ships have had to shoot them down.