Slowing growth in the size of the shipping fleet will reduce the shortage of officers over the coming years, according to the latest Manning report published by global shipping consultancy Drewry.

The global shipping fleet – encompassing all sectors except the non-cargo carrying ship types, such as tugs and passenger ships, and smaller coaster vessels, such as oil tankers and bulk carriers of less than 10,000 dwt – is expected to rise by a mere 300 vessels through 2016-2020. As a result, the shortage in officer supply is forecast to reduce from 20,900 at the end of 2015 to 7,700 by the end of 2020. 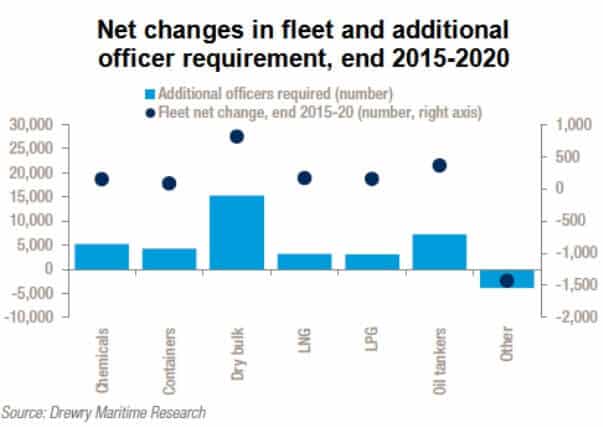 The year 2015 proved to be a dreadful one for the entire shipping sector, with the exception of oil tankers. Weak demand, coupled with falling commodity prices and oversupply of tonnage in most sectors led to rates collapsing to levels unseen since the global financial meltdown in 2008-2009. Growing concerns in the global economy and depressed freight earnings have forced owners to refrain from contracting new orders, while order cancellations and vessel demolitions have become a regular feature of the market.

Poor freight earnings are forcing owners and operators to reduce costs, in turn keeping any increase in wage levels to a bare minimum. While manning costs for 2016 are largely similar to those in 2015, in some sectors, such as LNG, there have been some uplifts in wage costs over the past year. However, the offshore sector, in particular, has witnessed wage reductions in light of falling oil prices and an uncertain economic outlook.

“With the growth in the size of the cargo carrying fleet tapering off, we expect the ongoing officer shortage to ease and for wage costs to increase modestly over the next five years”, said Nikhil Jain, senior analyst at Drewry.

Container Equipment Prices Have Peaked And Are Expected To Moderate: Drewry
Officer Shortfall To Reach Decade High By 2026: Drewry