When Hurricane Harvey slammed into the Texas coast in 2017, displaced residents flocked inland, trying to rebuild their lives in the disaster’s aftermath.

Within decades, the same thing could happen at a much larger scale due to rising sea levels, says a new study led by USC Computer Science Assistant Professor Bistra Dilkina.

The study, published in PLOS ONE, Jan. 22, is the first to use machine learning to project migration patterns resulting from sea-level rise. The researchers found the impact of rising oceans will ripple across the country, beyond coastal areas at risk of flooding, as affected people move inland. 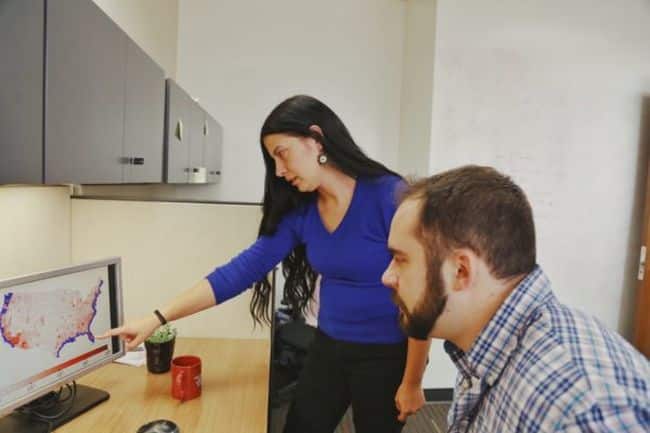 In the US alone, 13 million people could be forced to relocate due to rising sea levels by 2100. As a result, cities throughout the country will grapple with new populations. Effects could include more competition for jobs, increased housing prices, and more pressure on infrastructure networks.

“Sea level rise will affect every county in the US, including inland areas,” said Dilkina, the study’s corresponding author, a WiSE Gabilan Assistant Professor in computer science at USC and associate director of USC’s Center for AI for Society.

“We hope this research will empower urban planners and local decision-makers to prepare to accept populations displaced by sea-level rise. Our findings indicate that everybody should care about sea-level rise, whether they live on the coast or not. This is a global impact issue.”

According to the research team, most popular relocation choices will include land-locked cities such as Atlanta, Houston, Dallas, Denver and Las Vegas. The model also predicts suburban and rural areas in the Midwest will experience disproportionately large influx of people relative to their smaller local populations. 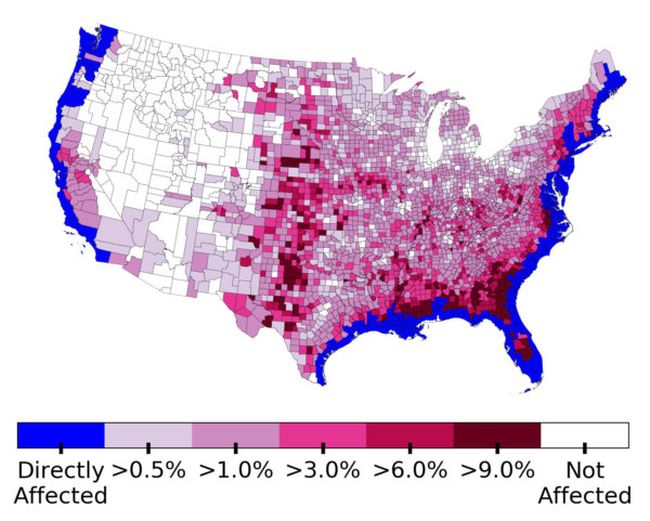 Sea-level rise is caused primarily by two factors related to global warming: added water from melting ice sheets and glaciers and the expansion of sea water as it warms. Within just a few decades, hundreds of thousands homes on the US coast will be flooded. In fact, by the end of the century, 6 feet of ocean-level rise would redraw the coastline of southern Florida, parts of North Carolina and Virginia and most of Boston and New Orleans.

To predict the trajectory of sea-level rise migration, the researchers took existing projections of rising sea levels and combined this with population projections. Based on migration patterns after Hurricane Katrina and Hurricane Rita, the team trained machine learning models—a subset of artificial intelligence—to predict where people would relocate.

“We talk about rising sea levels, but the effects go much further than those directly affected on the coasts,” said Caleb Robinson, a USC visiting doctoral researcher from Georgia Tech advised by Dilkina and the study’s first author. “We wanted to look not only at who would be displaced, but also where they would go.”

As expected, the researchers found the greatest effects of sea-level rise migration will be felt by inland areas immediately adjacent to the coast, as well as urban areas in the southeast US. But their model also showed more incoming migrants to Houston and Dallas than previous studies, which flagged Austin as the top destination for climate migrants from the southeastern coast.

This result, notes the researchers, shows that population movement under climate change will not necessarily follow previously established patterns. In other words: it is not business as usual.

The results of this study could help city planners and policymakers plan to expand critical infrastructure, from roads to medical services, to ensure the influx of people has a positive impact on local economies and social well-being.

“When migration occurs naturally, it is a great engine for economic activity and growth,” said co-author Juan Moreno Cruz, an economist and professor at the University of Waterloo.

“But when migration is forced upon people, productivity falls and human and social capital are lost as communities are broken apart. Understanding these migration decisions helps economies and policy makers prepare for what is to come and do as much as possible to make the influx of migration a positive experience that generates positive outcomes.”