Over the past year, significant progress has been made with digitisation and the energy transition, in particular through the launch of PortXchange, the proposed expansion of the heat supply network, and the agreement between the Port Authority and various companies to work towards the capture, transport and storage of CO₂. 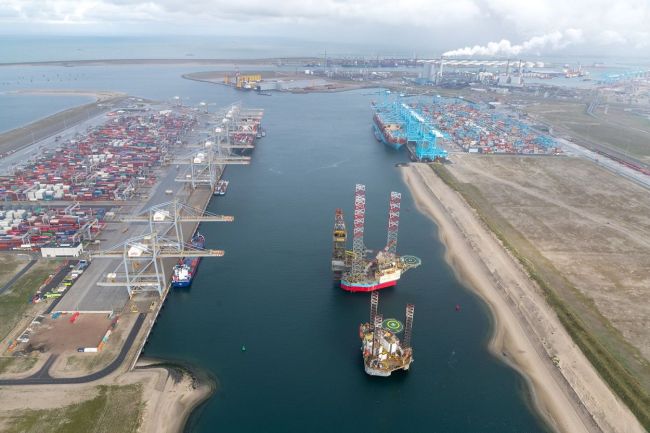 Allard Castelein, the Port of Rotterdam Authority CEO: ‘The Port of Rotterdam has matched the transhipment volume recorded in 2018. Of course, we are working hard to further increase our leading position and are investing heavily to achieve this. However, the success of a modern port cannot be measured by throughput tonnage alone. Our customers no longer just want increased throughput capacity, but demand a better, faster and, above all, smarter port. Equally crucial for the future is that industry succeeds in accelerating the energy transition so that the Port of Rotterdam can make a real impact towards achieving the Dutch climate objectives. To help make this happen we need a decisive and proactive government that works together with the business community.’

Total throughput of liquid bulk in 2019 (211.2 million tonnes) was almost the same as in 2018 (211.8 million tonnes). Within this segment, crude oil throughput exceeded 100 million tonnes for the fifth consecutive year and increased by 3.9%. Investments in recent years have expanded the production capacity of refineries either located in Rotterdam or connected to Rotterdam, leading to an increase in the amount of crude oil refined in 2019. Crude oil stocks have also grown in recent months.

The throughput of mineral oil products fell as a result of lower imports and exports of fuel oil. This downward trend over the past few years intensified in 2019 as a result of tightened global emission regulations for shipping that came into effect on 1 January 2020.

The increase in LGN throughput was mainly due to the import of a greater proportion of the gas produced around the Atlantic ocean into Europe, instead of being exported to Asia. The increase in other liquid bulk is accounted for by the import and export of biofuels, particularly biodiesel.

Dry bulk throughput decreased by 4% to 74.5 million tonnes (2018: 77.6 million tonnes). The fall in coal throughput was considerable (-14.8%). The share of coal in Dutch and German power generation has decreased significantly as both countries are generating more power from solar, wind and gas. Throughput of coking coal also came under pressure as a consequence of declining steel production in Germany. The annual iron ore and scrap throughput remained almost the same as in 2018. This is a good result considering the reduction in steel production in Germany. Biomass throughput increased by 62.8%, mainly due to the import of wood pellets for co-firing in coal-fired power plants.

Following a good start in the first six months of 2019, growth in container transhipment was almost negligible during the second six months of the year. Container throughput measured in tonnes grew by 2.5%. Measured in TEUs, the standard unit for containers, the increase was 2.1% and the annual total was 14.8 million TEUs. Economic growth in the EU declined somewhat, particularly as a consequence of reduced industrial production in Germany. Moreover, as a consequence of declining production and decreased growth in world trade, shipments from Asia were cancelled in November and December. The shortsea segment also experienced the effects of lower economic growth as well as competition with other ports.

Roll on/roll off and other breakbulk

RoRo transhipment increased slightly in 2019 (+0.8%) despite the uncertainties surrounding Brexit. There were, however, significant fluctuations throughout the year, with throughput peaks as a result of stock build-up in the run-up to the proposed Brexit dates of 31 March and 31 October.

Annual throughput of other breakbulk increased by 2.9% as a result of an increase in extra cargo packages. Nevertheless, a decline in throughput was observable in the fourth quarter as a consequence of flagging German exports.

Investments made by the Port of Rotterdam Authority in 2019 were yet again at a high level. Gross investments including participations amounted to €338.3 million (2018: €408.1 million). Major investment projects included the construction of the Container Exchange Route (CER) on Maasvlakte, the rerouting of part of the Port Rail line via the Theemsweg route, and the construction of new quay walls for the Hartel Tank Terminal.

Site lease charges, the largest revenue item, decreased by 2.2% to €365.5 million. This decrease reflects a one-off gain in 2018 as a consequence of a price revision with retroactive effect.
Income from port dues paid by vessels when they call at the port increased by 0.6% to €304.3 million, due to a positive price effect.

Other income came to €36.7 million (2018: €31.1 million). This increase is the consequence of increases in returns from silt storage for third parties and from sand sales. Operating expenses rose by 2.0% to €273.2 million, mainly due to an increase in labour costs resulting from collective wage rises and the new senior staff scheme. By contrast, operating expenses fell. Depreciation costs increased as a result of the relatively high investment levels in previous years.

Progress has again been made over the past year with the phased redesign of the energy supply system and the stimulation of circular activities in the port, including the following:

With respect to digitisation, the following achievements can be reported for the book year 2019: