The Maritime Piracy Humanitarian Response Programme (MPHRP) is backing the film A Hijacking, which it describes as “brutally accurate in its depiction of the horror inflicted on the victims of pirate attacks”.

Directed by Danish Director Tobias Lindholm, the film – which was shot on a ship that had previously been hijacked by pirates and with expert help from those with knowledge of the realities of such attacks – opens in UK cinemas on 10th May.

The Maritime Piracy Humanitarian Response Programme (MPHRP) and ITF Seafarers’ Trust is inviting maritime press and journalists with a known interest in piracy to a special screening tomorrow, 26th March. 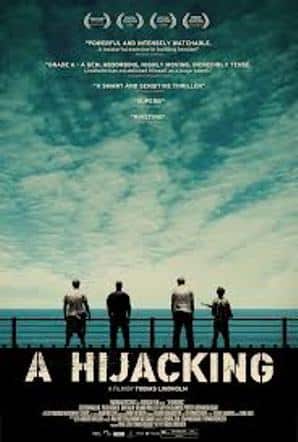 It will be held at the Soho Screening Rooms, 14 D’Arblay St, London W1F 8DY (www.sohoscreeningrooms.co.uk) at 10:00 (refreshments served) for 10:30 (screening begins). Please let dawson_sam@itf.org.uk know if you wish to attend.

MPHRP chair Peter Swift, commented: “A Hijacking may well be the first genuinely realistic portrayal of the sheer horror and brutality of modern piracy.”

He continued: “Despite the world’s reliance on goods shipped by sea the plight of seafarers running the daily risk of pirate attack and capture is not widely recognised. We hope that A Hijacking will help the public understand the horror that they face.”

Somali pirates are currently holding around 130 seafarers hostage. Every day the pirates use torture and the threat of death against hostages as a tool to extract massive ransoms. The seafarers suffer malnutrition and extreme deprivation and are routinely abused; several have been killed and used as human shields. The average time in captivity of those currently held is now over seventeen months. Every day of that period is likely to be marked by grotesque brutality and tactics such as phoning the victims’ families and making them listen to their loved ones being tortured.

The MPRHP is the lead organisation helping freed hostages and attacked seafarers and their families to cope with the physical and mental effects of capture, torture and the threat of pirate attack. It is funded by the ITF Seafarers’ Trust, the charity arm of the ITF (International Transport Workers’ Federation); the TK Foundation; Seafarers UK and the International Group of P&I clubs. For more details see www.mphrp.org