In an op-ed in Dagens Næringsliv, the largest daily business paper in Norway, Norwegian Shipowners Association and their CEO Sturla Henriksen say a definite NO to shipbreaking on beaches. -This is a major victory for Bellona and all other NGOs fighting against dangerous dismantling of ships, ​​Bellona advisor Sigurd Enge said.

The turnaround by the Norwegian Shipowners shows us that they now agree with the principle advocated by NGOs for years. Hazardous “beaching” should not take place in 2015. It is a dinosaur way of doing things, knowing that there are modern and safe solutions, Enge said.

Bellona advisor Sigurd Enge is clear that it is a brave decision that the Norwegian shipowners make today.

Norway becomes the first country in the world to discourage shipowners to scrap ships on beaches. 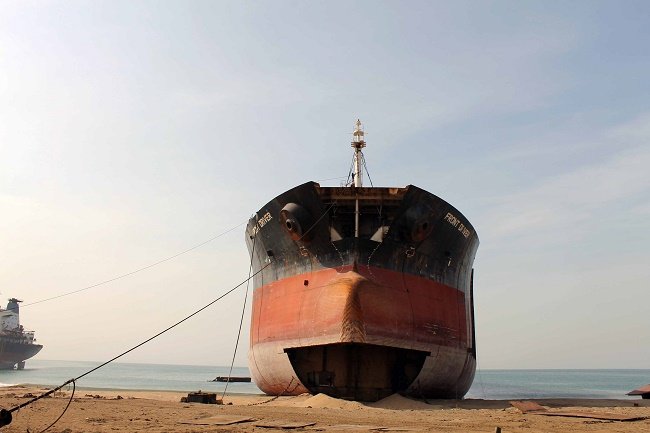 This news will make headlines globally , the Bellona advisor said.

On behalf of the NGO Shipbreaking Platform I am happy to announce that the Norwegian Shipowners’ Association now is on our team. This is a breakthrough in the international efforts to end the “beaching”. Bellona will definitely say “Look to Norway” when it comes to taking a stand against this old fashioned way of dismantling ships , Enge said.

This decision gives us more energy, and other countries should copy the Norwegians, the Bellona advisor said.

Bellona is particularly pleased that the NSA now wants to take an ambitious and serious corporate social responsibility. Bellona now expects that this decision will strengthen the growing market for serious shipbreaking.

Bellona has since 2005 been working against hazardous shipbreaking on the beaches of India, Pakistan and Bangladesh.

The environmental foundation has repeatedly pressured governments and shipowners to stop the practice. In total, around 150 ships controlled by Norwegian shipowners have been scrapped on beaches since 2009 and until today.

This has been 150 ships too many. This practice has been a dark chapter in Norwegian maritime traditions, and I am very happy that it seems to have come to an end today, Enge said.

Far from the end – the international struggle continues

Bellona and strong international partners in the NGO Shipbreaking Platform will continue to monitor the situation on the beaches of Southeast Asia.

There is a huge international struggle to continue this practice, Enge said. He refers specifically to the disclosure earlier in August, where two John Fredriksen-controlled ships from Golden Ocean ended up on beaches in Bangladesh and Pakistan.

NGO Shipbreaking Platform is a collection of 19 international environmental and human rights organizations. In its latest quarterly report for Q2 2014, the platform reports at least six casualties.

The fresh quarterly report shows that European shipping companies continue to send their ships for scrapping in Asia. In the second quarter, a total of 52 ships ended up on beaches in India, 42 in Bangladesh and 37 in Pakistan.

We expect that Norwegian shipowners now will follow the strong advice made by the Sturla Henriksen and the Norwegian Shipowners Association, Enge said.

I guarantee that Bellona will continue to name and shame Norwegian shipowners who now choose to close their eyes and ears, and literally stick their heads in the sand, Enge concluded.