Intelligent data processing is central to the performance of the new Doppler speed log created by oceanographic instrumentation specialist Nortek, which makes sure that accurate measurements of vessel speeds are available even in challenging conditions at sea.

Providing accurate and reliable measurements of speed through water is key to monitoring vessel performance. But it is a constant complaint in the industry that existing speed logs are generally neither reliable nor accurate enough to meet today’s performance requirements – and these issues have been confirmed by research.

Many speed logs on the market advertise high accuracy. They achieve this in ideal conditions, with calm water, no wind and no strong currents. But a speed log needs to be accurate in non-ideal conditions as well. 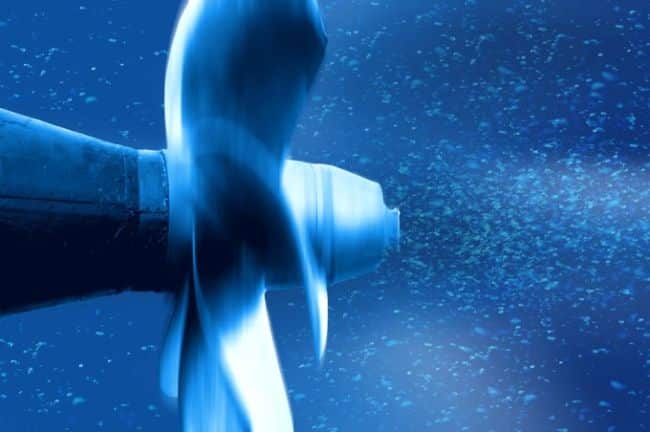 Nortek has therefore developed a speed log that has been shown to have much better accuracy than its competitors under real-life, challenging operational conditions. It has achieved accuracy to within around 0.5% consistently, even while sailing on the open ocean with varying wave and weather conditions.

Nortek’s speed log is now IMO approved. This comes after DNV GL has issued the «MED B» approval certificate for this groundbreaking, new speed log for the maritime market.

Why measuring speed through water matters

Accurate measurement of speed through water matters because it is this speed that helps determine a vessel’s operational efficiency and rate of fuel consumption.

Furthermore, the maritime industry is focusing on the EU’s new monitoring, reporting and verification (MRV) regulation as well as the International Maritime Organization’s data collection system (DCS) rules governing emissions reporting. These regulations and rules mean there is an increasing focus on performance monitoring on board vessels – and that requires accurate measurement of speed through water.

Measuring speed through water is a challenging task

Measuring speed through water can be done using a speed log, which calculates the speed from a sensor mounted on the hull underwater, but it is not straightforward. There are a lot of variables to be considered.

One of the most challenging issues is that the vessel itself creates a flow field around the hull. If speed through water is measured within this field, you can end up measuring the wrong speed. This field will vary dynamically with changes in vessel, speed, draft and trim.

A moving vessel also experiences pitch and roll – another factor that affects the readings. On top of this, flow patterns in the boundary layer around the hull created by the vessel’s movements need to be distinguished from ocean currents to ensure accurate speed measurement. Speed logs – especially widely used electromagnetic (EM) logs – often have poor reliability and become less accurate over time. They are also difficult to recalibrate, and often provide poor data quality, logging and data transfer.

Adjusting log data to compensate for the resulting errors is both time-consuming and complex, using valuable resources that the industry could better employ elsewhere.

With that in mind, Nortek’s engineers decided to develop what the maritime industry needs: a speed log that works! One that meets the needs of a digital world by providing real-time, reliable and accurate measurements.

The Doppler-based Nortek Speed Log 500 kHz (NSL500) has been developed in close collaboration with the maritime industry, taking advantage of Nortek’s experience gained over more than 20 years developing instruments to measure movement in water using the Doppler principle.

The NSL500 carries integrated sensors to correct for temperature, draft, pitch and roll. Advanced algorithms then adjust measurements based on these input parameters to ensure accuracy. Not only does it measure speed through water, speed over ground and distance, it also provides temperature and current profiles too, enabling owners to plan routes for better fuel efficiency.

Nortek’s engineering team has carried out three pilot projects to test the instrument’s reliability and accuracy in everyday practical situations. Installation of the NSL500 on board the three pilot vessels was completed within hours, and Nortek worked with the owners to provide easy retrofit solutions.

The first pilot, initiated in 2017, involved installing the speed log on a ro-ro cargo ship that sailsalong the Norwegian coast. As the vessel’s route took it past weather buoys fitted with ocean current meters (including a Nortek Aquadopp current meter), it was possible to make an accurate comparison of the data from these buoys, speed over ground data from GPS, and the NSL500 speed log on the ship. The results showed a close correlation between the readings. Nortek’s NSL500 also impressed with its ability to accurately read a current speed of just 8 cm/s, when the vessel was travelling at 13–14 knots.

In the second pilot project, an NSL500 speed log was installed on another Norwegian cargo ship in summer 2018. This project was carried out with the Norwegian Research Council, Rolls-Royce (now a part of Kongsberg), the Norwegian University of Science and Technology (NTNU) and the Norwegian Meteorological Institute.

This time the vessel had a very pointed hull, which meant the NSL500 had to contend with greater vessel motion. That motion became extreme when the ship encountered the worst sea conditions in our tests during a major storm at Christmas 2018, providing a stiff test for the speed log.

The vessel sailed out of Kristiansund in Norway, before returning safely to port in waters that can be difficult to navigate at the best of times – they are in the same area where the Viking Sky passenger liner ran aground, just three months later.

The on-board instruments showed wind speeds of 20 m/s and a rudder angle of 25 degrees, so the vessel was struggling to move forward and avoid drifting.

Noise in the data intensified as the storm worsened, but it was possible to apply standard deviation to the figures to assess accuracy. This varied in a narrow range, between 0.01 m/s and 0.2 m/s, showing that the NSL500 was still able to provide accurate readings even in the roughest of conditions.

The third pilot project tested the speed log’s abilities on the open ocean. In December 2018, the NSL500 speed log was fitted on a bulk carrier sailing long distances around the globe. The log provided stable readings consistently over multiple voyages and performed favorably when compared to the vessel’s existing EM log. Assessing data recorded over three days in the Strait of Malacca and the Indian Ocean, the NSL500’s standard error mean value was 0.074 knots at a mean speed through water of 13.3 knots – which is an error of just 0.55%. By contrast, the vessel’s existing EM log has an offset error of 1.5–2 knots when measuring speed through water at similar speeds.

The NSL500’s current measuring capacity meant the carrier’s crew could also accurately assess the strength of variable currents, such as the Agulhas current off South Africa.

The NSL500 provides reliable readings over time and is self-calibrating, meaning that installation and commissioning are simplified and there is no need for further adjustment at sea. Nortek provides installation solutions for newbuilds and retrofits and can provide installation assistance. Pitch and roll and the vessel’s draft are all accounted for in Nortek’s algorithms.

In addition, the log can measure speed over ground in water depths up to 200 m and measure both the strength and direction of ocean currents. It also functions independently of water salinity, avoiding a major calibration problem for EM logs and other Doppler logs.

Nortek has listened to vessel owners and operators and has provided the improved speed log they were seeking – capable of accurate, reliable performance anywhere.

OOCL Honored And Recognized For Outstanding Green Leadership
Want to share your tips and advice? Got questions? Visit the community forum to ask questions, get answers, meet people, and share your tips!