On 25 December 2015 a ceremony of signing the acceptance act to icebreaker Murmansk, project 21900 М, took place at Vyborg Shipyard PJSC (a corporate member of the United Shipbuilding Corporation). The icebreaker was built by Vyborg Shipyard PJSC in collaboration with Arctech Helsinki Shipyard, by order of Federal Agency of Maritime and River Transport of Russian Federation.

The document was signed by the top management of FSUE Rosmorport, United Shipbuilding Corporation (USC), Vyborg Shipyard PJSC. Under the terms of contract signed in 2012, Vyborg Shipyard PJSC was to carry out the full range of design and construction works of a series of linear diesel-electric icebreakers, project 21900 М. The lead cebreaker Vladivostok was delivered to the customer in October, 2015. 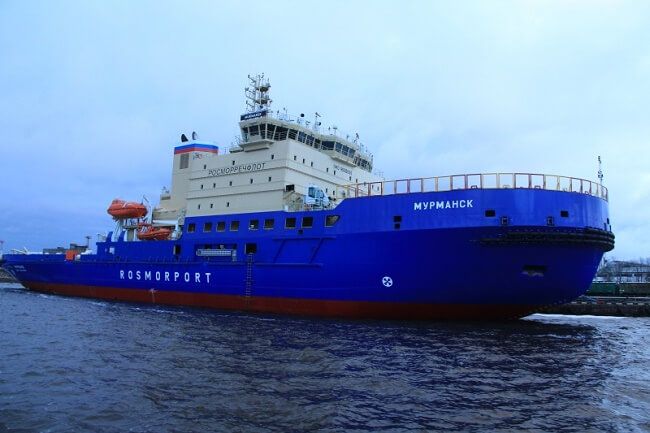 “Icebreakers of the 21900 М project will ensure winter navigation in the Baltic Sea, to a certain extent in the Arctic, pursue tasks set forth by FSUE Rosmorport and the Government of the Russian Federation. I wish fair wind and full sails to icebreaker Murmansk as well as accident-free navigation to its crew”, Alexander Solovyev, Vyborg Shipyard PJSC General Director noted.

Within the framework of this festive occasion, icebreaker Murmansk hoisted the RF State Flag. The ceremony was attended by the officials of the RF Government, Government of the Leningrad Region, Federal Agency of Sea and River Transport, Russian Maritime Register of Shipping as well as partners of the shipyard.

Vice President for civil shipbuilding of USC, Eugeniy Zagorodniy, congratulating the attendees of signing the acceptance act, said: “This festive pre-New Year occasion is an indicator of the joint effort, which resulted in a modern vessel to serve for the good of the Baltic civil fleet and exploration of the Arctic. My congratulations to the entire staff of the shipyard on the successful icebreaker delivery and I wish it continued keeping up the good work next year, and USC will do its best to boost the shipyard new orders.”

Konstantin Palnikov, Director General of Russian Maritime Register of Shipping, commented upon: “As a classification society, Russian Maritime Register of Shipping (RS) contributes actively to the implementation of the programme for the icebreaker fleet construction in Russia. The ships of the project 21900 М present a new generation of diesel-electric icebreakers. They are of high performance and consider the operating experience of icebreakers as per the previous projects while providing icebreaker assistance in winter navigation period in the Gulf of Finland”.

The keel-laying ceremony of icebreaker Murmansk was held at Vyborg Shipyard on 26 December 2012. The ship is designed to break ice up to 1.5 m thick. The vessel is intended for independent ice escorting of heavy-tonnage vessels; towage, fire fighting on floating and other facilities; salvage and assistance to distressed vessels; transportation of effective cargoes.

The third icebreaker in the series – Novorossiysk – will be delivered to the customer at the turn of 2016.