Mitsubishi Heavy Industries, Ltd. (MHI) has received two orders for the “Sayaringo STaGE,” a next-generation LNG (liquefied natural gas) carrier. One LNG carrier each will be delivered to two JVs which Chubu Electric Power Co., Inc. has established with Mitsui O.S.K. Lines, Ltd. (MOL) and Nippon Yusen Kabushiki Kaisha (NYK Line), respectively. The Sayaringo STaGE features a new design that achieves significant improvements in both LNG carrying capacity and fuel efficiency through the adoption of a more efficient hull structure and an innovative hybrid propulsion system. Both vessels on order are scheduled for completion and delivery in 2018. They will be put into service for transporting shale gas produced in North America, mainly carrying the gas from the Freeport LNG Project1, an initiative in which Chubu Electric Power is participating.

The two orders for the Sayaringo STaGE LNG carrier were received through MI LNG Company, Limited, a joint venture between MHI and Imabari Shipbuilding Co., Ltd. The vessels will be constructed at MHI’s Nagasaki Shipyard & Machinery Works. Specifications will be LOA (length overall) of 297.5m, width of 48.94m, depth of 27.0m and draft of 11.5m. Each carrier comes with four apple-shaped tanks, an improved version of Moss-type2 tanks designed with a bulging upper half. Total holding capacity of the tanks will be 180,000 cubic meters (m3). The adoption of a tank cover integrated with the hull structure, developed by MHI with support from Aker Arctic Technology Inc., enables a lighter vessel while fully retaining overall structural strength. The new design also reduces wind resistance during navigation. The Sayaringo STaGE has a width allowing for passage through the newly expanding Panama Canal that is expected to go into service early in 2016, thereby enabling an efficient increase in LNG transporting capacity. 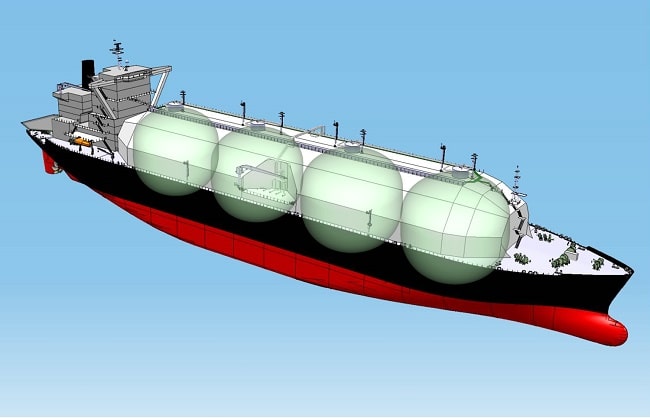 The LNG carriers on order feature a hybrid propulsion system dubbed “STaGE” (Steam Turbine and Gas Engines). Plant efficiency has been substantially improved through the effective use of the engine’s waste heat for steam turbine, resulting in a propulsion system enabling high-efficiency navigation throughout a full range of speeds.

In recent years demand for LNG as a fuel for generating power has been increasing worldwide, Japan included. Meanwhile, LNG produced in North America in tandem with America’s “shale gas revolution” is projected to grab an expanding share of the global market going forward, a trend that is resulting in longer LNG transport distances. The latest two orders come on the heels of an order for two Sayaringo STaGE LNG carriers in April, preceded by an order placed in January for two next-generation LNG carriers to transport shale gas produced in North America.

Effective October 1 MHI will launch a wholly owned ship construction company and transfer all operations in the construction of large-scale commercial ships in the Nagasaki district to the new entity. Through this initiative its shipbuilding structure will be transformed to focus into the construction of gas carriers, a vessel type in which it excels. Regarding next-generation LNG carriers, the company will pursue enhancement of quality and competitiveness by streamlining production through continuous construction.

1 The Freeport LNG Project is a project under way at the Freeport LNG terminal being developed by Freeport LNG Development, L.P. in the U.S. state of Texas. The project calls for the establishment of a new natural gas liquefaction facility to refine and liquefy shale gas and other natural gases produced in the U.S. at a rate of up to 13.2 million tons per year. The launch of commercial production is scheduled for around 2018.

2 Moss-type tanks are independent spherical tanks that are fixed to the hull by a cylindrical skirt.