Published on 22nd July, a new report from the International Chamber of Commerce (ICC) International Maritime Bureau (IMB) highlights a continuing trend in South East Asia in the hijacking of small coastal tankers by maritime pirates, averaging one attack every two weeks.

According to the report, five small tankers were hijacked in South East Asian waters in the second quarter of 2015 alone, bringing the total number of vessels hijacked globally in 2015 to 13.

IMB has stressed however that enhanced cooperation between regional authorities is paying off and that early detection of approaching skiffs has resulted in attacks being aborted.

IMB highlighted the tracking and arrest off Vietnam of an eight-man Indonesian gang responsible for the hijacking of a Malaysian tanker last month. IMB also praised the Malaysian authorities for the June conviction of nine Indonesian pirates, apprehended after the January hijacking of an anchored product tanker off Johor.

Pottengal Mukundan, Director of IMB said: “Information sharing and coordinated action between concerned coastal states is crucial in responding to this threat. We commend the effort that caught one gang and also the hefty custodial sentences imposed on another which will help deter further incidents.”

The latest global report reveals that a total of 134 incidents of piracy and armed robbery against ships were reported to the IMB Piracy Reporting Centre (PRC) in the first six months of 2015; an increase on the 116 reports for the corresponding period in 2014. 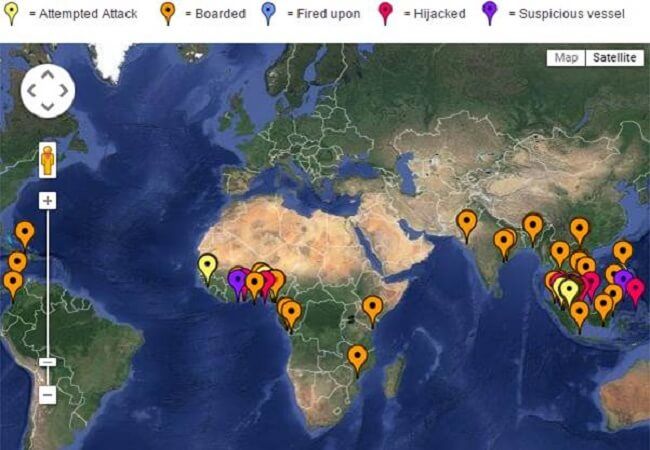 Pirates managed to board 106 vessels and were responsible for 13 hijackings and 15 attempted attacks worldwide. So far in 2015, 250 crew members have been taken hostage, 14 assaulted, 10 kidnapped, nine injured and one killed.

According to the latest statistics, while more than a third of incidents reported to the PRC took place off the coast of Indonesia, the majority of these related to low-level, opportunistic thefts from vessels,.

The IMB report notes a significant increase in the number of incidents off Bangladesh and Chittagong in particular, with 10 reports made in the second quarter of 2015 compared with only one in the first quarter. Again, these attacks related to armed robberies from vessels.

Encouragingly, in the second quarter of 2015, no reports were received off the coast of Somalia.

Although no attacks have been reported off Somalia, IMB advises that the security situation in the Horn of Africa remains uncertain. IMB urges ship masters to remain vigilant when transiting these waters and to adhere to the industry’s Best Management Practice.

As the world’s only independent centre to receive reports of pirate attacks worldwide 24hours a day, IMB also calls on all shipmasters and owners to report any actual, attempted or suspected piracy and/or armed robbery incidents to its Kuala Lumpur-based Piracy Reporting Centre.

The IMB Piracy Reporting Centre is the world’s only independent office to receive reports of pirate attacks 24-hours-a-day from across the globe. IMB strongly urges all shipmasters and owners to report all actual, attempted and suspected piracy and armed robbery incidents to the IMB Piracy Reporting Centre. This first step in the response chain is vital to ensuring that adequate resources are allocated by authorities to tackle piracy. Transparent statistics from an independent, non-political, international organization can act as a catalyst to achieve this goal.