The spectre of large, disposable crafts bearing hundreds of migrants across dangerous waters in the new year was borne out in terrifying fashion this past week as more than 1,000 migrants, most fleeing Syria, had to be rescued in the Mediterranean Sea.

According to survivors’ accounts, the crews of both vessels deliberately abandoned men, women and children aboard, setting courses for the Italian coastline despite the very real possibility that hundreds might drown.

The Moldova-flagged Blue Sky M, which carried 736 people, came to shore on New Year’s Eve in Apulia. It was met by an IOM staffer who was able to debrief at least a dozen Syrian passengers before they were taken to reception centres in Italy. Those passengers described a perilous weeklong journey that cost those on the boat between USD 4,000 and USD 6,000 paid to smugglers based in Turkey.

A second ship, a former cattle hauler called The Ezadeen, was abandoned by its crew with 359 Syrian refugees (including 62 minors) on board and was towed ashore to Calabria by the EU Triton mission over the weekend.

“Migrants told us that during the trip they were strictly controlled by the smugglers, who forced them to remain seated, and that the weather conditions were extremely bad,” said IOM’s chief spokesperson in Italy, Flavio di Giacomo.

IOM Italy said local authorities are investigating reports that the smugglers abandoned the ship after locking in the automatic pilot, as media outlets have reported. Some witnesses apparently have told investigators they saw the skipper of the Blue Sky M locking the automatic pilot, but that he did not abandon the ship: rather he remained on board, pretending to be one of the migrants. This person is now being questioned by the Italian police. 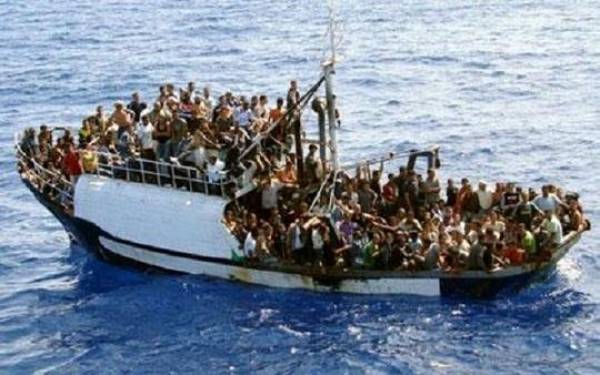 Media reports on these latest arrivals have quoted prices as high as USD 8,000 per person, which IOM has not been able to verify. IOM analysts do believe the prospect of single-nationality cargoes – on these latest voyages, migrants fleeing Syria – creates opportunities for smuggling rings to employ certain economies of scale that were not apparent in the more “mixed” passenger manifests seen leaving Egypt and Libya in 2014.

“The predictability of thousands now fleeing Syria every month allows smugglers to plan for a reliable stream of customers, which of course allows them to set a price point,” explained Joel Millman, a spokesperson for IOM in Geneva. “So they can predict how much revenue each trip will bring, and then quickly deploy vessels and crews.”

Through the first 11 months of 2014 Italy reported 163,368 migrants had been rescued at sea, about three times the total arriving in 2013. For the past year, Syrians were the most numerous contingent, with just under 40,000 arrivals coming by November 30 last year, followed by just over 34,000 Eritreans.

More than 3,000 migrants went missing on the Mediterranean during 2014, presumed drowned when small, unsafe craft departing from North Africa foundered.

According to migrant testimonies gathered in other recent landings, the cargo vessels being used are very old and unsafe. Maritime experts calculate that such ships normally would be available for between USD 100,000 and USD 150,000, allowing smugglers to earn upwards of USD 3 million for voyages like the two that ended in recent days, with up to 900 migrants crammed on board.

“The situation is concerning because smugglers are making a lot of money – around 3 million US dollars for each journey – on long and dangerous sea crossings. With this money they can buy other boats and continue their activity along this or new routes,” said IOM Italy Chief of Mission Federico Soda.

That traffic remained heavy through the end of 2014 – over 2,000 migrants were rescued just during Christmas week, and now into the New Year – suggests that under present conditions it matters little whether the Mediterranean is being patrolled under Italy’s Mare Nostrum programme or its replacement, the Triton mission.

“This new route is a direct consequence of the Syrian crisis,” added IOM’s Soda. “Despite the end of the Mare Nostrum’s rescue-at-sea operations, arrivals continue because of the many crises close to Europe.”

“We have never seen so many arrivals during the winter: if the arrivals don’t decrease, it will not be possible to respond in an adequate way to such big numbers and the risk of shipwrecks will increase,” he concluded.