The Navy made its first payment on the LPD Flight II program this week, awarding Ingalls Shipbuilding $165.5 million on Aug. 2 for long lead time materials and advance construction activities for the first Flight II ship. Flight II will be based on the San Antonio-class amphibious transport docks (LPD-17) and will replace the ageing Whidbey Island-class dock landing ships (LSD-41/49). The under-construction LPD-28 and 29 are serving as “transition ships” to the Flight II design, with about 100 changes made between LPD-27 and LPD-28 to take cost out and move closer to the Flight II design, and an expected single-digit number of changes made between 28 and 29, USNI News previously reported. 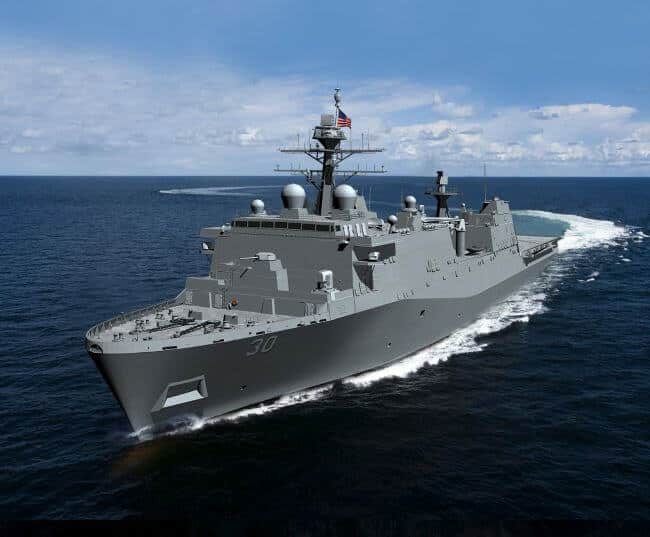 Chief among the changes was moving from the enclosed mast design from the earlier LPDs – which reduced the radar cross-section of the ship but was enclosed with a costly composite material made at the now-shuttered Avondale Shipyard – to a traditional stick mast and upgrading to a new Enterprise Air Search Radar (EASR).

According to an Aug. 3 news release by Huntington Ingalls Industries, the LPD Flight II design “will support new and emerging U.S. Marine Corps and Navy requirements such as the Ship-to-Shore Connector, CH-53K helicopter and improved troop armoury/weapons stowage.”

“This is a significant milestone as we embark toward a new flight of LPDs,” Ingalls Shipbuilding President Brian Cuccias said in the news release.
“The Flight II LPDs will be highly capable ships meeting the requirements and needs of our Navy-Marine Corps team. We look forward to delivering this series of affordable LPDs to our nation’s fleet of amphibious ships.”

According to the release, this funding will cover the purchase of long-lead-time material and major equipment, including main engines, diesel generators, deck equipment, shafting, propellers, valves and other systems.

After previously calling the LSD replacement effort the LX(R) program, the Navy settled on the LPD Flight II designation in April. There had also been some question as to specifically how many hulls would be transition ships and when the LX(R) program would start in earnest, and it was also announced in April that LPD-30 would be the first Flight II ship – creating a class of 13 Flight I and 13 Flight II ships in the program.

Though all Flight I ships were bought one at a time, there is already much talk of buying the Flight II ships in a multi-ship contract. In an Aug. 2 conference call with investors, HII President and CEO Mike Petters acknowledged that “there’s desire to go for multi-years for LPD, but we’re not there yet.”

Still, in an April Senate Armed Services Committee hearing, Navy acquisition chief James Geurts told senators that “it’s a derivative design, so that will be a high-confidence acquisition.”

“It would appear to me that the serial production opportunities for the continuous production of that LPD-17 would be right for either a multiyear or a block buy,” Geurts continued.
“Currently our next buy is in ’20. … If you were to add some economic order quantity or long-lead funding in ‘19, that could accelerate delivery of those. If that’s not available, we could do a block buy or a multiyear in FY ‘20. Putting some money in FY ‘19 would help schedule a little bit, but we could execute in either manner.”

LPD Program Manager Capt. Brian Metcalf said in a presentation in April that “the ideal build rate, according to the shipyard, is one-year centres. Right now the Navy’s program of record does not budget those ships on one-year centres. We have a gap in ‘19 and a gap in ‘21. We are looking to try to answer questions about whether it’s value-added to maybe fill in one or both of those gaps, or if we could execute some kind of block purchase of the follow ships” to provide additional program stability and cost savings for the Navy, the shipyard and the vendor base of more than 400 companies.

The keel for Fort Lauderdale (LPD-28) was laid last October, and fabrication has begun on the last Flight I ship, Richard M. McCool Jr. (LPD-29), according to the company. Fabrication on LPD-30 is scheduled to begin in 2020.