The Korean shipbuilder in the Philippines announced that it signed a contract to build three 20,600 TEU container ships with CMA CGM, the biggest shipping company in France.

This ultra-large container vessel measuring 400m in length, 59m in breadth and 33m in depth is capable of carrying 20,600 20ft containers. A deck alone is as large as four football fields. If the loaded containers are lined in series, they might reach up to Hoengseong, Gangwon-do from Seoul (126km). 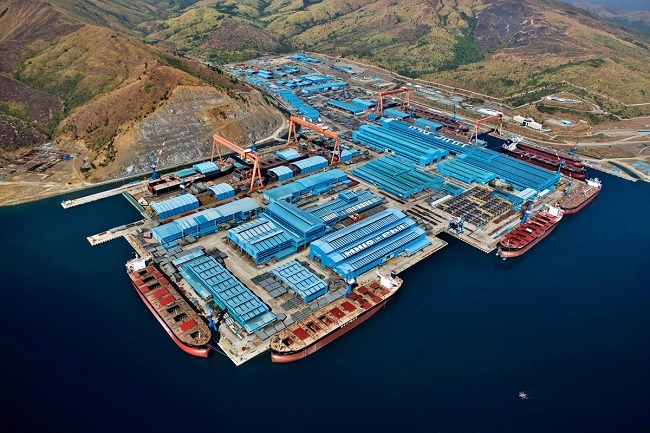 In case of container vessels, in general, as size increases, operational efficiency improves with lower cost and higher revenue. As competition among container shipping companies becomes fiercer these days, large container vessels have become more popular. Therefore, shipbuilders have concentrated on the development of large vessels. As a result, the capability to build an ultra large container ship has become a measure to assess shipbuilding companies.

In particular, HHIC-Phil’s Subic Shipyard is even capable of building two 20,000TEU container ships at the same time with the world’s largest dock (550m in length, 135m in breadth).

In response to clients’ requests, HHIC has reinforced hull structure such as fatigue design life to build 26,000 TEU-level container ships. In addition, the company focused on the improvement of environment-friendly performances including the installation of the latest high-efficiency engine, propeller design and development of an energy-saving system.

An official from the HHIC said, “Signing a contract to build 20,000 TEU-level ultra large container ships with CMG CGM, the world’s No. 3 shipping company, confirms the world-class shipbuilding technology and capability of HHIC.” With confidence, he added, “We have long accumulated extensive knowhow and enhanced our global reputation in the construction of container ships so that we now have no problem in building 20,000 TEU-level vessels. We are going to fully satisfy all our clients by delivering the finest quality and best value on time.”

Meanwhile, the container ships will be built at HHIC-Phil’s Subic Shipyard and handed over to the client in sequence after the second half of 2017.