GeoSea has taken delivery of the newest addition to its fleet, the self-propelled jack-up vessel ‘Apollo’. The vessel is sailing to Flushing (Vlissingen), the Netherlands to mobilise for its first assignments. One of its first duties includes a decommissioning project in the North Sea.

The pioneering new vessel will join the current fleet of DP class, self-propelled jack-ups, which includes the ‘Innovation’, ‘Neptune’, ‘Thor’, ‘Sea Installer’ and ‘Sea Challenger’. One of the exceptional features of the ‘Apollo’ are its extremely long lattice legs of 106.8 m, which allow the vessel to jack-up in water depths up to 70 m. The vessel is equipped with an 800-tonne, leg encircling crane. The vessel has a large, spacious 2000 m² deck, which is free of obstacles and has a load carrying capacity of 15 t/m². 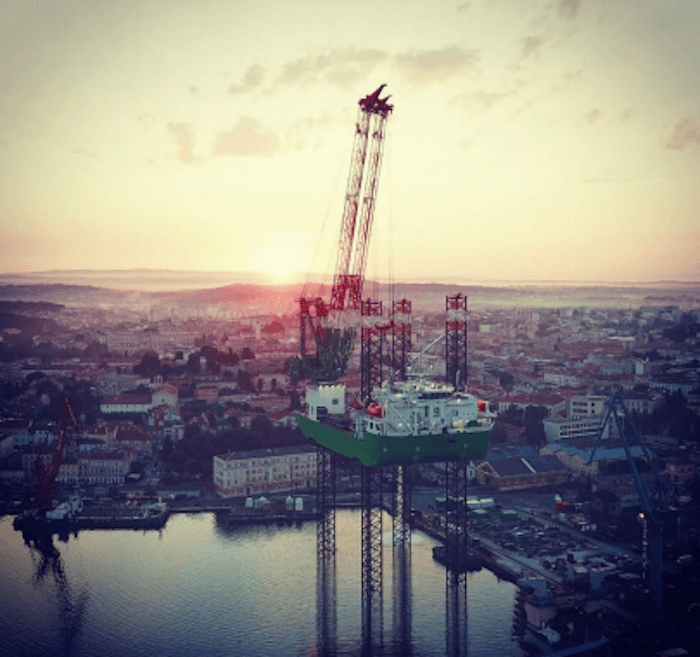 This versatile vessel will serve the offshore wind industry, but will mainly be deployed by DEME Group’s subsidiary EverSea to provide services to the oil and gas industry, with a particular focus on the installation and decommissioning of platform facilities. ‘Apollo’ will undergo some final outfitting in Flushing and will be mobilised for the first assignments.

One of its first duties includes a decommissioning project in the North Sea.

DEME’s fleet investment programme continues, with the dredgers ‘Bonny River’ and ‘Spartacus’, and offshore installation vessel ‘Orion’ currently being under construction. EverSea wins new contract and deploys ‘Apollo’ EverSea has been awarded a contract by Petrogas E&P Netherlands BV for the decommissioning of the Q1 HALFWEG unmanned gas platform in the Dutch Sector of the North Sea.

The scope of work comprises the Engineering, Preparation, Removal and Disposal, also referred to as EPRD, of the 500 tonne topside, including the four foundation legs. The topside will be removed and transported to shore by the ‘Apollo’. Engineering works are already ongoing and the actual removal work is scheduled to take place at the end of this year. Petrogas E&P Netherlands BV is an independent O&G operator which has interests in 11 offshore blocks on the Dutch Continental Shelf.

The Q1 HALFWEG platform is a three-well unmanned gas production facility which was installed in 1995. It was designed for ‘self-installation’ and consists of a concrete gravity base which supports a normally unmanned process deck by means of four tubular steel legs in a 24 metre water depth. The platform ceased production in 2017 and the wells have been decommissioned.

Securing this contract is an important milestone for EverSea in the upcoming decommissioning market in the North Sea. In the Dutch sector alone, 77 of the remaining 150 platforms are due for removal by 2025.