Davie – Canada’s largest shipbuilder – today a keel laying ceremony was held for MV Armand-Imbeau II. The ceremony marked the beginning of the hull assembly for this first of two sister-ships under construction at Davie for the Société des traversiers du Québec (STQ). The event took place at Chantier Davie in the presence of the Minister for Transport and the Implementation of the Maritime Strategy, Mr. Jean D’Amour, and the Chairman and Chief Executive Officer of the Société des traversiers du Québec, Mr. Jocelyn Fortier.

The two ferries for the Tadoussac‒Baie-Sainte-Catherine route are built for year-round navigation on the Saguenay Fjord. Measuring 92 metres long, each ship will include eight rows on two decks, enabling the transport of up to 110 vehicles, including tractor-trailers. The ferries use the latest generation in motorized systems including Liquefied Natural Gas engines. Instead of a conventional propulsion system, each ship uses electric thrusters. The MV Armand-Imbeau II is scheduled to be delivered in Fall 2015 followed by the MV Jos-Deschênes II, four months later. 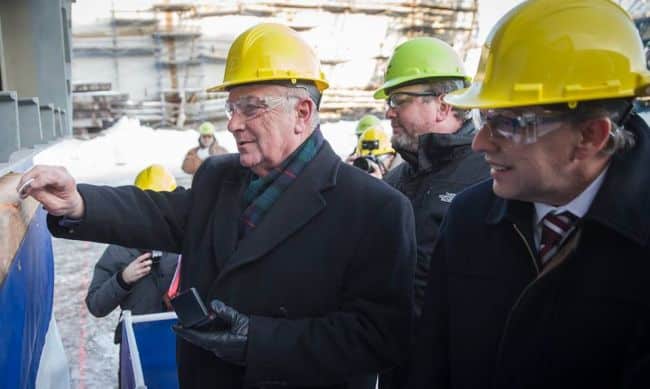 Mr. Alan Bowen, Davie’s chief executive officer, emphasised in his speech “We are very proud of the progress made. It is Davie’s ability to constantly deliver on time and to budget that lead to Davie being voted as North America’s number one shipyard at the Lloyd’s List North American Maritime Awards 2015, last week in Houston. Ferry construction is and has always been core business for Davie. The STQ ferries incorporate many of the technologies in which we specialize for example LNG propulsion, electrical thruster systems and high ice-class hulls.”

Mr. Jean D’Amour added “With the upcoming unveiling of the Maritime Strategy, this ceremony has a very particular significance for my government. With the construction of two ships for the Tadoussac crossing, the STQ continues the process of renewing its fleet, using an efficient green technology, which will allow users to broaden their experience on board its ferries. Chantier Davie provides its expertise for the benefit of the whole community, an expertise that will largely be used within the context of the very first Quebec Maritime Strategy.”

Mr. Fortier stated that the two new ferries will allow for an improved offering of crossing services as a whole. “The two current ferries for the Tadoussac crossing, put into service in the 80’s, marked a new era, mainly with the activation of the gangway from the wheelhouse.” “Even in 2015, 35 years later we are breaking new ground with the construction of two ferries with green technology and increased capacity. They will be the first LNG-propelled ferries built in North America. This technology and several other innovations on board will enable the Société des traversiers du Québec to be on the cutting edge of the maritime transportation of passengers in North America,” explained Mr. Fortier.