The vessel was named Spes Nova by Director of Fisheries and Rural Affairs at the Ministry of Agriculture, Nature and Food Quality for the Netherlands Nanou Beekman.

The Spes Nova, a UK-205 fly-shooter/twinrigger vessel, is part of a newly-developed range of fishing trawlers based on a Vripack Naval Architects design that sets new benchmarks for the entire sector. 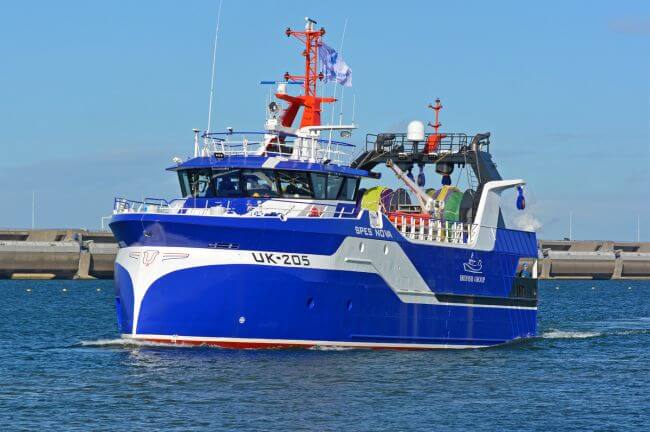 The original concept was borne of a collaboration between Vripack Naval Architects, Ekofish Group – a subsidiary of Van der Zwan – and Maaskant. This combination of expert marine design and extensive seagoing knowledge was a unique approach that led to an unconventional ‘future-proof’ solution.

Damen Maaskant Shipyards Stellendam was chosen to construct two such vessels for delivery in 2019 and early 2020. “Damen was chosen thanks to its reputation for high-quality shipbuilding,” says Gerard Zwijnenburg, owner of Van der Zwan. “Damen Maaskant Shipyards Stellendam also has an impeccable track record of vessel maintenance going back many years, so the project was certainly in good hands.” 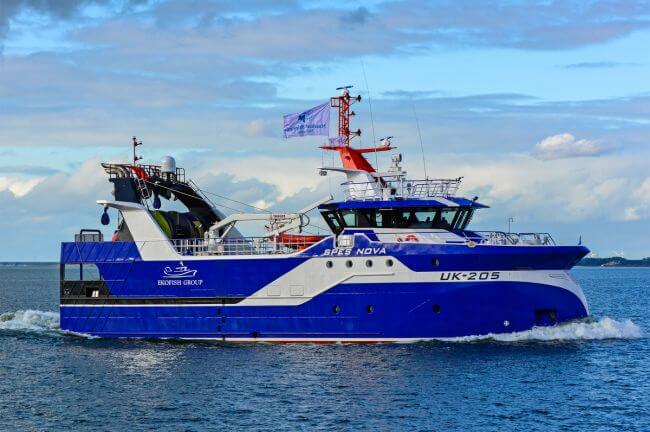 The vessels will help to set new performance standards in the Van der Zwan fleet, thanks to their innovative design. The UK-205 range features a new type of hull design to reduce pitching in head waves. “This is achieved by reducing reserve buoyancy in the bow above the waterline,” explains John van der Maas, project manager at Damen Maaskant Shipyards Stellendam. “An oncoming wave will lift the midbody, but will have less effect on the bow, which results in a softer motion. Rather than slamming into waves, the vessel splits them, reducing resistance and stress on the hull.”

In terms of propulsion, UK-205 vessels can be powered by diesel-electric or by conventional diesel engines, depending on the needs of each client. Gerard Zwijnenburg explains the logic behind Van der Zwan’s opting for a diesel-electric hybrid system in addition to a battery bank. “We’re thinking of the future,” he says. “The battery bank allows silent, emission-free running near populated areas, and also introduces the possibility of peak-shaving to help the vessels run at optimal energy efficiency.” 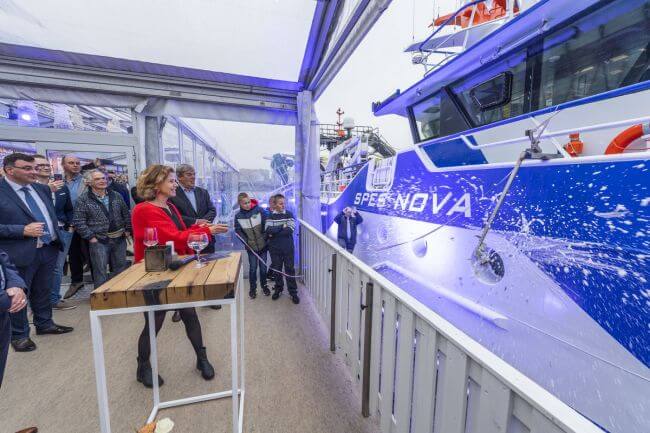 This potential for balancing and optimising energy use is complemented by an energy recovery source in the form of a 700-volt DC-bus connected to the battery bank. As the vessel’s winches let out the fishing nets, the E-motors can work as generators to convert braking energy into battery power, a method very similar to that used in hybrid cars. Along with the vessel’s capability to sail on two or three motors thanks to its inbuilt redundancy, these energy-optimising measures will help Van der Zwan cut operational costs without compromising quality of performance.

Spes Nova, the first Damen Maaskant vessel delivered to Van der Zwan, was put through classification tests in the third week of October, followed by North Sea fishing trials that same month, before returning to Stellendam for final touches in preparation for its naming in Scheveningen. The ship will soon begin its duties fishing for flatfish such as plaice, cod and turbot.