Chinese investigators looking into last week’s deadly capsizing of a packed cruise ship have collected a “multitude of first-hand evidence” and have interviewed many people including the captain, state media said on Wednesday.

Only 14 survivors, one of them the captain, were found after the ship carrying 456 overturned in a freak tornado on Monday night on the Yangtze River. Most of the passengers on the Eastern Star were elderly domestic tourists.

The 60-strong investigation team is made up of specialists in meteorology, ship design and manufacturing, shipping safety and computing, the official Xinhua news agency said, citing a government notice on the inquiry.

“It is subdivided into five groups probing meteorological conditions at the time of the Eastern Star’s sinking, the structure and retrofitting of the ship, its fitness to sail and sailors’ responsibility, and shipping safety supervision on the Yangtze River,” the news agency said. 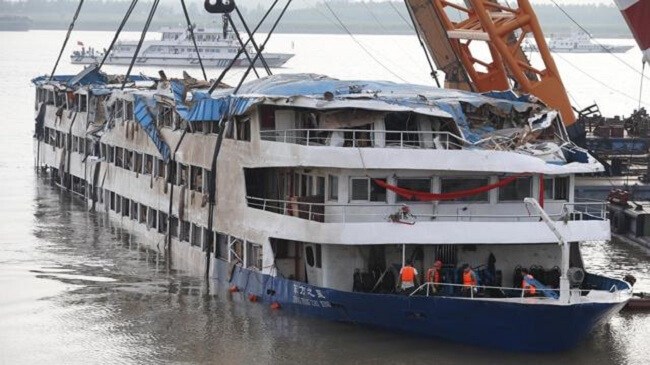 “Investigators have interviewed survivors, the captain included, shipping company managers, designers and builders of the Eastern Star, and witnesses from other ships.”

The company which operated the ship has apologized for the disaster and said it would “fully” cooperate with the investigation. The government has pledged there would be “no cover-up”.

Computer experts are trying to recover video footage and GPS data from devices recovered when the ship was righted on Friday, which should give details on the ship’s route, Xinhua said.

The investigation will be complex and the causes of the sinking “can only be determined through scrupulous scientific methods and simulation tests,” it added.

“The conclusion must be scientific and able to stand the test of time,” Xinhua said, quoting the government notice.

Carnival Signs MOA To Order First Cruise Ships Built In China For Chinese Market
Want to share your tips and advice? Got questions? Visit the community forum to ask questions, get answers, meet people, and share your tips!