The operator Expeditions’ next X-BOW® expedition cruise ship will be named ‘Sylvia Earle’, to honour the renowned marine biologist, oceanographer and explorer.

The ship is one of the vessels in owner, SunStone Ships’, INFINITY class. Constructed at CMHI, they have been designed by Ulstein Design & Solutions AS.

Sylvia Earle is ‘an accomplished marine biologist, oceanographer, conservationist and explorer; the first woman to become chief scientist of the U.S. National Oceanic and Atmospheric Administration and named by Time Magazine as its first Hero for the Planet in 1998. 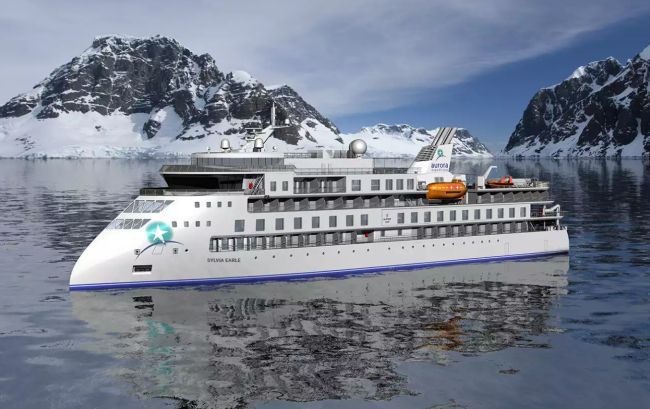 The ‘Sylvia Earle’ has been designed by Ulstein Design & Solutions AS and is one of the potentially ten vessels in SunStone Ships’ INFINITY class. The first delivery in this series, the ‘Greg Mortimer’, is also operated by Aurora Expeditions. The ULSTEIN X-BOW® hull shape has been proven in offshore vessels for more than a decade and on more than one hundred ships, however, the ‘Greg Mortimer’ was first in the cruise industry. The vessel’s naming ceremony and maiden journey in October 2019 therefore roused much attention world-wide.

About ‘Sylvia Earle’and the X-BOW®

‘The 126-passenger ship will be the second in the fleet to sail with the patented X-BOW®, whose inverted bow design, in combination with dynamic stabilisers, offers unrivalled stability and comfort on ocean crossings. The X-BOW® cuts through the swell, minimising vibrations and disturbances, and makes quicker transits through waves. This helps reduce fuel consumption.

As well as improving comfort at sea the inverted X-BOW® offers an enhanced viewing experience by bringing passengers much closer to the immediate environment than that which can be achieved on ships with a traditional, bulbous shaped bow. The X-BOW® on the ‘Sylvia Earle’ will feature a unique two-level glass atrium lounge in the bow, offering extraordinary views to the front to the ship. In Polar regions this means that passengers will be able to appreciate the majesty of an iceberg immediately as it appears on the horizon.

With the revolutionary X-BOW® technology to cross oceans more comfortably, expansive observation decks to bring you closer to the environment, inviting communal areas and unsurpassed environmental credentials, Aurora Expeditions’ ships offer the perfect base camp for adventures at the outer limits of human exploration.’

Ulstein has delivered the ship design, equipment packages and site follow-up. The series of vessels are being constructed at the CMHI yard, China, and the ‘Sylvia Earle’ is scheduled for delivery in 2021.

‘In the spirit of exploration, and as part of its commitment to responsible travel, we will continue to name its new ships after explorers who are passionate about their environmental commitment and who share the company’s vision for the future. In keeping with Sylvia’s own vision and achievements, the ‘Sylvia Earle’ will have a large focus on marine education and conservation. Aurora Expeditions ships boast the lowest polluting marine engines in the world, due to a combination of low energy consumption, high fuel-efficiency and a streamlined design. The state-of-the-art Tier 3 engine delivers an 80% reduction in emissions compared to the older Tier 1 engine and can utilise virtual anchoring to hold its position instead of dropping an anchor on the delicate sea floor. On-board desalination plants convert seawater to fresh water that is safe to drink. Ships therefore carry less fresh water on sea crossings, further reducing fuel consumption,’ states the operator.