Most of the propellers that are used in ships are fixed pitch propellers (FPP). What does this propeller term mean? Let’s understand this from a beginner’s point of view. 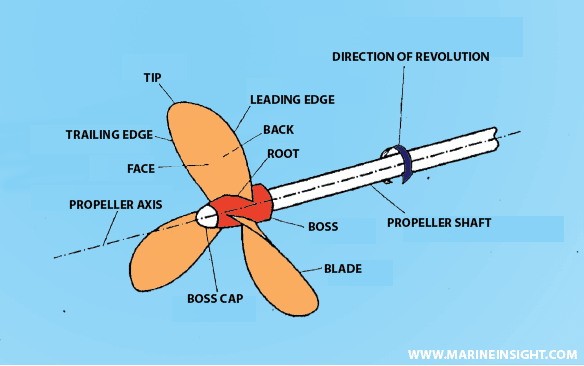 It is pretty much what you see on a screw. The angle of the thread is actually what is called the pitch angle.

The more the pitch angle, the more distance is travelled by the screw in one rotation, that is, the more is the pitch.

Similarly, propellers act on the principle of a screw. Hence the term screw propeller.

But what is a fixed pitch propeller or the FPP?

The propeller is designed in a way such that, if you cut the propeller radially at any random radius from its centre, then the cut section of the propeller blades will have a certain pitch (magnitude depends upon how twisted it is along the length of the hub).

Now if you rotate this cut section in water, the axial distance travelled in one rotation is the pitch of this section. If you vary the radius at which you cut a section, the twist of the blade also varies from the root to the tip. This makes it evident that each section of the propeller has a particular pitch. 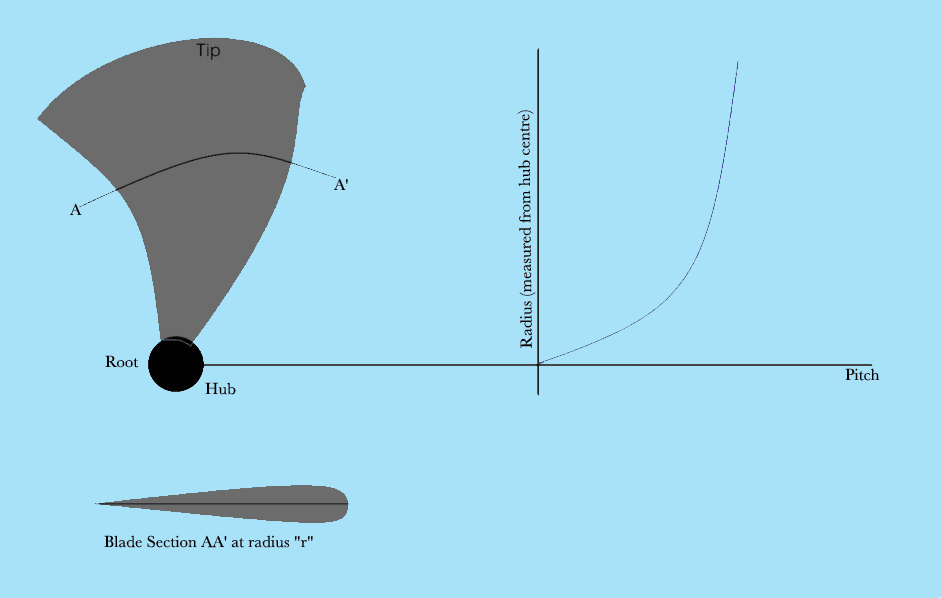 Blade section and variation of pitch with section

Note very carefully, that the pitch varies along with the blade section (or increasing distance from the propeller centre), but the net average or the net pitch of the propeller remains constant. Such a propeller is a fixed-pitch propeller.

Now, let’s go back to the concept of a screw. What if you could somehow change the angle of inclination of the threads along the screw?

If you could, what would you actually be doing is changing the pitch angle and subsequently, the pitch of the screw. This is exactly why the controllable pitch propeller was developed by the industry.

The twist (to be referred to as pitch from now on) of the root section of the blade is always with respect to the angle it makes with the propeller hub. What if we can change the angle of orientation of the root?

And since all the other blade sections had their previous pitch angle already, they attain a new pitch angle.

In other words, you are able to control the pitch of the entire propeller, by changing the orientation of the root section on the hub. This is done by the means of a hydraulic cylinder.

When the required orientation or pitch of the propeller is obtained, the blades are locked in that position.

So the blades are not an integral part of (or not casted along with) the propeller hub. They are mounted on spindles that have axes perpendicular to the shaft axis.

Advantages and Disadvantages of CPP and FPP

The following points will discuss the applications and their relations with the advantages and disadvantages of CPP and FPP systems:

However, there are many disadvantages of using a controllable pitch propeller to a fixed-pitch propeller. It is important to know them too.

To conclude, it is vital to know the applications of controllable pitch propellers. These are used in ships that are required to operate at variable speeds even when operating at constant power requirements. Such ships are tugs, trawlers, ferries, ice breakers, and small scale warships that are equipped with gas turbines.

What according to you are the most important features of CPP and FPP?