The common rail system, as the name suggest, is a system which is common for every cylinder or unit of the marine engine. Marine engines of the early times had a fuel system, wherein each unit had its own jerk pump and the oil pressure was supplied through the jerk pumps. 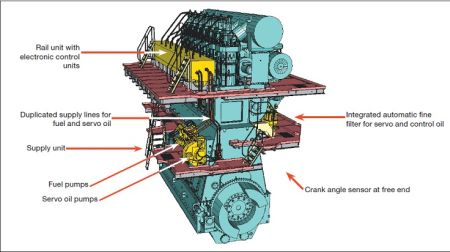 The common rail engines are also known as smokeless engines as fuel pressure required for combustion is same for all loads or rpm of the engine.

The common rail is employed in the following system:
1) for heated fuel oil at a pressure of 1000 bars.

2) for servo oil for opening and closing of exhaust valves at a pressure of 200 bars.

3) control oil for opening and closing of valve blocks at a pressure of 200 bars.

The common rail system consists of a high pressure pump which can be cam driven or electrical driven or both. Pressure requirement will be different for different system. For fuel oil the pressure are as high as 1000 bars, for servo and control oil the pressure is about 200 bars. The high pressure pumps are driven by camshaft with three lobe cams. These pumps makes several stroke with the help of three lobe cams and speed increasing speed gear.

For fuel oil and servo oil the pumps are engine driven and for control oil it is motor driven.

B is the control oil rail.

This is provided after the pumps where the accumulated pressure from the pumps is provided to the rail which supplies them to each unit when required. This is located at the engine,s top platform and just below the cylinder cover. These rail units extends to full length of the engine. These are enclosed in the case and have access from the top for maintenance and overhauls.

This is required for the control of the flow of the fuel oil, servo oil, control oil and starting air from the rail to the cylinder. The valve block is operated by the electronic control which operates when it gets a signal indicating that this cylinder is at top dead centre (TDC) and fuel has to be injected and decides when exhaust valve has to be opened. With the help of electronics the injection can be controlled remotely from the computer. For e.g. if we want to cut off fuel to one of the unit, then we need to cut off the signal given from the control system so that the valve will not open.

The fuel oil system this block is known as ICU( Injection control Unit) and for exhaust valve it is known as VCU (Valve Control Unit). The control system for opening and closing of ICU and VCU is done by electro hydraulic control with which when the signal for open is present the valve for control oil opens and control oil pushes the valve of ICU and VCU to open. The signal for electronic control is given by crank angle sensor which senses about each cylinder and sends signal to system which decides whether to open a valve or close the valve.

The timing of the opening of the valve can also be controlled by the electronics, which means that if the signal is given to open the valve early it will open early and vice versa.

The following are the advantages of the common rail system:

1) Same injection pressure for the engine at all loads or rpm which is not possible in jerk pumps as the later is dependent on the engine speed.

2) Injection timing can be varied during running of the engine, whereas in conventional system the engine has to be stopped and setting for timing has to be changed.

3) The design of common rail is simple as there are no individual fuel pumps and cams for each fuel pump are also removed.

5) Reduced maintenance is required because of less number of pumps and increased efficient combustion time between overhauls.

6) With this system control of variable opening of exhaust valve can also be done which is not there in traditional system.

Manual of RtFlex engine By Wartsila