You are here: Home › Life At Sea › 7 Most Common Superstitions of Seafarers
TwitterFacebookLinkedInPinterestBuffer

Superstitions and beliefs are entwined into the very fabric of human existence. Be it any sphere of life, there is a small element of odd and uncanny belief that dictates it. Even in an age where information flows across space (as well as outer space) without barriers, the aspect of adherence to an age-old belief goes on to show that we are tuned to be attracted to that which is mysterious.

In a field such as the merchant navy, which is perhaps almost as old as mankind itself, it is only natural that there exists myriad superstitions that are promulgated to this day. Come to think of it, being away from civilization and an inclusive everyday society gives rise to a support system that’ll cater to the most mundane of thoughts. It is a debatable topic as to the whether the supernatural exists or not. Most will agree to the fact that there is a constant presence of a higher power, cosmic or whatever one may choose to call it. But to what extent are those ideas believable?

Let us look at some of the common seafaring superstitions that are prevalent:

1. Having a woman onboard is bad luck: Despite the age-old association of sailors with women, this superstition has been central to seafaring for a very long time. Legend has it that having a woman onboard meant distractions and aroused jealousy among sailors. This would deviate them from their work and hence result in getting the sea angry! (The term ‘son of a gun’ arose from here. In the presence of a woman, when immense desire struck before reaching port, a sailor consummated that affair on the gun deck). Even in popular culture, we have read and heard of mermaids distracting vulnerable sailors into the dark corners of the ocean with their beauty and eventually devouring them. On the contrary though, naked women are said to be a calming element for the sea; which is why old ships have naked women for figureheads.

It is indeed an irony though then that a ship is referred to as ‘she’. This superstition clearly wouldn’t make sense today, for there a lot of women all across the community who are excellent seafarers and have navigated their respective ships with finesse and without bringing bad luck to the ship or the crew!

2. Ceremonial ship launching and naming: Ship naming is a ceremony that happens after a vessel has been built, passed the necessary sea trials and is ready to set sail. The tradition of christening a ship for good luck and safe voyages goes back a long time. Historical evidence shows Babylonians celebrating the launch of a ship as early as 3rd millennium BC. They are said to have been in the practice of sacrificing an ox for this purpose! The Egyptians, Greeks and the Romans called upon their respective Gods to protect their ships and crew. The Greeks believed in Poseidon and the Romans invoked the blessings of Neptune. In the 8th and 11th century AD, the Vikings continued the tradition by spilling blood as an offering to appease the Gods. Gradually, blood gave into wine and as we see in modern day practice, the culture of cracking open a bottle of champagne emerged. Also, modern day practice involves a woman christening the ship to bring good luck and prosperity for the vessel. 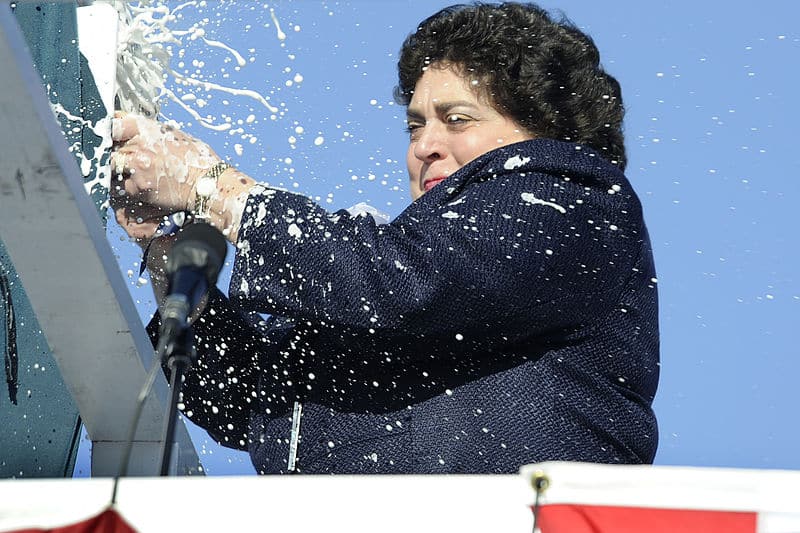 3. Unlucky Friday: In the past, Friday was considered to be an unlucky day to start a seafaring venture and meant that the voyage would be ultimately unsuccessful. Imagine applying the rule to modern day navigation! Business would be hampered and ship owners would be aghast at the prospect of the ship being halted just because it’s a Friday! This belief is said to have emerged from the fact that Christ was crucified on a Friday and hence a ship beginning a voyage on that very day would be a bad omen. Working on the same lines, Sunday was considered to be an August day to begin for Christ was resurrected on a Sunday. Again, baseless conjecture that would cause a great deal of loss if they were to be applied today.

5. Ghost on Ship: Every seaman has also heard stories of ghosts and paranormal activities haunting ships, especially after an unfortunate event has occurred on board. Many believe that spirits of those who have lost their lives on ships remain there for a long time. Many even make stories of their unusual experiences with ghosts and why they fear going to a particular area on the ship. In case series of accidents or mishaps have taken place on board, it is said that the ship is cursed and the blame is put on the spirits that are haunting the ship.

Ghost stories are still popular among seafarers around the world. Though most of them are nothing more than fiction, many seafarers admit to have seen, experienced and even clicked them on board.

6. No Bananas On Board : This might sound weird on today’s modern ships where bananas are served almost regularly for breakfast. However, during the 1700s, bananas were considered bad luck for ships as it was observed that most of the ships carrying cargo of bananas disappeared at the sea and never made it to their destinations. Another explanation is that bananas carried on board ships fermented quickly and released toxic gases, which would kill sailors on board. Yet another theory says that a peculiar species of poisonous spider used to hide in the bunches of bananas and many crewmen died from their bites, reinforcing the superstition that bananas on board ships were a bad omen.

7. Forbidden Words: From the early days of shipping, many words have been banned from using on ships. Some words such as “good bye” and “drowned” were prohibited to ensure safe return of the ship and it’s crew. Another weird theory was that people on board were not allowed to speak the word “good luck” as it was considered to bring bad luck. In case someone said “good luck”, the only way to reverse the unfortunate was to draw blood by delivering a swift punch.

Much like a Grandmother’s eloquent warning, most of these superstitions are age old adages that came about when science and technology were mostly obscure in nature. Navigation was an individual skill that a few good men possessed and honed over time. However, as is with any other traditional line of speculation, some of these ideas continue to exist and followed in a very miniscule way, mostly as just a faint reminder of a romanticised era of shipping. Popular culture has given rise to widespread interest in this aspect of seafaring and a mythical approach to seafaring; more as a fairy tale and less as a branch of core science and skill. As a sailor, one will always know that these superstitions are mostly bogus nowadays and the merchant navy would collapse under the burden of such ridiculous logic. However, as dinner table talk, these vague beliefs is what keeps the conversation funny and interesting; something that is required daily in the monotonous and tough life of a seafarer.

Some interesting posts on seafaring superstitions:

Superstitions of the Sea (book)