You are here: Home › Guidelines › Types of Life-Saving Equipment Onboard Ships
TwitterFacebookLinkedInPinterestBuffer

What happens when you are met with an accident on land? Rescue work begins in a couple of minutes (or hours depending on where you are) and soon experienced professionals will be rescuing and assisting you for further treatment.

But what if an accident occurs at sea? What is a cruise ship is in a distressing situation?

We’re talking about 6680 people on board (not to forget a 2200 people crew which equals to a total of around 8800, approx. 9000 people!) a cruise ship now (Let’s say onboard Symphony of the Seas- the world’s largest cruise liner or we all remember Costa Concordia, right?).

How do authorities even allow for such vessels to operate in notorious ocean waters where the waves and weather conditions are highly unpredictable? Does the ship have certain means to save lives in event of a disaster by the time they are aided by a rescue team?

Apart from the stringent rules and regulations followed during ship design and construction, it is mandatory to carry onboard certain life-saving equipment and appliances, which are helpful in saving the lives of people in the event of a disaster.

It depends on the ship type, number of passengers (and crew) on board and the requirement pertaining to safety regulations that determine the type and quantity of life-saving equipment available.

Listed below are the main life-saving equipment used for evacuating and saving lives of people when a ship is under distress.

These are the primary life-saving equipment used when the crew and passengers are supposed to ‘abandon’ the ship and need out of water support. They must be available in sufficient quantity and support the required capacity and size such that the total number of persons on board can be evacuated from either port or starboard. ( This is done so that in case the ship is capsizing to one side, say port, the lifeboats can be lowered from the starboard side and everyone on board can be saved.)

In small vessels, such as harbour and river crafts open lifeboats and semi-enclosed lifeboats are used.

For all large vessels plying in oceans totally enclosed lifeboats are provided. This is done to ensure better protection against the weather and sea. They are fitted with small diesel engines for self-propulsion at a speed of around 6 knots and carry fuel for 24 hours of operation.

IMO adopted Resolution MSC.402(96) highlighting the necessary requirements for the maintenance, repair, overhaul and thorough examination of lifeboats along with testing of their release gear.

Moreover, following items ought to be thoroughly inspected wherever fitted and checked for satisfactory condition and operation-

Types of lifeboats used on ships

Measures to stop accidents on lifeboats

These are the secondary means of life-saving equipment on ship. Inflation of life rafts is done with carbon dioxide from the storage cylinder packed within the raft inside a container.

They may be launched via davits, cradles or free-fall racks (Davit launched rafts are launched usually from a single davit). They are first inflated on-board, boarded and then lowered into the water. 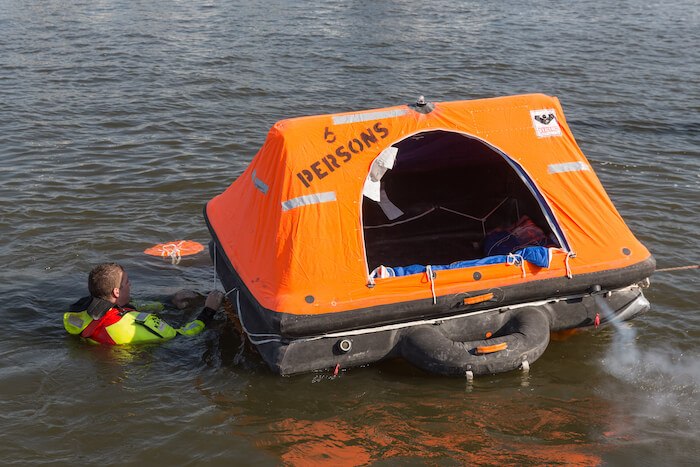 To read more about each of these tests refer to Resolution MSC.81(70) Part 1-5

They are buoyant, rigid and ‘non-inflatable’ platforms with a similar function as life rafts but having downside of occupying more deck space. They are also subjected to various tests like material test, buoyancy test etc. to assess their reliability.

These are small, lightweight boats designed with the objective of rescuing people in distress and towing the survival crafts (such as life rafts and buoyant apparatus). They are designed as such to be launched in minutes and must remain stable when recovering a person in the water from either side of the boat. They are usually davit launched and come in different shapes and sizes.

The material used for construction is usually fibreglass with the addition of inflated rubber buoyancy chambers for extra stability. 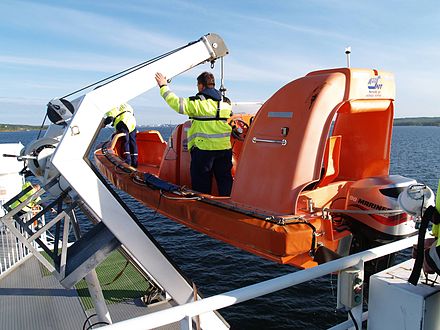 To read in detail about these tests refer to Resolution MSC.81(70) Part 1-7

A Guide to Different Types of Boats

Like rescue boats, personal floatation devices also come in a variety of shapes, sizes and designs. They may be either of solid buoyancy type with closed-cell foam or may be inflatable.

Inflation can be done either orally or carbon dioxide cartridge or combination of both. (We’ve all seen such life jackets present under the seats of every commercial airliner).

Life Jackets are fitted with whistles to grab the attention of rescue people as well as a light which illuminates as soon as it touches the water to help in easy spotting people in distress. Alternatively, a chemical light stick and a reflective material may be used. 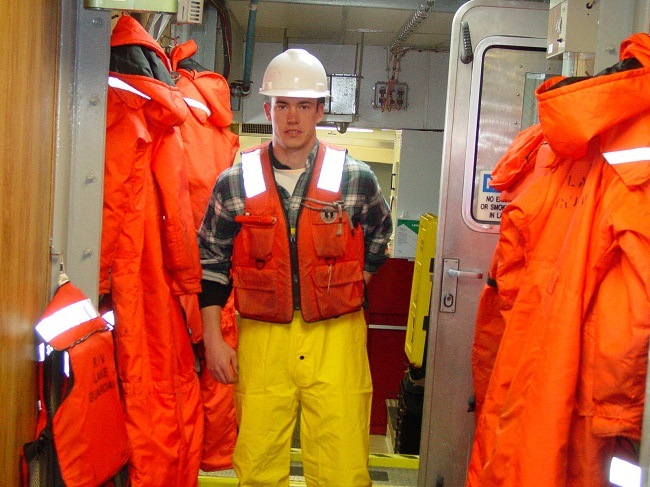 These are the common life-saving equipment present in all small and large vessels (You may have spotted them even on the sides of swimming pools). They are fitted around the perimeter of ship’s weather deck and are meant to be thrown rapidly to a person overboard.

A man overboard is a common occurrence and these buoys provide the fastest aid for floatation in such a case.

The following table states the minimum number of lifebuoys (based on ship’s length) in accordance with SOLAS requirements.

The SOLAS requirements necessitate the below specifications ( for each lifebuoy)

To read more about each of these tests refer to Resolution MSC.81(70) Part 1-1

Why did people die despite wearing life jackets after the Titanic sank? The answer is hypothermia.

Well, that’s where the survival suits become increasingly important. They are also called immersion suits and are used as protection overalls.

Their main function is to reduce the body-heat loss of a person in cold water and hence prevent death due to hypothermia.

Typical designs allow the body temperature to prevent falling below 35 degree Celsius for six hours for a person in the water at 0 degrees Celsius.

Some of the important requirements highlighted in SOLAS Chap.III/32 is

When we have around 8800 people on board, it becomes a mammoth (and very important) task to communicate and alert each and every passenger and crew members of the situation and dictate the necessary steps and instructions to be followed.

Any miscommunication or lack of communication can have disastrous ramifications. Hence these systems also form a part of life-saving equipment. All ships are fitted with general alarm systems so as to alert and summon the crew to their fire stations or boat stations.

Passenger vessels are to be equipped with public address systems. Communication systems also include Portable Very High Frequency (VHF) Radios (commonly referred to as walkie-talkies) and are provided for emergency crew communications.

How does a rescue ship reach the exact location of a disaster? It’s quite obvious it cannot be done visually as the distances are too large for visual navigation. Then how does the rescue team reach the exact site of the disaster? 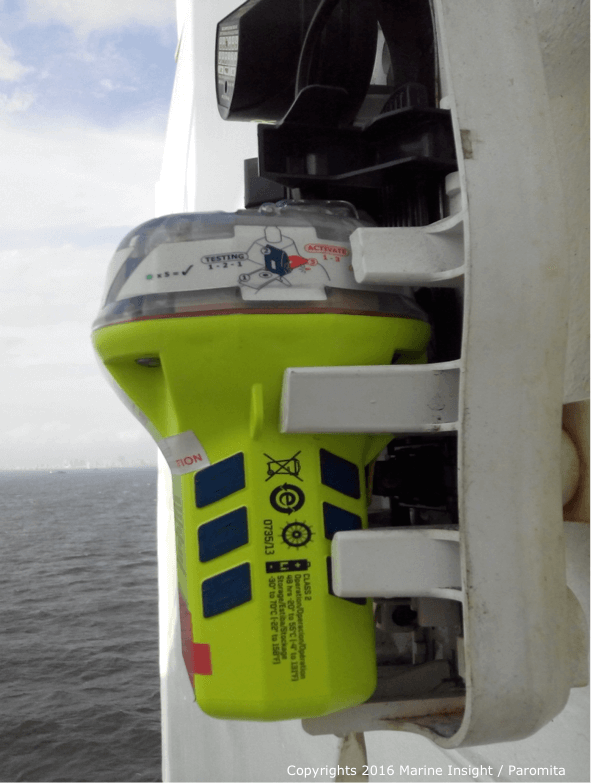 This happens with the aid of geographic co-ordinates sent via radio signals to a satellite receiver by EPIRB so that rescue efforts can be initiated at the earliest at the exact location of the disaster. These are buoyant electronic devices which float on water when a ship sinks and begin transmitting radio signals with geographic coordinates.

To know about the general requirements, distress function etc. of EPIRB click the below link referring to Resolution A.810(19)

If you’ve watched the movie Titanic you must’ve seen the crew sending distress signals with the use of flares. Distress Signals are typically parachute flares which can be spotted by nearby vessels and rescue personnel and determine the location of the ship in distress. 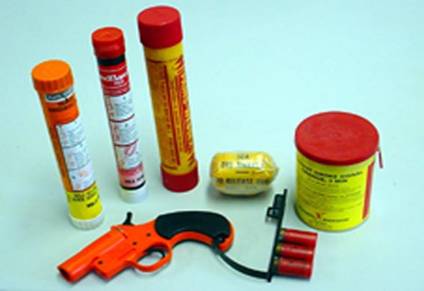 3 rockets should be fired(vertically). It must be ensured that the parachute flare’s ejection happens after a height of 300 m. Also, the rate of descent should not exceed 5m/s and shall sustain burning for at least 40 seconds. They should also function efficiently when projected at an angle of 45 degrees to the horizontal.

In case the rocket is handheld, its recoil should be minimum

It should be established by laboratory tests that the average luminous intensity of flame material (which should burn uniformly) must be a minimum of 30,000 cd with the colour being vivid red.

Requirements Regarding PyroTechnics Put Forth by SOLAS 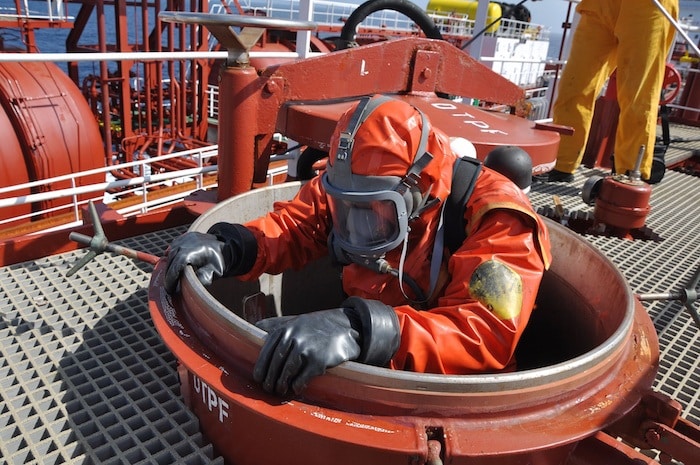 No doubt the person will soon suffer asphyxiation which may lead to unconsciousness and ultimately death. To prevent such a mishap self-contained breathing apparatus are used by personnel entering a closed compartment infiltrated with toxic gases so as to facilitate oxygen supply in that hazardous environment.

These were important life-saving equipment which allows to save the lives of crew and passengers in case of an accident and make a ship safe from the point of view of safety of people.

A ship sailing in the middle of the ocean has to be self-sustainable by all means as external aid might take hours to reach the designated site. And when we talk about self-sustainability, safety becomes one of the primary areas of concern.

Which are other important life saving equipment which you think must be added to this list?

A Guide To Verified Gross Mass (VGM) For Shipping

Reasons for Cylinder Liner Wear and Ways to Measure it

Important Points For Logbook Keeping On Ships – Part 1
Want to share your tips and advice? Got questions? Visit the community forum to ask questions, get answers, meet people, and share your tips!