When it comes to constructing near self-sustained floating vessels, there comes a number of regulations to be followed so as to maintain the structural integrity and safety of the vessel while sailing in the ocean waters.

The ship should be safe during the entire period of her service along with routine maintenance in place. These regulations which have been framed after careful scrutinization and the lessons learnt from past incidents lay the stepping stone towards safety during the crucial phase of ship construction and in effect during the entire service life.

In its 87th session, IMO’s Maritime Safety Committee (MSC) adopted Goal-Based Standards (GBS) and guidelines (which deal with bulk carriers and oil tankers) that gave the organisation a role to frame rules in accordance to SOLAS requirements.

The process consists of an internal and external audit wherein the design and construction rules should correspond to the adopted Goal-Based Standards (GBS).

In this article, we’ve outlined 10 important regulations to be followed during ship construction.

The first 7 regulations correspond to bulk carriers and oil tankers and the rest for liquified chemical tankers in bulk. 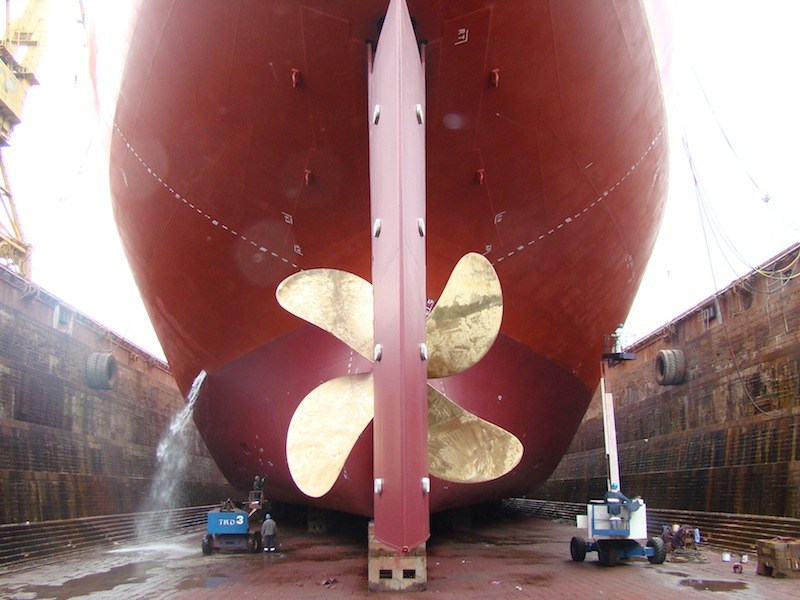 Since surveying and approval is an important part of the ship construction process, all workmanship should be of commercial marine quality. The welding requirements are dealt with in Ch 12 Sec 2.

Any defect arising during the construction process must be rectified to the satisfaction of the surveyor before covering it with paint, cement or any other composition. This is done to prevent any catastrophic failure in later stages.

IACS Recommendation 47 Part A deals with Shipbuilding and remedial quality standard for New Construction and in its accordance, the structural fabrication is to be carried out. The standard used for fabrication/construction should be intimated to the attending representative of the approving classification society beforehand.

Part 1.2.3 of this chapter outlines the necessary information to be present in order to determine the range and tolerance limits for the listed items such as cut edges, pillars, brackets, plate assembly etc.

The general idea behind this rule is that the free edges (cut surfaces) of cut-outs, hatch corners etc. should be free from notches and must be properly prepared.

As a general rule cutting draglines etc. are to be smoothly ground. All edges are to be broken or in cases of highly stressed parts be rounded off so as to minimise stress concentration and hence any possible failure.

Similarly, free edges on flame or machine-cut plates or flanges are not to be sharp-cornered. Corners should be machine cut for precision in the hatch opening.

The hull girder is subjected to high stresses and for components where notch toughness is a matter of concern the inside bending radius (in cold-formed plating) should not be less than 10 times the as-built plate thickness for carbon-manganese steels.

b. Corrugated bulkheads and hopper knuckles

The inside bending radius (in cold-formed plating) for corrugated bulkheads and hopper knuckles should not be less than 4.5 times the as-built plate thickness for carbon-manganese steels.

Post heating during forming and stress relieving, it has to be shown that the mechanical properties exhibited by the material meet the requirements specified by a procedure test using a representative material.

Curve forming or fairing (by linear or spot heating) has to be carried out using approved procedures. This is done so as to ensure the material properties are not adversely affected. The heating temperature on the surface is to be controlled as it should not exceed the maximum allowable limit applicable to that plate grade.

Post welding- straightening and aligning are to be carried out carefully so as not to alter the material properties significantly. The society may require a procedure or working test to settle any disparity arising during the process.

b) Structural members need to be aligned following the provisions of IACS Recommendation No. 47, Tables 7 or according to any other recognised fabrication standard accepted by the society. For critical components its imperative to make control drillings where necessary which are welded up again on completion.

These were some of the important regulations for bulk carriers and oil tankers.

The following three regulations have been taken from The Lloyd Register’s Rules and Regulations for the Construction and Classification of Ships for the carriage of Liquid Chemicals in Bulk.

8. Materials of construction and welding

Structural materials used for tank construction, together with associated piping, pumps, valves, vents and their jointing materials, shall be suitable at the temperature and pressure for the cargo to be carried in accordance with recognized standards.

Steel is assumed to be the normal material of construction.

As the shipyard is responsible for providing compatibility information to the ship operator, it must be done timely prior to the delivery of the ship or on completion of a relevant modification of the material of construction.

This is the most important regulation as per my view for liquid chemical tankers in bulk as a fire on board such a vessel can be extremely catastrophic and devastating.

The requirements for tankers in SOLAS Chapter II-2-Construction-Fire protection, fire detection and fire extinction shall apply to ships covered by the Code, irrespective of their tonnage.

This includes ships of less than 500 tons gross tonnage with a few exceptions which can be referred from Lloyd Register’s –The Rules and Regulations for the Construction and Classification of Liquid Chemicals in Bulk.

Ship construction is a meticulous process as minute defects can result in catastrophic failures during service. Scepticism points out that steel used in the construction of Titanic was not up to the mark and hence the hull suffered severe damage on collision with an iceberg due to poor visibility.

The result – one of the most horrifying disasters in international cruising that paved the way for the foundation of International Convention for the Safety of Life at Sea (SOLAS) in 1914 with a hope that ships henceforth will have better safety procedures and construction.

As a result, everyone involved with the ship construction process from the workforce to the surveyors to any other concerned department must be punctilious throughout the entire construction phase as this phase is the backbone on which the safety of any ship relies.

Hence, it becomes imperative that regulations which have been framed after much scrutinization and careful observation be observed properly and implemented in place. The last thing one wants is a lawsuit filed against them due to overlooking such crucial regulations in this highly competitive shipping market carrying about 90% of the world trade!

These are the 10 important regulations regarding ship construction which need to be followed. There are numerous other regulations that ensure the vessel returns from its voyage in its full glory but have not been covered due to the scope of the article.

A ship properly constructed following the important regulations need not undergo any major outfit until any further amendment of rules and hence can sail smoothly during its entire service life safely without any legal or safety concerns.

Intact Statical Transverse Stability Of Displacement Vessels
What are Keel Guards?
Want to share your tips and advice? Got questions? Visit the community forum to ask questions, get answers, meet people, and share your tips!