From the time that ships started sailing, flags were in place as a mode of communication or expression of intent. Traditionally speaking, flags have always formed an integral part of shipping but the necessity and extent of usage have obviously reduced over time owing to advancements in technology.

However, much like other so-called ‘arts’ pertaining to the shipping industry, flag etiquette have stood the test of time and if not extensively, flags are still displayed when absolutely important (e.g, entering a port). The order of importance, points and honour of the flags have long been established and are a tradition albeit with new designs and meaning in some cases. 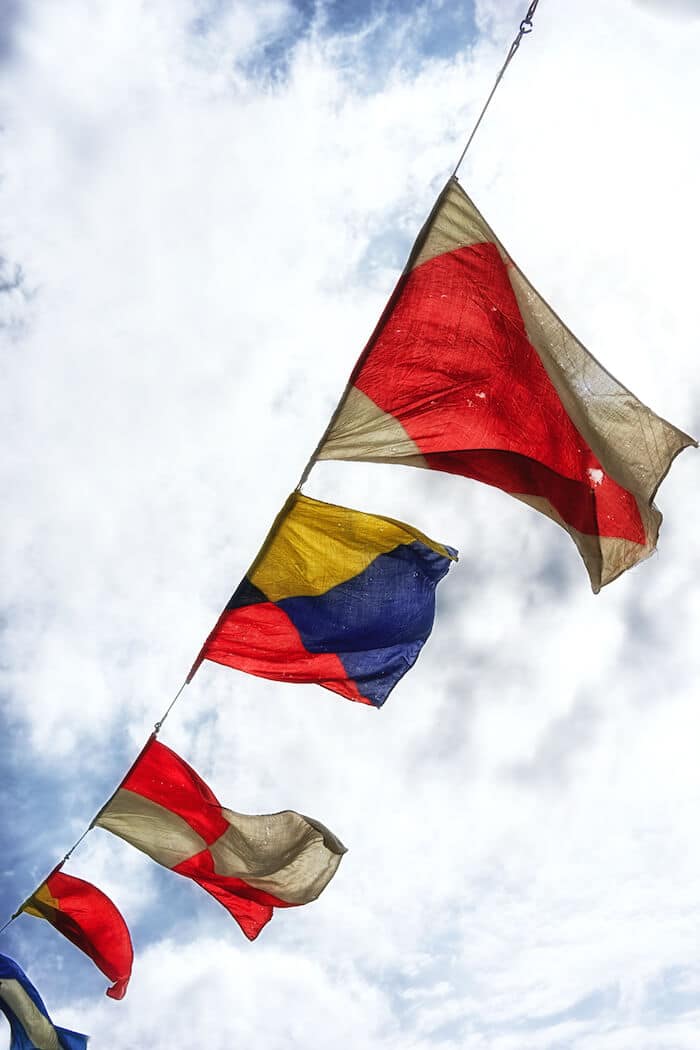 Flag related terms are of the old school and may cause some difficulty for candidates appearing for competitive examination! While the INTERCO meaning of single letter flags is easily grasped, the terminology is something that requires basic understanding.

There is some confusion with regard to this (much like underway and making way!)- vessels wear flags; people fly flags on their vessels. Each flag has a specific meaning along with the appropriate location for it to be worn and the time that it can be flown. Next up will be the order of the points of honour signifying the order of preference, i.e., the highest in the points of honour will fly the most important flag (which is basically your own ensign) 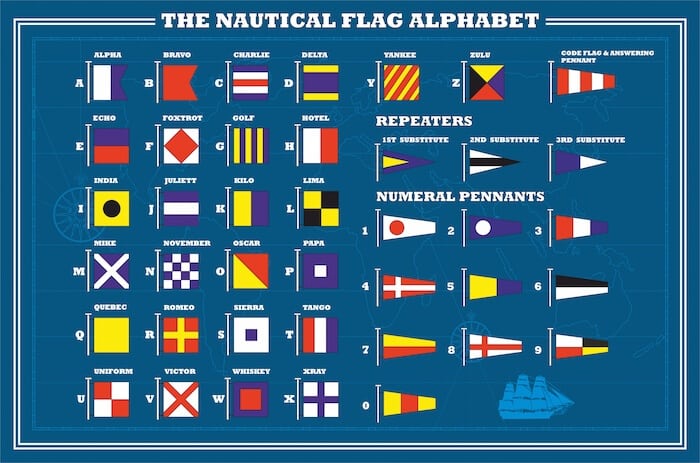 How to Read Flags

In order of preference:

Fly the flag at the highest point of honour to which that particular flag is entitled. The highest place is always given to your own national ensign. All other flags must be placed below.

The gaff holds the highest importance. Second to that is the stern flagstaff (more common for the ensign in modern merchant vessels). So there might be a confusion with regard to ‘height’ being a factor seeing as the stern staff is much lower; although another flag might appear higher, no flag is ever flown above the national ensign on the same halyard. Gaff is used for holding the ensign flag when the ship is underway. Ensign on the gaff and Jack on the jack staff do not go together

Instances when Ensign is flown

It is a custom among merchant ships when entering or leaving a foreign port and during their stay in the port to fly the colours of that country. as a mark of respect; the exact details of flying such a flag with regard to timings can be obtained from the port control. The dimensions of the national ensign must always be larger than the courtesy. Also, never fly one country’s flag beneath another’s on the same mast. This is a sign of conquest and projects disrespect, ignorance and bad seamanship. Also, do not hoist the courtesy flag upside down. As mentioned, follow the port country’s rules with respect to the courtesy; some countries might have a rule wherein to fly the courtesy only after the Q (quarantine) flag has been secured. The courtesy flag comes second in order of preference after the national ensign.

As per INTERCO, the Q flag denotes “My vessel is healthy. I require free pratique”. It is a flag that is hoisted inevitably by all vessels prior to entering the port to denote that the vessel is healthy and disease free and requests clearance. Preferably, fly it on the starboard yardarm and take it down after the vessel has been cleared by the health authorities of that country.

The national ensign or the courtesy should not be flown from sunset to 0800 hours unless specifically mentioned to do so (Mexico requires their flag to be flown after sunset as well). At 0800 when raising the flags, the national ensign should be raised first followed by the courtesy and the rest. The reverse order is applicable during lowering.

Commonly flown by merchant ships to denote that the ship is about to sail and that all crew who may be out of the ship to return back to the ship immediately. 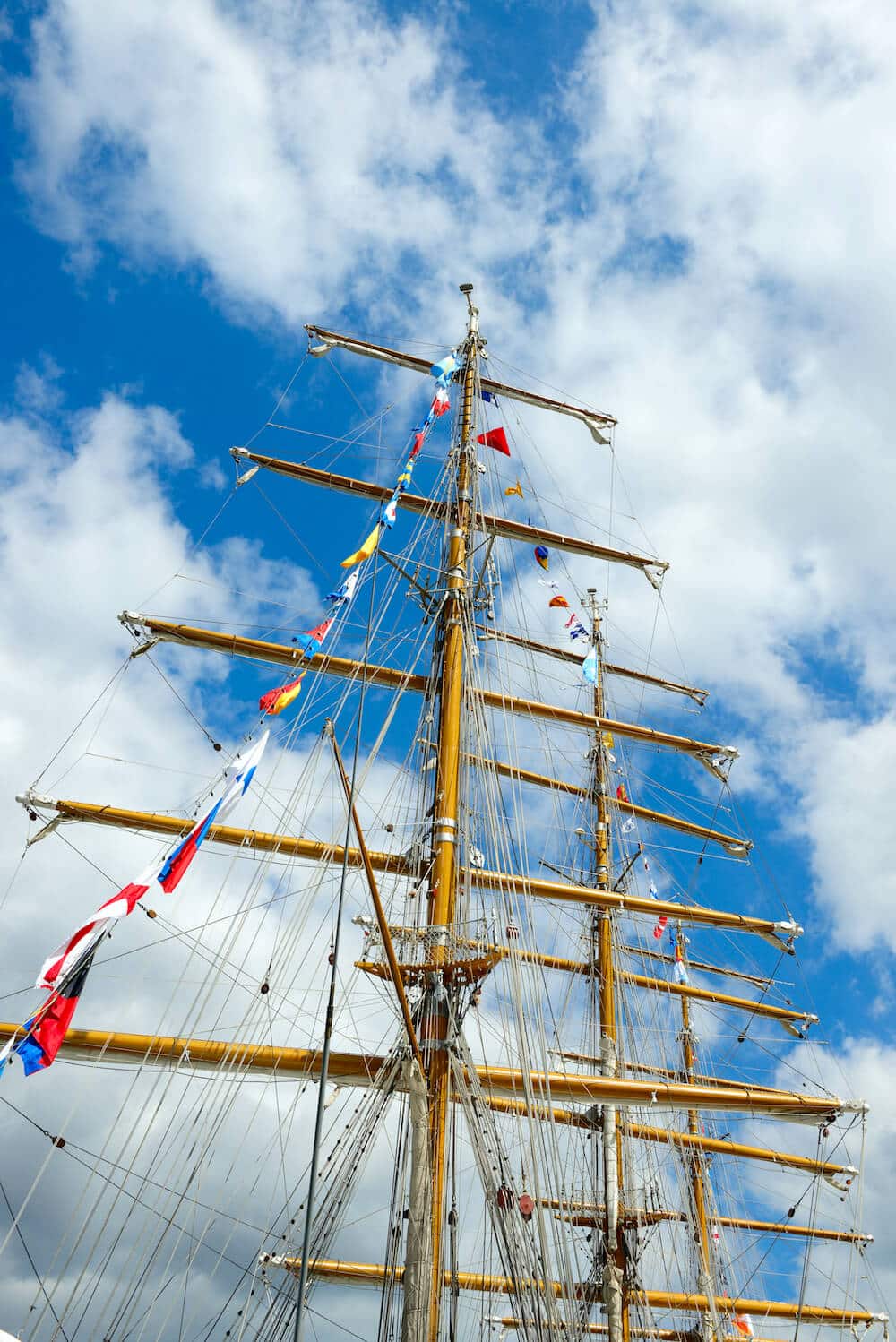 The concept of half mast is to denote respect. Flags are flown at half mast when saluting another vessel (naval vessels of war). The Naval ship reciprocates by lowering and raising their national ensign after which the own ensign is returned to full hoist.

Also, the Ensign is worn at half mast to indicate death. Usually on the day of the funeral only and from the time the body of the deceased leaves the ship or place where it has been lying until the time when it is buried

On special occasions such as Republic Day, Independence Day and the likes, ships or other vessels may dress their ships in full regal splendour. This includes displaying a set of 40 flags representing numbers, letters and other signals. A vessel is dressed only while not underway. This might also be done for a special time such as her maiden or final voyage.

INTERCO refers to the International Code of Signals.  It is an international system of signals and codes for use by vessels to communicate important messages regarding safety of navigation and related matters. Signals can be sent by flag hoist, ALDIS lamp, semaphore, radiotelegraphy, and radiotelephony. To make sense of the above, it is important to know the INTERCO (at least the single letters) for the purpose of the oral examinations as well as a matter of interest as a sailor.  It contains 14 chapters, complement tables for the general section, complement tables for the medical section appendices. This code provides a means of communication seeing as there might be language difficulties among stations which affect the safety of the ship and the personnel. INTERCO contains single letter signals (A to Z) which are urgent, important and of very common use; two letter signals (AA to ZZ) for vocabulary; three letter signals (MAA-MVU) containing medical signals.

The single letter signals are used regularly and meanings of all must be known. They’re used in COLREGS (flags for vessels engaged in fishing have a separate Annex attached to it namely flags Z, G, P, T) as well as for emergency situations where communication might be urgent such as man overboard (O), when dragging anchor or when another vessel is dragging anchor onto the own ship etc. Two letter signals also have immense importance as with the NC flag (Distress flag as per Annex 4 of COLREGS) and YG (for TSS).

3 red and 2 white stripe vertically placed at hoist and at fly. Various uses of answering pendants by hoisting are:

In certain circumstances, it is necessary to take special measures to examine ship’s desire to enter a port and to control the entry. Generally, it is enforced when the security of the port is threatened or expected to be threatened. Examination vessel flag is a blue rectangular flag with two rectangles in the centre. Vessels authorised to display the examination flags are examination vessel, traffic control vessel and pilot launch when assigned to examination duty

Flags when entering a port

This has become a common question across Indian MMDs for the Second Mate oral examinations and therefore included in the article.

These are age old techniques and are here to stay. There is far too much information with respect to flags which cannot be covered under one article and it is advised to go through the INTERCO publication for a better understanding.

With the reasons for hoisting a certain flag at a certain point on the ship made easier and comprehensible, the next time a flag is hoisted should seem more interesting.

10 Points to Ensure Safe And Smooth Sea Trials Of Ships

How and Why to Take Manual Sounding On Ship?

Converting Seawater to Freshwater on a Ship: Fresh Water Generator Explained
Want to share your tips and advice? Got questions? Visit the community forum to ask questions, get answers, meet people, and share your tips!