With the stringent sulphur regulation coming into action in 2020, ships with LNG fuels can be seen playing in the international waters.

Different types of ships, including cruise and containers ships, are fitted with engines which can burn LNG fuel to reduce harmful emissions from the exhaust of the ship.

LNG fuel is different in properties when compared to conventional heavy fuel oil or LSFO used on ships. Due to its cryogenic temperatures where it can be stored and transferred, the procedure for transferring the fuel into the ships requires a more safe approach when compared to other fuel oils.

For LNG fuel bunkering, it is important to follow regulations laid down by local port authorities and permissions need to be taken from them. IMO IGC code needs to be followed by the bunker ship which will carry the fuel and would be transferring it to the cargo or passenger ship. For the ship which will be receiving the LNG bunker fuel, it will follow the IMO IGF Interim guidelines. 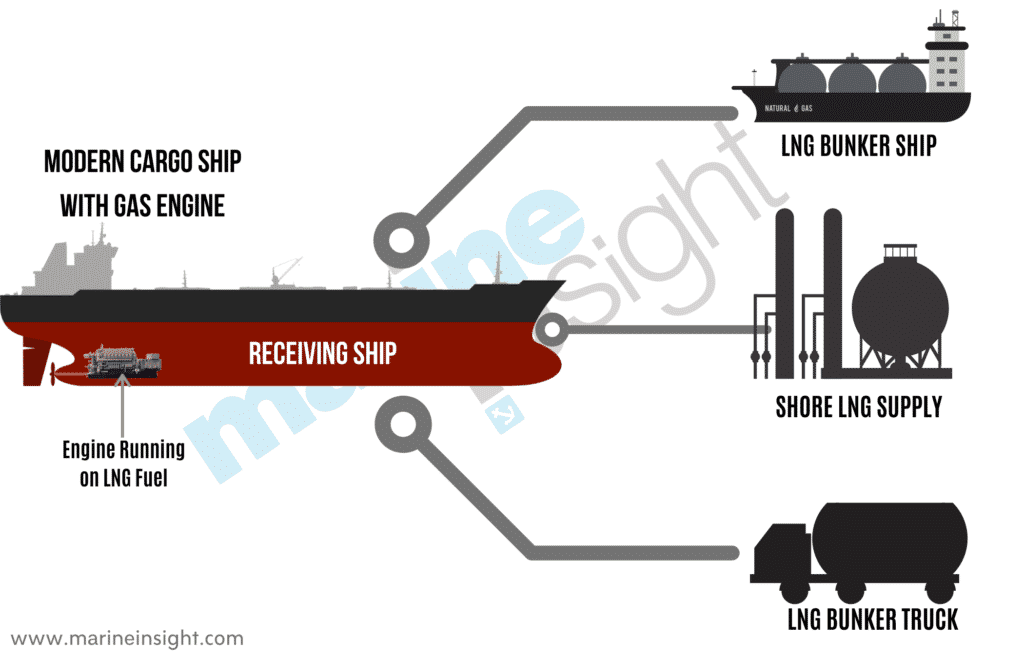 The LNG bunkering operation comes with its own set of issue and hazards such as:

Leaks and accidental spills: Like any other fuel used on board ship, the chances of leakage and spillage of LNG will be there as it will be transferred from ship to ship or shore to ship using portable pipes and connections which may get loose, break or rupture.

Cryogenic hazards: LNG as a fuel will be carried and transferred at a very low temperature of – 162 deg C. and in case of any leakage and human contact, it will lead to frostbite and cryogenic burns to human skin.

LNG fire and explosion hazards: LNG is carried liquid state so that it can be carried in the maximum quantity, and it can only be ignited in a gaseous state when the concentration of natural gas vapour is within its flammable range. LNG fuel is associated with following fire hazards-

Rapid Phase Transition (RPT) – When the LNG comes in contact with another source leading to heat transfer, which may lead to a phase transition from liquid to vapour at a faster rate.

Bunker Line Contamination: The bunker lines are opened to the atmosphere and if it contains moisture, salt or CO2, during the bunkering operation they will be rapidly cooled down and form ice which will block the pipe passage.

Trapped LNG: Once the bunkering is finished, it is possible that some amount of LNG fuel is left in the pipe which will convert and expand into vapour which will create high pressure inside the pipe leading to rupture

Rollover: The rollover occurs due to rapid release of LNG vapours from a storage tank caused by stratification which arises when two separate layers of different densities of LNG is present in the tank as there can be temperature difference in the tank surface from top to bottom. 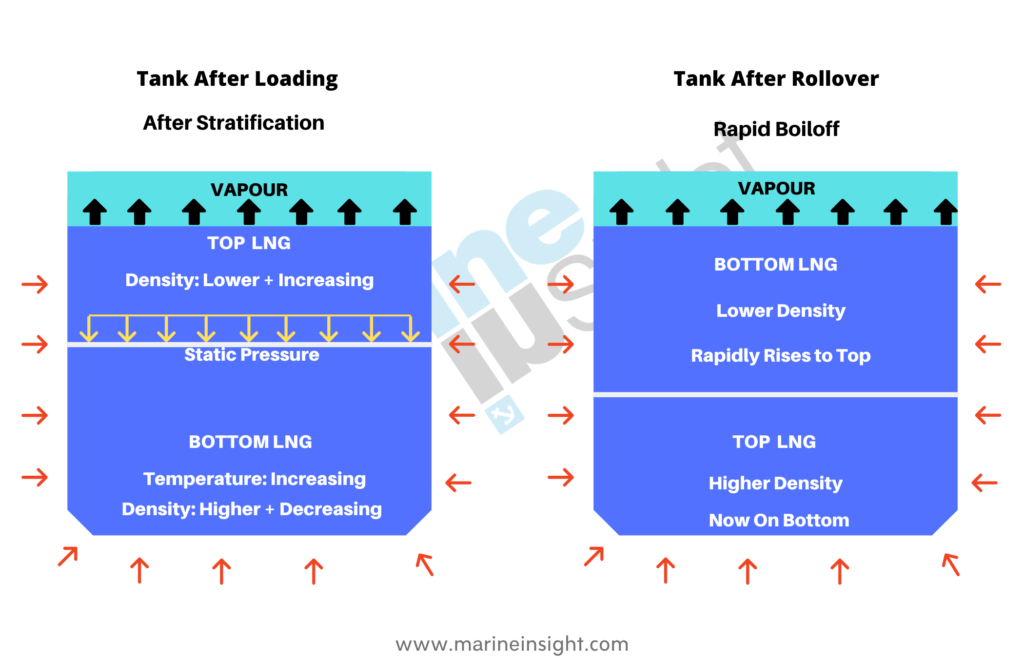 Lack of Oxygen deficiency: If LNG is spilt in confined space, it may lead to oxygen depletion as it will vapourize and displace the air present in the atmosphere in that chamber.

Hence, the ship’s crew handling the LNG bunkering operation must be aware of different hazards related to it and must have detailed instructions in terms of training and checklists for the procedure which must include the responsibility of each crew in case any of it takes place.

These instructions must be kept or displayed such a way that they are readily available at all times and crew must make themselves familiar with its content.

The emergency shutdown device or switch must be present in both the ships (bunker ship and receiving ship) and the crew must operate/ use it when:

When there is any of the hazard taking place explained above

The LNG bunkering between ship to ship or shore to ship is done by using a QC/DC coupling.

QCDC stands for “quick connect disconnect”. The coupling used in the LNG bunker hose us usually a drybreak coupling which comprises a female (hose end) fitting and a male (tanker fitting) that are connected/disconnected on a regular basis to form a liquid and pressure-tight coupling.

Daybreak couplings generally have a valve arrangement that shuts down the liquid flow prior to the disconnection of the male and female couplings. Hence,  the coupling can not be disconnected while underflow condition. 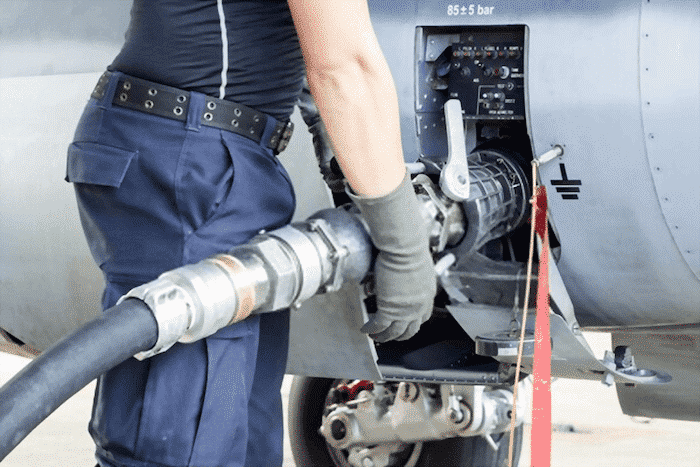 Another advantage of QCDC is that its fast connect/disconnect time allowing the crew to have a  faster operation. Low-pressure drop in the pipeline through the coupling allows faster filling.

A nominal size couplings of up to 6 works for flows up to 650 m3/h, with a maximum flow rate of 10 m/s.  The LNG bunker hoses are to be clearly colour-marked according to a defined system so that there will be no risk of using an incorrect hose type.

The properties of LNG fuel is different than the conventional oil hence the crew involved in the bunkering of LNG should use these additional PPEs apart from the basic ones:

The engine room and deck crew work together in preparing for the LNG bunkering operation. Once the LNG bunker ship arrives, both the ship’s crew moor them with each other.

The pre bunkering checklists of both the ships should be signed off by both parties prior to the operation. The master of the cargo/ passenger ship and representative of LNG bunker ship or truck must agree in writing regarding the transfer procedures, i.e. the maximum loading or unloading rates and modes of communication etc.

Other checks shall include the following: 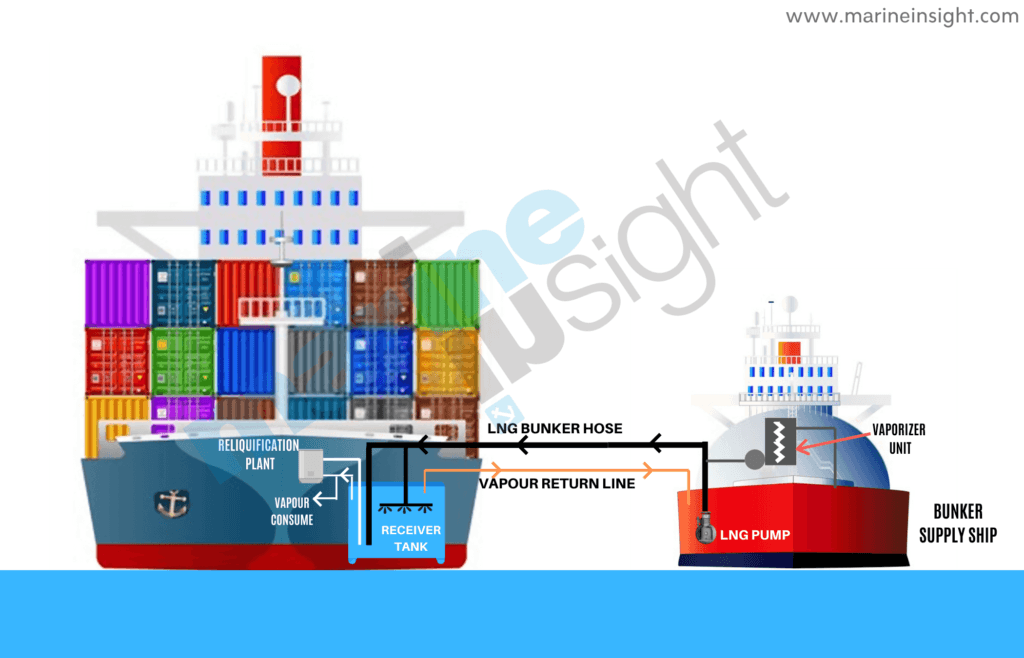 Once the LNG bunkering operation starts, dedicated ship team members must keep checking the bunker station and filling tanks for the following:

If the watchkeeping officer and crew detects a single issue, the bunkering operation must be stopped immediately either by communication or the use of Emergency Stop Device depending upon the nature of the problem.

Once the supplier communicates that the quantity of LNG fuel decided has been transferred, the pumping will be stopped or during the top up, the pumping rate will be reduced and then stopped.

LNG in lines is allowed to vaporize and displace the remaining liquid back to the tanks.

The pipes and hoses used for bunkering will be inerted

Ship officer will confirm if bunker hoses, manifold, and piping are properly drained and free of residual LNG

The mooring lines will be open and the castaway. The same to be recorded in ship’s logbook and informed to the port authorities

A Guide To Verified Gross Mass (VGM) For Shipping

Role Of Seafarers In Budgeting And Cost Management On Board Ships

5 Important Drains in the Ship’s Engine Room
Want to share your tips and advice? Got questions? Visit the community forum to ask questions, get answers, meet people, and share your tips!