A passenger ship was inbound in daylight and fair visibility. The Master gave the pilot a briefing regarding the ship’s manoeuvring
characteristics; the ship was highly manoeuvrable and would ‘turn on a dime,’ he said. The Master told the pilot that a three-degree helm order would create a rate of turn of 10-15 degrees per minute.

Finally, the second officer would be in charge of plotting the ship’s position on the navigational chart. 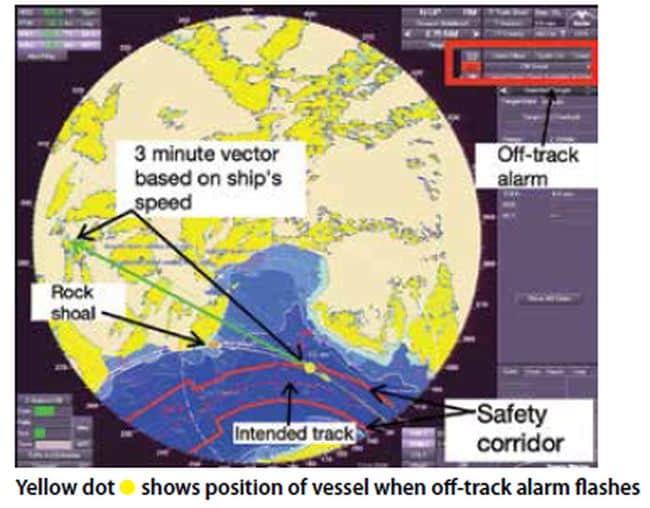 The pilot and the Master discussed and agreed the intended passage plan, noting a strong flood tide that would be running astern. However, the subsequent investigation found that, due to miscommunication during the exchange, the passage inwards began with the Master and pilot having different understandings of how the first turn would be conducted.

The ship was lined up with the leading navigation lights and entered the channel without incident. As the pilot took the con the Master briefed the staff captain on the Master/pilot exchange and explained his understanding of how they were going to negotiate the turn to port.

The rest of the bridge team were not included in this conversation and essentially relied on what they overheard.

Under the pilot’s con, the first alteration of course to port was initiated using three degrees of port helm. At this time the vessel had a speed over ground (SOG) of nearly 18 knots. The initial helm order was followed by successive increases to five and then 10 degrees of rudder.

About one minute after the initial three degree port helm order an offtrack alarm flashed on the ECDIS, but this information was not brought to the attention of the Master or the pilot. The alarm appeared only as a visual indicator on the radar screen because its audio had been muted prior to the ship entering the channel (see VDR screen capture).

Even so, the Master and pilot soon realised that the ship was proceeding dangerously close to a known rock shoal, so 20 degrees of port rudder was ordered, immediately followed by maximum port rudder. About three minutes after the initial helm order of three degrees, and despite the emergency helm order, the ship’s bilge keel and the starboard propeller made contact with the rock as the ship passed.

The ship was then navigated back to the centre of the channel and continued on its passage to port without further incident.
The official report on this accident discusses the concept of allowing a ship to depart from an intended track in the belief that other influences, such as tide in this case, would return the ship to the intended track. The report notes that this carries a high risk when manoeuvring large ship in narrow waterways where margins for error are small. The report posits that there is less risk when a ship is kept strictly to the intended track by increasing or decreasing its rate of turn in response to the external influences such as tide and wind. This method has the advantage of being unambiguous for other members of the bridge team tasked with monitoring the progress of the ship against the planned track.