A vessel in port was being discharged. Once the cargo above the tween deck had been offloaded, the deck crew needed to shift the pontoons with the vessel’s crane to facilitate discharging cargoes below. Pontoons 6 and 7 were shifted and stacked at the planned positions.

Two rigging crew moved from the aft access space and re-entered the cargo hold to unhook the lifting wire slings for pontoon 7. Then pontoon 8 was lifted and slowly swung towards the aft bulkhead where it was to be stowed. The same two crew had returned to the protected area in the aft access space and were waiting to unhook the lifting wire slings from pontoon 8.

When pontoon 8 was about 4m away from the aft bulkhead and being gently moved into position, one of the hold crew asked the crane operator via the VHF radio to stop the movement of the pontoon so that he could climb out of the aft access space, walk over pontoon 7 and climb on to pontoon 8. 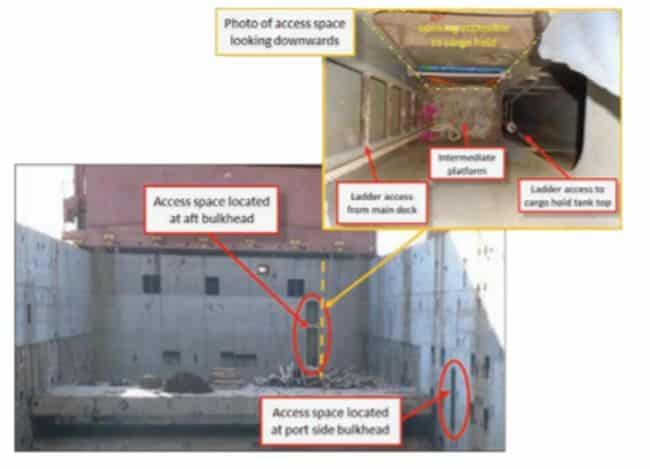 Once the momentum of pontoon 8 had stopped (now about 3m away from the aft bulkhead), the crew member climbed on to it. Standing on the pontoon, he signalled to the crane operator to continue moving the pontoon towards the aft bulkhead.

At the same time he shouted across to the other crew in the aft access space to stay within the protected area. When the pontoon was about 1m away from the aft bulkhead, the other crew member suddenly exited from the aft access space, raising one leg to climb on to pontoon 8, which was now moving again. The crane operator saw the danger but could not stop the pontoon’s movement in time.

The crew member’s chest was crushed between the edge of pontoon 8 and the aft bulkhead. The pontoon was cleared and the victim attended to but on the way to the hospital he succumbed to his injuries. The official investigation found that, among others: l The first crew member opted to enter the cargo hold before the pontoon was stacked in its final position.

Despite being part of the same team to unhook the wire slings from the pontoon, there appeared to be a lack of coordination and communication between the two crew members. Being new to the company, the victim probably followed the actions of the first crew member by instinct.

Although a risk assessment was carried out in line with the company’s SMS procedures, it did not cover the proper positioning of personnel during pontoon shifting operations, especially in situations where the access openings may be blocked by stacked pontoons.