During maintenance, the second engineer noted that the free-fall lifeboat release system hydraulics appeared to be losing oil and he wanted to personally confirm that all was in order. In order to enter the craft, the free-fall release safety pin had to be withdrawn. Once inside the lifeboat and after topping up the reservoir with oil, he decided to pressurise the system and identify any obvious oil leaks. After pumping the handle three or four times he felt the lifeboat shudder and move. (Under normal circumstances, the lifeboat’s hook release device would require about 10–12 cycles of the hydraulic pump to trip the on-load release.) He saw that the lifeboat had begun to move down the launching rails; as there was no time to escape, he sat down in a seat and attempted to fit the seatbelt. The two simulation wires, in place to allow for launch training but so as to prevent an actual launch, failed under the shock load and the lifeboat launched into the sea.

On the bridge, the OOW was alerted by crew who had witnessed the launch. He immediately activated the ship’s general alarm, slowed the ship, and made an emergency announcement over the public address system. Meanwhile, although injured, the second engineer was able to start the lifeboat motor and manoeuvre close to the ship. He was recovered soon afterward and later diagnosed with a fractured kneecap. 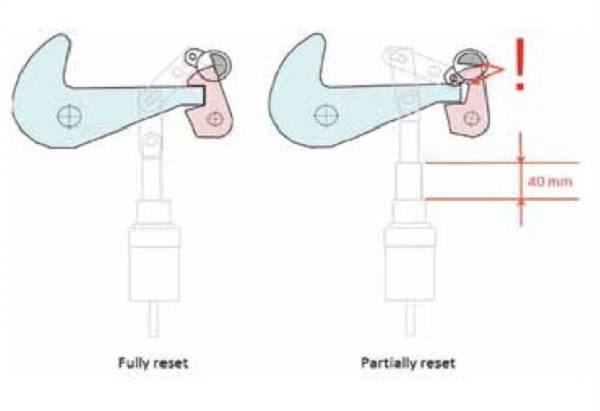 During the investigation it was discovered that the oil level was not actually low; oil had remained in the ram and had not returned to the pump reservoir. Additionally, it was found that the reset alignment arrows could indicate that the hook was in the correct reset position, even if it was actually only in a partially reset position. This condition was not apparent because of a cover fitted over the release mechanism and the lack of an indicator for the release linkage to indicate if the ram had fully retracted (or not). Thus, the on-load release was unintentionally tripped after only four operations of the hand pump, because it was only partially reset.

Yet, even when released, the lifeboat should not have ended up in the water. Many other factors contributed to the final, rather wet, outcome, including the following: