You are here: Home › Videos › Watch: Vessel Collides With Bridge, Knocks Over Containers Into River
TwitterFacebookLinkedInPinterestBuffer

A ship from Duisburg reportedly collided against the huge Willembrug at Rotterdam, on the 1st of July, 2020 at midday, which sent six of the containers on the ship toppling into the river.

Willemsbrug, commonly known as Willem’s bridge was built in the year 1981, located in-river from the port of Rotterdam. Painted bright-red, the common opinion is that it would have been a hard sigh to miss prior to the collision.

Unmistakably overloaded for its capacity, the colliding German freighter ‘Rhenus Druisburg’ had halted all operations on the eastern seaside of the port following the accident with the lower horizontal support of the bridge. The Rotterdam port, presumably the biggest port in all of Europe, saw no hindrance to its western operations. 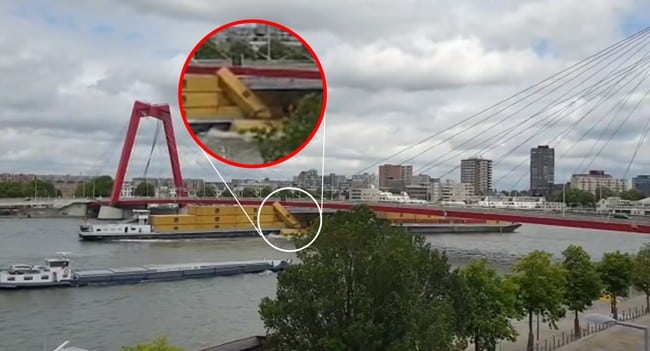 This led to swift action by the local officials rushing to recover the containers fallen into the ‘Nieuwe Maas’ river and resume port operations. the bright yellow containers were empty and at least 3 had been recovered before the ship set sail again after it stayed stuck throughout the day.

Tweets and images of the collision surfaced on the internet almost immediately after it occurred, with images and videos that are now doing the rounds. Shipping traffic on the river is currently restricted by the police.

The charter company of the barge is awaiting a meeting with the skipper of the inland vessel before making any official announcements. Eyewitnesses have claimed to have heard the huge bang of the accident.

Traffic on the bridge was shut down swiftly, with no injuries or severe damage reported, although some pieces chipped of the bridge are hanging off the edges.