Two massive cryogenic storage tanks were delivered and are being installed by Eagle LNG Partners for Crowley Maritime Corp. at a new shore-side liquefied natural gas (LNG) bunkering facility being constructed at the Port of Jacksonville’s Talleyrand Marine Terminal (JAXPORT).

The accompanying new video highlights this latest development in Crowley’s Commitment Class project, which will transform the way the company delivers supply chain solutions between the U.S. Mainland and Puerto Rico. 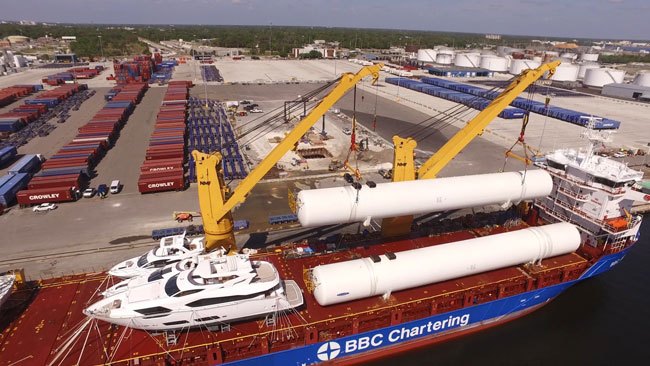 The LNG bunkering facility is among the first of its kind in the U.S and will fuel Crowley’s two new LNG-powered, combination container/Roll-on Roll-off (ConRo) ships. Eagle LNG’s Maxville, Fla., natural gas liquefaction plant, which also is under construction, will supply LNG for the tanks.

The 260-ton tanks, which are 170 feet long – exceeding the width of an American football field – were manufactured by Chart Ferox in the Czech Republic. Crowley’s logistics group managed the transport of the tanks, first via river barge to Hamburg, Germany, and then via a specialized heavy-lift ship that sailed more than 4,000 nautical miles to arrive in Jacksonville on March 26 for offloading.

“The highly anticipated arrival of these remarkable LNG storage tanks is an important milestone in our project. It further demonstrates we are firmly in the era of LNG fueling,” said Sean Lalani, president, Eagle LNG.

With an outer diameter of 19 feet, each tank features an inner shell to hold the product and an outer shell that is insulated and kept under vacuum, to keep the LNG cold. The tanks have a rating of negative-320 degrees Fahrenheit, and each can hold 1,000 cubic meters (approximately 265,000 gallons) of LNG.

The tanks are fitted with two internal LNG pumps, each of which can deliver a flow rate of 900 gallons per minute with the ability to run multiple pumps for a maximum of 2,400 gallons per minutes at peak load rate. Each tank holds sufficient product to fuel Crowley’s two LNG-powered vessels within an eight-hour period.

The design of the Talleyrand LNG fuel depot was developed jointly by Eagle and Crowley’s LNG engineers in consultation with JAXPORT, the U.S. Coast Guard and the Jacksonville Fire and Rescue Department. The new bunkering terminal utilizes state-of-the art technology to allow safe and efficient transfer operations in a working cargo terminal while minimizing the overall terminal footprint.

Designed specifically for service between Jacksonville and Puerto Rico, the Commitment Class ConRos, El Coquí and Taíno, will use clean LNG as their primary fuel, providing significant reductions in emissions as compared to existing fossil fuels. El Coquí, which was launched March 20 , is expected in service in the second half of 2017, and the Taíno is expected to begin service in the first half of 2018.

“The new bunkering facility, which we are developing with our partners, Eagle LNG and JAXPORT, demonstrates Crowley’s commitment to service innovation, particularly as it relates to utilizing a cleaner, more eco-friendly fuel for our new ConRo ships,” said Tucker Gilliam, Crowley’s vice president of special projects. “The net result of this and other major investments in our Puerto Rico service will be a faster, more efficient and environmentally-friendly supply chain solution for our customers.”

The Talleyrand LNG fuel depot is expected to be operational in late summer 2017 prior to arrival of the first Crowley ship.

The Commitment Class project by Crowley features a $550 million investment that includes the next generation ships as well as a new 900-foot pier, three new specialized cranes, and new gate and terminal operating systems at the company’s Isla Grande Terminal in San Juan, Puerto Rico.