ABB, the leading power and automation technology group, achieved an important project milestone by installing DolWin beta, the world’s most powerful offshore converter station in the North Sea. The 320-kilovolt converter station, housed on an offshore platform, has a 916 megawatts (MW) power transmission capacity, making it the world’s most powerful installation of its kind, enough to power more than 1,000,000 households with clean energy.

“After the successful handover of the DolWin1 link in July, this is another key milestone in the execution of our offshore wind projects,” said ABB CEO Ulrich Spiesshofer. “It is a further example of our focus on relentless execution and of the ongoing progress in the Power Systems division’s Step Change program.” 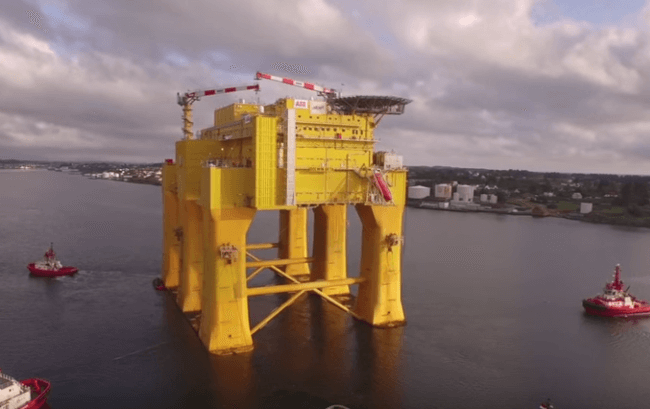 DolWin2 is part of Germany’s energy transition roadmap, called “Energiewende”, which foresees the generation of more than 6.5 gigawatts (GW) from offshore wind by 2020 and 15 GW by 2030. The DolWin1 grid connection, which ABB commissioned and handed over to transmission system operator TenneT at the end of July 2015, also contributes to this goal.

The complete platform including substructure weighs around 23,000 tons and is around 100 meters long, 70 meters wide and 100 meters tall. It was transported last year from Dubai, where it was built, to Aibel’s shipyard in Norway. Here, the platform was outfitted and one week ago sailed away to arrive after a short transportation phase of four days at its final destination in the DolWin cluster, 45 kilometers off the German coast. DolWin beta utilizes an innovative self-installing gravity-based structure (GBS) concept, whereby the platform is slowly ballasted down to the seabed by filling the six columns with water, which will in the coming weeks be completely replaced by gravel to permanently secure the platform.

“Putting such a huge platform in place is one of the most delicate operations in the delivery of an offshore power link, requiring intensive pre-planning and cooperation between the stakeholders involved and we are pleased that this important project landmark has gone smoothly,” said Claudio Facchin, President, ABB Power Systems division.

HVDC is the technology of choice for transmitting large amounts of power, over long distances, efficiently and reliably through overhead, underground and sub-sea links with minimum losses. It is ideally suited for the integration of remotely located renewable energy sources like offshore wind, desert solar or mountain-based hydropower. It is also being increasingly deployed to create cross border interconnections – to strengthen grids and improve the reliability of power supplies. This is a key focus area in ABB’s Next Level strategy.

ABB has been awarded about 100 HVDC projects since it pioneered the technology more than 60 years ago. This represents a total installed capacity of more than 120,000 MW and accounts for around half the global installed base. ABB further developed HVDC in the 1990’s by introducing a voltage sourced converter (VSC) solution named HVDC Light® and leads the way in this technology, having delivered 16 out of 22 VSC HVDC projects in commercial operation around the world.