On 4th September morning a huge mobile crane placed the five-blade ship propeller in front of the main entrance of Hamburg’s fair centre “Hamburg Messe”. The propeller is a headturner at this year’s SMM, the leading international trade fair of the maritime industry.

Weighing in at around 80 tonnes, with a diameter greater than nine metres and a total blade surface area of 42 square metres, the ship propeller made by Mecklenburger Metallguss GmbH (MMG) is an impressive head-turner at this year’s SMM, the leading international maritime trade fair. With several MMG employees assisting, the impressive piece was set-up at the main entrance to the fair centre, right next to Hamburg’s television tower, on Thursday morning around nine o’clock. It now serves as a landmark for the SMM fair held at the Hamburg fair site from 9 to 12 September. 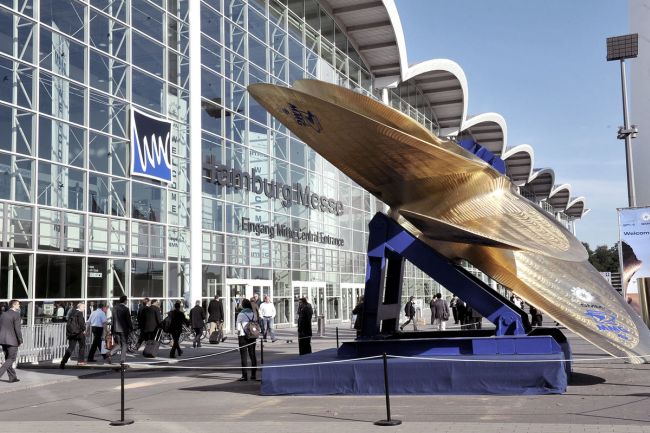 The five-blade propeller was built for E.R. Schiffahrt. The Hamburg-based shipping company will install propellers of this innovative type on 13 new containerships with a capacity of 7,850 and 13,100 TEU, respectively. “We are determined to cut the fuel consumption and emissions of our ships. To achieve this we are currently retrofitting our fleet, investing roughly $30 m in new bulbous bows and propellers this year alone,“ says Dr Hermann Klein, CEO of E.R. Schiffahrt.

This refitting programme translates to immediate competitive advantage for the shipowner: “This propeller is one of several measures that are being taken to cut fuel consumption by 700,000 tonnes and CO2 emissions by 2.1 million tonnes over the next ten years,” says Manfred Urban, Managing Director of Mecklenburger Metallguss GmbH. MMG, headquartered in the German state of Mecklenburg- West Pomerania, has been building ship propellers for more than 60 years, including the largest and fastest ever made. The heaviest propeller in MMG’s portfolio weighs in at an impressive 130 tonnes and will make up to 150,000 revolutions per day once installed on a ship. Year after year about 100 of these glistening masterpieces in all sizes leave the factory in Waren upon the Müritz river, following an extremely sophisticated manufacturing process.