In early 2013, a brand new $40 million oil platform sank within few seconds during installation in the Persian Gulf. Belonging to Iran’s Oil Pars Oil and Gas Company, the oil rig sank even before the workers could get a chance to escape the disaster safely.

The scary video below shows panicked oil workers trying to escape the sinking oil rig, which disappears below the water within no time. Though unfortunately no one was able to disembark before the oil rig sinks, according to the reports, all the workers were rescued and taken ashore safely. 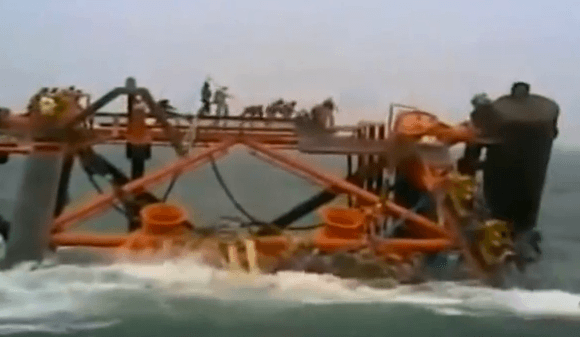 The oil rig was built by SADRA, an affiliate of the industrial wing of Iran’s Revolutionary Guards, over a 30-month period. The incident occurred as the 1,850-tonne jacket developed for South Pars Phase 13 sank to a depth of 80 meters.
There were no reports of casualties.

Watch the Shocking video of people trying to escaping as the oil rig sinks:

Note: We do not have confirmed information on the accident. If you have more information about the event, please do let us know in the comments below.