If there is anything worse than sheer negligence of seafarers at sea, it is the lack of common sense and knowledge to quickly act in an emergency situation arising out of such negligence. This video aptly demonstrates the lack of professionalism and seriousness among these seafarers.

We do not have much knowledge on the video, but it is clear that these people are trying to launch a fast rescue boat when the ship is underway. The launching process goes terribly wrong, as the craft almost tips, throwing the people overboard. What is more surprising to watch is the ship crew’s inability to act quickly during the man overboard situation. The crew members just stand staring at the craft from the deck, as the people from the craft go overboard and disappear into the sea. 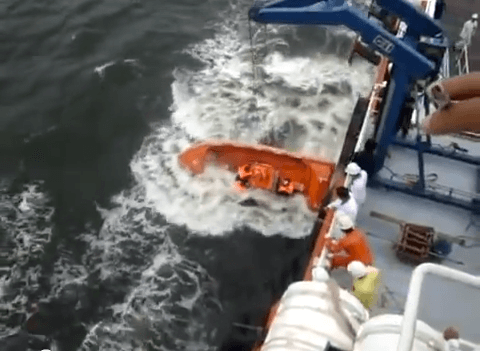 It’s embarrassing to watch the video, as the people on board the craft struggle while the ship’s crew stand as mere spectators.

Watch the video to get a sense of the height of stupidity and lack of professionalism of these ship’s crew:

Do you have any information on this video? Let us know in the comments below.