The cutting-edge ‘Cecon Pride’ has been built at Davie for export to Norwegian Oilfield Services company, Cecon. At 130 meters long, the Cecon Pride has been built to conform to the high standards required for deepwater operations in harsh environments. 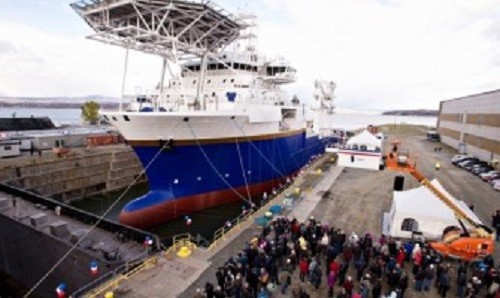 Hull 717 floated in the Champlain Dry Dock on Saturday 19th October 2013. The vessel will soon begin sea-trials prior to final delivery to the client in February 2014. Hull 717 is the first of the three-ship VS4220 design series being built at Davie.

Alan Bowen, CEO of Davie commented “This is a great day for Davie. There are only a handful of shipyards across the globe, mainly in Europe, capable of building a vessel to this specification and with this level of technology. Our high quality vessel construction capabilities and low cost base means we are the only North American shipbuilder competing internationally, exporting vessels to European shipowners; something Davie has done for over a century.”

Riulf Rustad, Chairman of Cecon added “We are incredibly pleased we havereached this important milestone and look forward to final delivery after seatrials”